The Deep Frustration of ‘the Salalah Shuffle’ 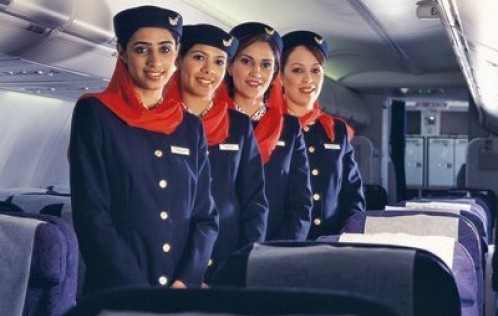 Anyone who flies Oman Air regularly between Salalah and Muscat will immediately know what I’m talking about. Someone had to write about it eventually. It’s just too comical to ignore.

Last week I was in Muscat and on my last day I had to attend an all-day meeting then immediately head to the airport to catch my flight back to Salalah. By the end of the day, I was exhausted and looking forward to a smooth flight home.

I checked in early to make sure I was guaranteed a window-seat, and the woman at the business class counter cheerfully confirmed she had secured it for me. I thanked her profusely and headed off to the superb Oman Air business class lounge; one of the perks of being a loyal Sindbad Silver member.

If my air miles were credited to my account accurately, I’d probably be Gold by now, but I don’t mind. I’m a pretty content flyer as long as I get my window seat. Did I already mention that?

When I reached the designated gate for my flight, my heart began to sink. I counted at least 20 veiled women waiting at the gate. This could only mean one thing; The Salalah Shuffle was bound to happen. Despite my intense prayers as we boarded the flight, luck wasn’t on my side that night. A very large veiled woman was planted firmly in my seat when I arrived.

I sighed and handed the cabin crew member my boarding pass. Without batting an eye, she directed me to an aisle seat a few rows down. I told her I had specifically requested a window seat but she repeated again that I had to move to the aisle seat.

I gritted my teeth and settled down in the new seat. I didn’t bother putting my bags up in the overhead bins because I knew I’d be shuffled at least one more time before the flight took off.

Within a few minutes, a tired looking man arrived and informed me that I was sitting in his seat. I stood up and apologised, explaining my situation. He nodded and confirmed that he was familiar with the Salalah Shuffle.

After consulting a cabin crew member again, I was shifted to yet another seat. By this time, all hell had broken loose on the flight. There were stubborn women blocking the aisles because they refused to sit next to any strange man. Other women had simply taken over empty seats and refused to move, as was the case with my precious window seat.

Honourable men jumped up from their seats and swore they’d give them up for any woman. Frustrated tourists were trying to understand what was going on. Cabin crew members were frantically trying to seat and re-seat everyone so the flight could take off on time.

And that my friends, is the Salalah Shuffle.

After being moved three times, I was finally assigned a middle seat at the back of the plane between two annoying people who hogged the arm rests the entire flight. Boy was I glad to get home that night!

If you’re not familiar with the Salalah Shuffle and think I’m exaggerating, rest assured that I’m not. I have been on over 35 flights between Salalah and Muscat in the past twelve months. If I’m not qualified to write about this, then I don’t know who is. I am a survivor. With every flight from Muscat to Salalah I am prepared for the inevitable chaos that will surely ensue.

Sometimes I’ll be settled in my seat when a cabin crew member will approach me and beg me to change seats because a stubborn woman somewhere is refusing to sit next to a man and somehow I look like a friendly person who doesn’t mind switching seats.

Most of the time I’m happy to oblige because I feel sorry for the flight’s cabin crew. The Salalah Shuffle is a bigger nightmare for them than it is for people like me.

You may be thinking cabin crew should just be stricter with their arrangements. That’s true. However, when an elderly woman (or several!) has taken over someone else’s seat and refuses to move, how do you deal with a situation like that?

You can’t delay the flight or force her to move. It simply doesn’t work. Shuffling and re-shuffling passengers is extremely frustrating and a complete waste of time. Furthermore, for security reasons I assume it’s important to have people seated in their designated seats.

Why not look for a win-win situation? Society in Salalah is still very conservative and I fully understand women’s hesitation to sit next to a strange man. My humble suggestion to Oman Air at this point is to unofficially dedicate the back few rows of every flight between Salalah and Muscat to women. Surely that can’t be too hard, right?

Whenever a woman checks in, send her to the back. It’s the same as dedicating the first row to women with babies. There’s a logical solution to any problem, and as far as I’m concerned the Salalah Shuffle has gone from being deeply amusing to plain annoying. Makes you wonder how Saudi Arabian airlines function!