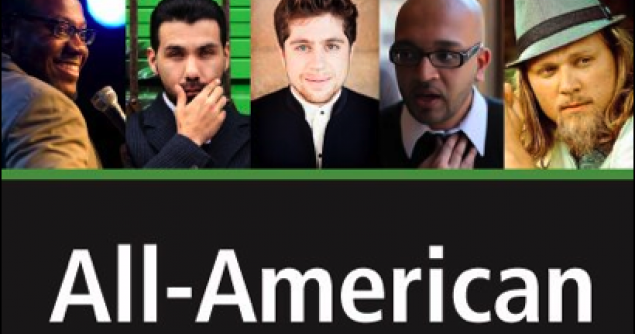 Terrorist. Jihadist. Misogynist. Brown. Bearded. Un-American. These are the terms and images often associated with Muslim men in America. A compilation of autobiographical essays by Muslim American men, All-American: 45 American Muslim Men on Being Muslim, presents a series of personal accounts that counter these assumptions and stereotypes.

This up close and personal look into the lives of Muslim Americans is the second instalment in the I Speak for Myself series, a set of anthologies of interfaith and intercultural narratives. The first book focused on the stories of Muslim American women.

Zahra Suratwala, co-editor for both books, explained the inspiration for these anthologies, saying: “There seemed to be a lot of people talking about what Islam is and what Muslims are like, but not many of them seemed to be Muslims themselves. We sought to fill what we saw as an obvious gap in the dialogue about Islam and Muslims.”

Wajahat Ali, co-editor for All-American: 45 American Muslim Men on Being Muslim, writes in the introduction that sharing personal stories is the best tool and has the most powerful impact in addressing areas in which dialogue is difficult. Citing the Qur’anic passage, “Oh you who believe . . . we have made you different nations and tribes, so that you may know one another” (49:13), he points out that “getting to know one another” most often happens through the sharing of personal experiences, which is what each essayist does in this book.

The men featured in the book include Jason Moy, an attorney for the United States Army Judge Advocates General Corps; Hasan Minhaj, a comedian; Amer Ahmed, comptroller for the city of Chicago; Mark Gonzales, a poet and educator; Shahed Amanullah, Senior Advisor for the Special Representative to Muslim Communities at the US Department of State; Kamran Pasha, a screenwriter and director; Michael Muhammad Knight, a novelist; and Suhail Khan, an attorney and Chairman of the Conservative Inclusion Committee.

The men featured in the book are loving husbands, fathers, brothers and sons; they are brown, black, white and every shade in between. Some men write about their struggles with faith at various stages in their life. Some men share their struggles growing up in, or coming to, America, while others reflect on the inspiration they found in the intertwined aspects of their Muslim American identities. None see their faith as a contradiction with being American. All clearly desire and are working hard to achieve their own American dream.

For example, Khaled Beydoun, an Arab American and a lawyer, writes about overcoming adversity and his childhood growing up in Detroit, Michigan in a single-parent home while relying on government aid. He describes how he struggled academically as a student, failing his freshman year of high school, which landed him in summer school and became the turning point for his academic and personal growth. His essay is based on a talk he now gives to students in Detroit, many of whom are facing the same struggles he did.

“Muslims are viewed as a model minority [in America]”, he says. “They have done well economically, for the most part. My story conveys an alternative narrative —that there are Muslim Americans who have had to struggle; not all come from privilege.”

Mohamed Geraldez, a Filipino American and entrepreneur, also writes of overcoming extreme financial and personal difficulties growing up in an immigrant family and his later spiritual struggle to gain acceptance with his family after he converted to Islam during his junior year of college. He, too, hopes to inspire those who read his story to overcome their own challenges in life and to understand that not all Muslim Americans share the same narrative, as many seem to assume.

“I want people reading this to see that Muslims are not a monolith”, Geraldez says, adding, “The American Muslim community is quite colourful and to paint an entire community with one broad brushstroke is wrong.”

His frustration with the pervading notion that all Muslims are the same is shared by each contributor in the book. For much too long their story – the story of the American Muslim man – has been told by others. This book is their chance to speak for themselves and tell their stories to others.

All-American by no means encompasses the complex diversity of the nation’s Muslim men entirely, but it does offer a unique and unprecedented insight into the lives of Muslim American men beyond the headlines.

Nadia S. Mohammad is an Associate Editor of AltMuslimah.com. You can follow her on Twitter at @nadiasmo

One Response to ‘Stereotype Killer’: Muslim Men Speak About Lives