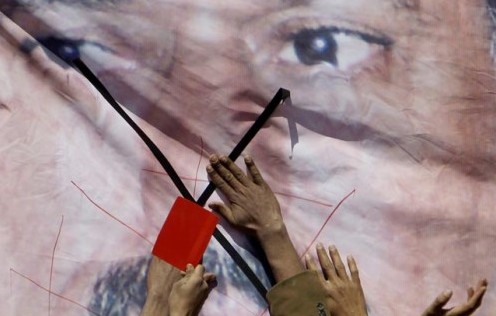 In the presidential palace in Sana’a, a new Yemeni cabinet has just been sworn in. For the first time in 33 years, however, President Ali Abdullah Saleh is nowhere to be seen. He has officially signed away his powers, setting up a potentially peaceful transfer of power to his deputy, Vice President Abd-Rabbu Mansour Hadi. Indeed, it was Hadi who was present at the swearing in ceremony, exercising the ceremonial powers of a president.

The new Yemeni government is a government of national unity, split evenly between members of Saleh’s ruling General People’s Congress (GPC) and members of the opposition coalition, the Joint Meeting Parties (JMP), as well as independent opposition figures. The new government will face great difficulties in establishing itself, mainly because rival military factions still hold great sway in the country. However, it must be backed, as national unity is the only hope that the country has of avoiding a disastrous civil war.

Since the protest movement began in Yemen in the early part of this year, Saleh has promised again and again to sign the Gulf Cooperation Council initiative to step down and hand over power. While he delayed his departure, his troops fired upon unarmed protesters, killing hundreds. At the same time, deadly clashes took place across the country between pro-Saleh military units and pro-revolution military units and tribal fighters. This fighting has destroyed parts of Sana’a, Ta’iz and Arhab, as well as other towns and districts.

In the past few months, there has been a very real fear that these clashes might be the start of a new civil war in Yemen, only 17 years after the conclusion of the previous one. The North-South split that caused the civil war in 1994 is rearing its ugly head again, with the Southern separatist movement taking advantage of dwindling government control to bolster its presence on the streets.

In this difficult and unstable period, the country needs a government that represents everyone. The country needs change, but the revolutionary movement must also acknowledge that President Saleh has his supporters – and that they cannot be ignored if there is to be any hope of a peaceful future. Post-2003 Iraq is a prime example of what happens when all those associated with the former ruling regime are shunned.

It is also important that Southerners have their grievances addressed. Their land and resources have been controlled too long by members of the Northern elite. The naming of Southerners in leading positions, including Vice President Hadi, Prime Minister Mohammed Basindwa and others is a positive first step in attempting to show that the perceived Northern domination of the South is over.

Yemen’s most famous woman, Nobel Peace Prize laureate Tawakkol Karman, is not amongst the new ministers in the unity government, but three other women are, marking a record for any Yemeni government. While it may not seem much in this patriarchal society, the emergence of women at the forefront of the protest movement may be one of the country’s greatest legacies. The increased number of women in the cabinet reflects this step forward.

Vice President Hadi is likely to be the only candidate in the upcoming presidential elections, scheduled for 21 February. If he wins, he will take power for a two-year transitional period. This period is vital for Yemen’s future.

Hadi needs to assert his own authority, which will be extremely difficult – especially because he does not have any military or tribal power base. However, this can be turned into an advantage. As he has no overt ties to the previously warring factions, and has the support of the international community, the compromise candidate may be able to hold Yemen together long enough for the lengthy process of rebuilding the economy to start.

The youth movement contains some of Yemen’s brightest minds. Convincing them to stay in the country and take part in the political process will be a major coup for the incoming government.

Hadi, alongside the new Yemeni government, needs to show Yemenis that change has happened. This will be a challenge when some of those figures with ministerial posts have been part of the clashes. Therefore, the new government must ensure transparency and show that one of the main blights on Yemen – the endemic high-level corruption – can be fought.

Yemenis need to move away from thoughts of revenge and instead focus on the country’s unity and work on issues like corruption, poverty and the water crisis. If a new government focuses on these issues then Yemen could be well on the way to achieving the results that the Yemeni people have been calling for in protests the past 11 months.

Abubakr Al-Shamahi is a British Yemeni freelance journalist and editor of CommentMidEast.com, a platform for young people to write about the Middle East and North Africa.