If Saudi Can Impose its Will Over Dress, Why Not France? 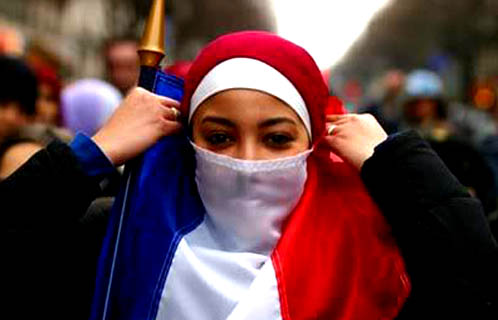 As France’s new law banning face veils went into effect on April 11th, more than twenty veiled women and dozens of others have been arrested in protests at Notre Dame Cathedral against the new ban. Belgium was the first country to pass a similar law last year, but Belgium’s ban has gone largely unenforced and unchallenged. Several other European countries are also considering passing laws which ban face veils as well.

People who go to Saudi Arabia to work or visit have to follow KSA’s laws. For example, practising another religion other than Islam is prohibited and proselytizing in KSA is punishable by death. Also, if a man and a woman who are not married to each other are caught alone together, they will likely be sentenced to jailtime and lashings. These are examples of existing laws in KSA, and even though most other countries do not have laws like these, they must be followed or suffer the consequences.

Arab News published this article about how there is mixed reaction among Saudi women about the new French law. It quoted Sarah Kazim, a 30-year-old housewife, expressing her feeling that people everywhere should respect the laws of each individual country. “If women are made to dress a different way and wear their hijab in Saudi Arabia and we respect it, then we should respect the laws of the French constitution. Why treat them differently when we have laws that are most distinct to any other country?”

While I believe in freedom and choice, I am leaning toward agreeing with Sarah Kazim.

Since I moved to Saudi Arabia in 2007, every time I step out the door, I must wear a black cloak (abaya) because, as my husband says, “It’s the law of the land.” He also insists that I cover my hair for the same reason, although in Jeddah, one can see some women without head coverings (hijab), especially at the malls. However the vast majority of women in Saudi Arabia not only cover their hair, but they wear the face veils (niqab) as well.

Saudi women supposedly wear all of this garb because it is “their choice.” This is not a religious requirement, nor is it a law. It is a cultural thing, although the women’s dress code is enforced by the religious police who have been known to whack women on the ankles with a stick if too much ankle skin is showing.

All I know is that I feel I am forced to wear the abaya and the hijab when I’m in Saudi Arabia – because it would not be my choice to dress like that. And I doubt if I am the only woman in KSA who feels that it is not my choice.

2 Responses to If Saudi Can Impose its Will Over Dress, Why Not France?