Popular and Acclaimed: The Voice of Arab Women? 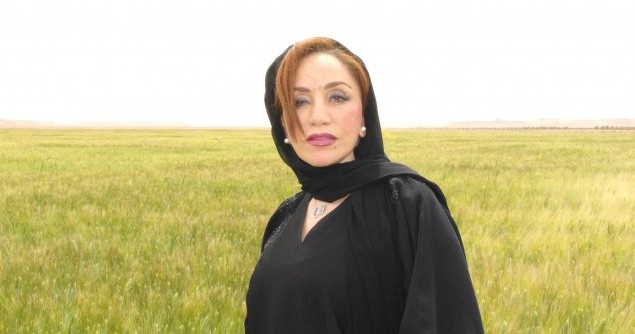 I was at first stunned to see the note from the Abu Dhabi International Book Fair,  announcing that Ahlam Mosteghanemi would be visiting this year’s fair. No, not stunned that the popular Algerian novelist would come to ADIBF, but that her latest novel, Black Suits You, had sold 100,000 copies in its first two months. I certainly can’t verify this number, but upon reflection: sure, okay, why not.

Mosteghanemi’s writing has both its fans and detractors. Her Memory in the Flesh received the Naguib Mahfouz Prize for Literature in 1998 and was also on the Arab Writers Union’s list of the “top 105” books of the previous century. Her latest book, Black Suits You, is on the longlist for this year’s Sheikh Zayed Book Award.

In writing on Memory in the Flesh after it received the Mahfouz Prize, Dr. Ferial Ghazoul said, that Mosteghanemi ”settles her accounts beautifully with the white page” and said she is ”remarkable in her ability to embody convincingly a male voice who constructs this extraordinary tale of passion, and as Abdel-Moneim Tallima commented, ‘Ahlam Mosteghanemi goes beyond the common notions of the masculine and the feminine to present a humane horizon.’”

But Mosteghanemi’s writing can also be sloppy, repetitive  and reductive, as in her Nissyane.Com, translated as The Art of Forgetting. One Jordan-based blogger felt that Mostaghenemi, “the new Arab relationship guru, gets all her popularity by polluting women’s minds into thinking that men are scum and that women are the victims who should arm themselves by the art of forgetting, not caring, and not wanting.”

And yet Mosteghanemi — who has been swamped with fans at the Abu Dhabi Book Fair in the past, and surely will be again — seems to be able to motivate readers to buy novels like nearly no other author. Twitter is filled with instagrams of the new book in different contexts, queries to bookstores (do you have it????), quotes, hashtags and endorsements from dozens of readers.

The book already has nearly 5,000 ratings on GoodReads and more than 1,000 reviews.

The Syria Times, mouthpiece of the Bashar al-Assad government, even felt the need to review the novel, condemning the book because “once she was against terrorists who targeted artists, Journalists, a civil servant [sic]” but later “she sympathized with them over being tortured by the Algerian Army.” (Uh, cough. Odd, that…sympathizing with people being tortured.)

Mosteghanemi has not had the same success in English translation. She was not pleased with her arrangement with AUC Press, and became the first writer to sign on with Bloomsbury Qatar for The Art of Forgetting, which was translated by Raphael Cohen and received with relatively little fanfare in English.

Along with her feelings on love and relationships, Mosteghanemi also has strong ones about the Arabic language. Black Suits You was dedicated, like Memory in the Flesh:

“To the memory of Malek Haddad, son of Constantine, who swore after the independence of Algeria not to write in a language that was not his. The blank page assassinated him. He died by the might of his silence to become a martyr of the Arabic language and the first writer ever to be silent, grieving, and passionate on its behalf.”