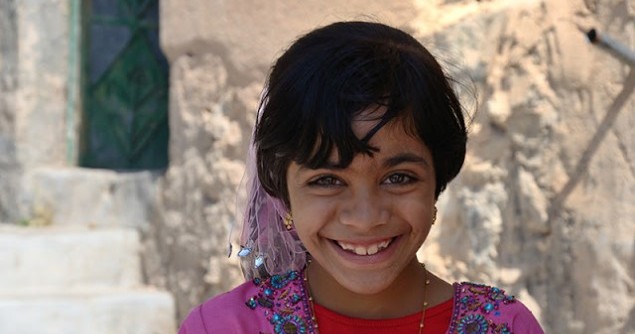 Imagine you’re just a quiet bloke. You live in the hills, just about as far away from civilization as you can manage. Your electricity trickles in on a single wire that hangs from a concrete pole that is currently being used as a butt-scratching device by the neighbourhood goat. Your water flows from one of ten secret mountain springs through a falaj system as ancient as your stories.

Your missus is outside cleaning the guts out of your sacrificial cow with your eldest son. Later, they’ll heave it into a pit filled with smouldering coals and cook it until the meat is so soft it dissolves in your hands. The mountain breeze whispers through your open door – it’s always open, to your family, friends, and even the feral kittens your daughter likes to bring home. And then you hear your granddaughter chirping from outside – “Jadda, these people want to take photos of me. Do we let them?”

Can you put yourself in that position? Pretend for a moment, that you are this man. The world we live in allows him to move if he wishes, but he stays here, in his village with its peace and tradition. And then, when tourists come, they take photos of his front door, the off-cuts of his forthcoming feast, his front garden, his drainage system, his grand daughter, and even the ruddy goat with the itchy bum.

In Australia, he’d set his kelpie on you, probably with a string of invective to accompany. In other places you may get shot for trespassing. And yet, in Oman, even on holy days (we visited over Eid al Adha), when the only words you can say are hello and thank you, this man will smile and shake your hand. Don’t ever say that people are unkind in the Middle East. You’d be wrong.

Al Ain is one of around thirty tiny villages scattered in the folds of the Saiq plateau, and one of the better ones to visit, not only because of friendly grandfathers and gorgeous little girls. This village takes up much of the vista that fills your eyes from “Diana’s Viewpoint” – famous for the princess who stood there, rather than the picture it presents. It continues its mountain life, suspended in time and apparently space, on the edge of its cliff.

It’s not just an old village, with it’s crumbling stone, timeworn paths, sagging foundations and secret tunnels. It’s also a working community. There are fields of corn, wheat and vegetables, tiny orchards of fig and pomegranate with their land eroding and likely to take the trees to the depths of the valley before too long. Further afield you’ll also find walnut, palms, grape vines, juniper and roses.

From here in Al Ain, you can also take a relatively easy walk to the nearby village of Al Aqr, and past the spring that feeds crystal clear water to the village. Al Aqr is famous for its roses, which are in bloom by April, and harvested in the traditional fashion just before the worst of the summer begins. At that time you can watch them harvest into terracotta urns for processing. At others, villagers will allow you to stumble through their tiny alleys, over lithic wadis, and almost off the edge of their cliffs, with the most incredible view in the world.

For some reason, even though I’ve lived nearby in the UAE for 5 years, I had forgotten just how exotic this part of the world can be.

The region is paradise for trekkers and amateur geologists. For those who want more information on the walks, it’s best to buy a guide or ask at your accommodation for a map (this will probably be hand-drawn). The Oman Off-Road Explorer is a bible. You must get a copy if you want to spend any serious time in the area. The maps are excellent, and without it, you will waste all your time driving up the wrong roads. They also have a website where you can ask questions about particular regions (although the site has little information). I have included a map that I have taken from various sources – click on it to zoom.

The better known walks are:

It’s fairly easy to do this yourself (despite the lack of decent maps online) – people really are very friendly so long as you behave. But you will need a 4WD to get past the checkpoint soon after Birkat al Mawz, or if you just find you get more out of a trip with a guide, then you could try one of the many trek and tour operators like the following:

This gets a little tricky. Unfortunately, Oman is still an emerging tourist destination, and so both information and the physical presence of secondary tourism businesses (like restaurants) is a little lacking. So apart from the above, I can’t help you out much with where to go. I CAN tell you what you should look out for:

There’s plenty more information available on the area on the web, but you need to know what you are looking for. Villages of course are spelled phonetically, and this can differ widely. Google maps only lists the Saiq village, however satellite images will show you where other villages and trails are. There’s so much more to it than I’ve mentioned here – if you can’t find the information online, ask at your accommodation. If you have the time, look up the Jebel Akhdar War, and find out why there is a military base in the area to this day. You can also find plenty of evidence of fighting in the relics left around the hills. Look up caving in the hills, and further out, towards Jebel Shams, particularly Al Hoota cave. And of course, if you’re in the area, look at some other antique architecture in Birkat al Mawz, Jabrin (Jibreen) and Bahla.

And say “Hi” to those lovely kids in Al Ain for me xx.