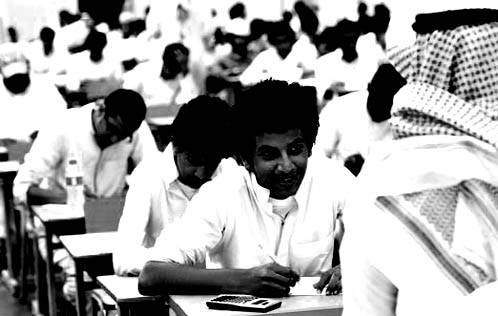 The Saudi unemployment rate is now over 10 percent.

The king has dumped billions into Education resources to try to prepare Saudis for the workforce; but despite record numbers of higher Education graduates and students entering training programs, and the unprecedented demand ignited by economic growth, unemployment among Saudis continues to increase.

“What complicates the problem is the absence of a law setting a minimum wage for workers…this is encouraging private sector establishments to give priority to expatriate workers as they are paid much less,” said a Ministry of Labor official.

“Most of the Saudis who lost their jobs last year were males, accounting for nearly 97.7 per cent or an estimated 144,500 men,” said Abdul Hameed Al Umari, a member of the Saudi Economic Association (S.E.A.).

Critics say that employers in the private sector are to blame for the failure of the Saudization Program. Immigrants, who will work for less, have inundated the market with cheap labor. Private businesses are not hiring Saudis as mandated by royal degree—but this doesn’t explain how almost 98 per cent of the Saudi men lost their jobs as reported above by the SEA.

If they “lost their jobs”, wouldn’t that mean, at one point, they were hired in the first place?

“It is not the scarcity of jobs that is the biggest problem,” says Mr. Mohammad Al-Ohali, Deputy Minister of Educational Affairs. “It’s a very complex problem related to people’s habits, to people’s culture.”

As an educator working for nearly five years in the Gulf, I have to agree with the Duty Minister of Education’s enlightened assessment on why Saudi Education isn’t working; which on the surface, seems to correspond with the reason why some private employers are unable to retain Saudis. Though the Ministry of Labor has talked about a more detailed plan to regulate the private employer’s role in the failure of Saudization, it may be that forcing businesses to employ Saudis may discourage them from expanding their operations; thereby slowing overall Saudi economic growth.

After interviewing public and private employers (especially those that are striving to emulate a global workplace), I found that Saudis have a reputation of not being acclimated to a western style workplace. They are not good team players and are not intrinsically motivated to do a good job.

How can labor regulations solve what apparently is a culture problem?

According to current Education theories in the west, when culture effects Education, the problem is Education. Maybe in the case of Saudi Arabia, it has to do with how Education is defined.

Training is Not Education

Gulf Arabs have been for centuries the merchants of the crossroads of the east and the west. Any professional Educator who has worked in the Saudi System on any level has seen what many Saudis apparently can’t—that their concept of what Education really is has been eschewed by an engrained cultural priority of maximizing commerce.

Saudis appear to see Education as a ‘training’ which purpose is to acquire skills to perform a task. It also views this training as a way to develop its infrastructure and enter the global market. The government therefore believes this requires students to specialize in the sciences and highly technical skills training.

At the same time, there is a belief that this emphasis on the sciences will promote critical and analytic thinking, attributes the former Educational establishment rote learning approach did not promote. This approach, in a perfect world, would maximize commerce, but will it really create the bustling, myriad of thriving metropolitan government in the Gulf countries like Saudi Arabia hope it will?

Though this thinking seems sound on the surface, it fails to address the lack of proper motivation among Saudi students. Saudi students, though quite capable of handling the academics, are debilitated by a general belief that the only sense to Education is to gain skills for the acquisition of wealth and prestige.

If your motive to take a job is for money and benefits and not for some deep seeded intrinsic interest to perform the task to benefit people or/and the society, the immediate requirements and effect (or consequences of poor performance) of the job will have secondary importance to you.

This is why training is not considered the same as Education.

Technical skills and advance scientific training have never been the pathways to critical and analytical thinking. Though the Saudi government laments that many students choose to study the humanities rather than sciences, humanities (i.e.: arts, history, philosophy and social studies …etc—that is, liberal arts), these are the traditional foundation in which critical and analytical thinking skills are acquired.

What is most apparent to many western Educators that come to work in the Gulf is that  Educational institutions are designed and ran to make profit rather than help young men and women explore and develop their options in life and the global community.

Since the majority of Saudis are not informed consumers in regard to Education, rote learning disguised with enormous new buildings, computers, smart boards and high tech gadgets as the ‘modern way’ seems to be the product most often pushed by international schools and universities.

This is not a problem particular to Saudi Arabia, but endemic to most Gulf countries.

The Need to Redefine Education for Reform to Work

Saudis are attempting to emulate western schools without understanding the political and historical circumstances in which they evolved or what the science; the art of Education is. They look at the reputation of American and British schools without understanding the dynamics of the public and private systems in their respective countries. If crown and private school owners are using the U.S. schools as a model, they should realize the reputation of the American system is based on their glory days, not the current state of affairs.

In fact, it has been the consensus among American Education scholars that the government supported public school system in the U.S. is on the verge of imminent collapse. To bear this out, somewhere between 40 to 50% of the adult population of America are ‘functionally illiterate’, meaning, they may be able to write their own names and a legible sentence or two [which defines ‘literate’ in the CIA World Book] but can’t fill out an application, understand a basic employment contract, read a news paper or understand a note from the teacher of their children). This dismal condition of public Education in the U.S. (and other modern western countries as well) came with a shift from Education to skills training.

The Historical and Political Context of the Skills Based Economy in the U.S.

Most developing countries see the U.S. as a model for economic prosperity for its people because they see America as a land of opportunity and long standing accomplishment. Indeed, this American did exist for a very short time at the zenith of its world leadership under the Eisenhower, Kennedy and Johnson administration.

The nation built the first computer; put the first man in space and on the moon, and amazed the world with its ingenuity and invention. Though these years were characterized by social and political unrest (necessary in democracies I think) the US was at the forefront of the ‘space age’, leading the world as a nation of high ideas and achievements to back it up. But, like the light of the stars in the evening sky, these accomplishments were some of the last fruits of a previous time and way of seeing the world.

The U.S. has taken an increasingly deregulated approach to capitalism – led by changes to its financial services sector. Government, charged with protecting the interest of the people have weighted policy in favor of big business. Under the mantra of ‘keeping the government out of people’s lives’, privatizations of public institutions became the rallying cry to reduce public monies previously spent on the public good.

Money meant for public services and such concerns like education, hospitals and the poor which were being supplemented by the federal government as a service for the well being and security of American people, are being capped and retrofitted to work like  businesses and expected to produce some type of financial return. While corporations were given subsidies from tax dollars for estimated profits lost (not achieved), social institutions such as schools and hospitals, (which had formally been services funded or heavily subsidized by the government to maintain the quality of life and promote public health) have been forced to do with less under a business model designed to increase more revenue from the public.

Corporate America had changed the business of the country from spreading the ‘the rule of the people for the people’ to the rule of private enterprise. The business of America is now all business and all its actions, foreign or domestic, suborn this purpose.

Instead of thinkers and visionaries to inspire the accomplishment of a great society, people now keep the machine of economics prosperity exponentially growing. The notion America became great because its purposes were a fusion of ideas that supported the notion that a society that serves its public benefits the world. That notion has been replaced by “trickle down economics.”

I don’t think the Kingdom wants to take this route.

Although liberal arts studies are still offered as a course of study in most places (which gave students a well rounded Education and the tools for critical thinking) gifted students are now urged to study the sciences while others are offered technical skill training.

Why this is Wrong for Saudi Arabia

Focusing on economics temporarily may be good for profits, but societies based on ‘the bottom line’ as an idea for living are seldom peaceful, ingenious or humane to its constituency. The people of Tunisia, Egypt, and several other countries in the Arab world can currently bear witness to this.

If Saudi Arabia is trying to build a great society comparative to the U.S. in its ‘hey-day,’ at this point in its history, it needs to adopt a more visionary or holistic view of social development.

America became great because it invested in its people by building a national library system; public Education that offered everyone a chance to achieve what his abilities would take him and a vision that crosses class, religion and ethnic lines. This was something that didn’t happen overnight, but evolved in natural progression with its people. Most of the development of the U.S. society (and most countries in the modern world) grew organically out of the necessity of its expanding population and technological needs. From these roots, the U.S. was able (intentionally or not) to bring about the expertise and skill labor necessary to support its social and industrial infrastructure.

Since Saudi Arabia has truncated this type of social-economic progression into the global world because of the suddenness of its oil wealth, it must take a different and more calculated direction to become a world leader.

Saudi Arabia doesn’t need more scientists and technocrats, but a real definition of what education is and a generation of home grown scholars; of educators to build its vision.  Before any of this can happen, what is required is

By building its industrial infrastructure without consciously focusing on its brain trust (castes of financiers, educators, scientists, politicians, historians and the like) and confusing the welfare of its society with business interest, Saudis will never be able to build an industrial society that will be capable of manufacturing its own military and industrial equipment as the U.S. (or Iran), or even properly educate its own citizens to compete in a global market.

A nation cannot truly be great until it can educate its own people.

One Response to Rethinking Education To Build Real Saudi Prosperity