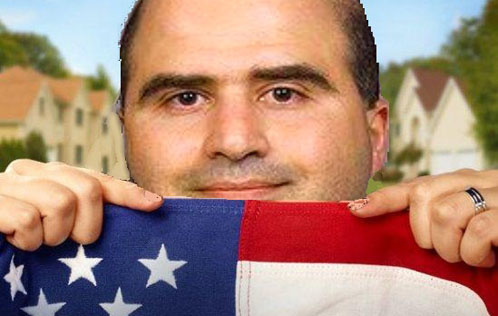 A column in Arab News talks about a reality TV show currently being broadcast in the US, All-American Muslim. The program, the writer says, is a step ahead for American Muslims in that it exposes the fact that the American Muslim society is diverse, but it also serves to perpetrate several stereotypes. The writer criticizes that the show’s focus is on Arab Muslims, though they comprise only one-third of all American Muslims. She’s not sure that focusing on the Shi’ite community of Dearborn, a minority even there, is representative.

She is pleased, however, that the show does demonstrate the diversity even within that community.

To tell the truth, I was unaware of this program’s existence; my viewing of reality TV shows is very limited. I’ll make a point of looking in on it, though.

The Learning Channel (TLC) recently aired the new reality television program, “All-American Muslim”, amid a great deal of buzz both within and outside the Muslim American community

Set in Dearborn, Michigan, a city that is well known for its large Muslim and Arab populations, the series focuses on American-born Muslims and aims to answer the question: “What is it like to be Muslim in America?”

America’s Muslim population is diverse in ethnicity, class and religious expression. Attending a Friday prayer or better yet, an Eid celebration showcases this diversity at its best – Turkish Americans next to Bosnian Americans, next to Bangladeshi, Malaysian, Indonesian, Indian, Pakistani, Palestinian and African Americans – the list goes on. There are those who attend mosque regularly and others who show up to socialize during the holidays. While TLC does not claim to represent all Muslim Americans, by focusing only on Shiite Muslims of Lebanese descent living in Detroit, and with a title that claims to speak on behalf of the “All-American Muslim”, the series certainly raises the question of whether it represents the experience of Muslim Americans in general.

The choice of those Americans featured in the show reflects a desire by the producers to represent many of the issues that Muslim Americans face, such as navigating family and religious pressures when it comes to interfaith marriage, or the pros and cons of wearing the hijab (head scarf). TLC did an excellent job of portraying equal numbers of Muslim women who wear head scarves and those who don’t – a distinction that the average American may be oblivious to. However, their choice to use Arabs for the cast has frustrated many Muslim Americans because it perpetuates the misconception that Arab is synonymous with Muslim. Many Americans may continue to miss the point that there are considerable Arab Christian and Jewish populations on the one hand, and that in fact only about a third of Muslim Americans are Arab, on the other.
…