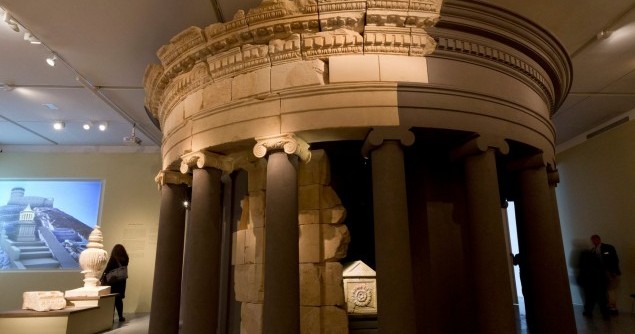 More than four years in the making, the largest exhibition ever staged by Israel’s national museum, dedicated to the life of King Herod, has generated unprecedented excitement both at home and abroad.

Entitled “Herod the Great: The King’s Final Journey”, the exhibition follows in the footsteps of Herod’s funeral cortege 2,000 years ago, when his body was carried from the royal winter palace near Jericho to his resting place on a man-made hill close to Bethlehem.

The exhibition was made possible by the discovery in 2007 of what is assumed to be Herod’s tomb at the hill fort of Herodium. An Israeli archeologist, Ehud Netzer, found the burial chamber after a search that began 35 years earlier.

More than 250 artefacts excavated from the two sites, weighing 30 tonnes in total and including three elaborately decorated limestone sarcophagi and a bath carved from a single slab of stone, have been brought to the Israel Museum in West Jerusalem for the nine-month show.

But the sites of Herod’s death and his entombment are both located in the occupied Palestinian territory of the West Bank, outside the recognised borders of Israel.

Palestinian Authority officials, backed by some Israeli archeologists, have complained that, in excavating the sites and transferring the artefacts out of the West Bank, Israel has violated international law.

Hamdan Taha, the PA official responsible for antiquities, denounced the exhibition, saying: “This is just the latest example of an Israeli policy to use archeology to cement its political claims to land that belongs to the Palestinian state. This is an assault on the Palestinians’ cultural heritage.”

The Herod exhibition has captured the imagination of many Israelis, despite the king’s Biblical reputation as a murderous villain and a lackey of the Roman empire. During his 33-year reign, which began in 37BC, Herod left a legacy of grandiose building projects, the ruins of which are today major tourist attractions.

Two have been particularly influential on Israel’s national narrative: the Masada fortress complex, next to the Dead Sea, later became the reputed site of a famous last stand by Jewish rebels against the Roman empire; and part of Herod’s massive expansion of the Second Temple in the Old City of Jerusalem survives in the form of the Western Wall, Judaism’s holiest site.

Israeli claims to control the site of the Haram al-Sharif, a compound of mosques including al-Aqsa that is next to the Western Wall, derive from a common belief among Israelis that the mosques were built over the ruins of the Second Temple.

The question of sovereignty of the Haram became one of the sticking points that led to the collapse of the Camp David talks between Israel and the Palestinians in 2000 and later triggered the Second Intifada.

Yonathan Mizrachi, a former archeologist with Israel’s Antiquities Authority, said Herod remained a controversial figure among Jews, both because of his mixed parentage – his mother was Arab, while his father was a Jewish convert – and because he was seen as being responsible for killing many Jews.

But, Mizrachi added, in recent years Jewish settlers had come to enthusiastically “adopt” Herod, in large part because his kingdom was located in Judea, today a substantial part of the West Bank that the settlers hope to wrest from the Palestinians.

Mizrachi said: “For the settlers, Herod and his archeological legacies, such as Herodium, provide a legitimacy to their presence in Palestinian areas. They bring Israeli and foreign tourists into the occupied territories and make the settlements feel more like they are part of Israel. Herod is now seen as a blessing to their cause.”

Israel has declared Herodium a national archeological park, one of many such historical and touristic sites it runs in the West Bank and East Jerusalem. The site has been excavated by Israeli archeologists from Jerusalem’s Hebrew University since 1972, five years after Israel occupied the West Bank following the 1967 war.

The park is a short distance from several Palestinian villages and a Jewish settlement called Tekoa, part of a settlement bloc known as Gush Etzion that Israel says it expects to keep in a peace agreement. An Israeli military base is also located next to Herodium.

PA officials have compared the Herod exhibition to the historical plunder of archeological treasures by former colonial powers.

In one of the most notorious cases, Britain shipped a section of the Parthenon, known as the Elgin Marbles, from Athens to the British Museum in London in the 19th century. Greece has been lobbying unsuccessfully for the return of the Marbles for decades.

Nonetheless, the Israel Museum has sought to downplay concerns about the use of the antiquities.

James Snyder, the museum’s director, told the Guardian newspaper: “We have this material on loan, and it will be returned to the site after the exhibition. Everything is here on an authorised basis. If we had left [the artefacts] as they were, there was no way of understanding or interpreting them.”

Both the archeological sites at Herodium and Jericho are regulated by the Civil Administration, a body of military officials who oversee Israel’s occupation of the Palestinian territories.

Israel has justified its control of the sites on the grounds that they are located in Area C, the nearly two-thirds of the West Bank over which Israel was given control by the Oslo Accords until a peace deal with the Palestinians was agreed. East Jerusalem, meanwhile, has been annexed by Israel in violation of international law.

Taha said, however, that the Oslo Accords were a temporary arrangement meant to last only five years and did not provide Israel the right to ship the artefacts into Israel without approval from the PA.

The PA joined the United Nations science and cultural body UNESCO last year. Taha said his department was preparing to seek World Heritage status for several archeological sites in Area C, including Herodium, as a way to “protect them from further Israeli misuse”.

Mizrachi, who helped found Emek Shaveh, an Israeli organisation dedicated to challenging the abuse of archaeology in the Israeli-Palestinian conflict, said that according to the 1954 Hague Convention, Israel had no right to carry out digs in an area it was belligerently occupying, such as the West Bank, unless it was an emergency excavation to preserve artefacts in danger of destruction.

“Israel wants to present the situation as if it is simply ‘borrowing’ these antiquities from the Palestinians, like it might borrow an exhibit from France or Britain. But that is not the reality in this case. It is borrowing them from the Civil Administration, which has no right to them in the first place.”

Palestinians have also complained that Israel’s continuing stranglehold on archeological sites in the West Bank and East Jerusalem has undermined the Palestinian economy.

Many of the region’s most important touristic sites are under Israeli control in the occupied territories, including Jerusalem’s Old City, Jesus’ presumed baptism site on the River Jordan, the shoreline of much of the Dead Sea, and Sebastiya, a regional capital destroyed and rebuilt by successive empires.

Maha Sansur, a Palestinian archeologist who has worked on developing tourism in the West Bank, said: “The Palestinian economy is very dependent on tourism and archeological sites are the key to attracting tourists in large numbers.

“At the moment the Palestinians have just islands of control in parts of the West Bank and that makes it impossible to establish a functioning tourism industry.”

Huda al-Imam, director of the Jerusalem Studies Centre, a campus of al-Quds University close to the al-Aqsa mosque, said the fight to control and preserve the heritage of Palestinian areas was under constant attack by Israel.

“Here on the campus we have a wonderful Mamluk bathhouse, dated to 1308, that we have been trying to restore since 2009. But the Israeli archeologists and police have come repeatedly to stop us working on the site and we have been fined.

“They have even tried to claim that the site is a mikveh [a Jewish ritual bath]. Israel wants to control every part of the narrative, to erase our heritage and silence our voices. It denies us any claim to a past.”