For the Love of Biryani: Judging the Region’s Favourite Dish 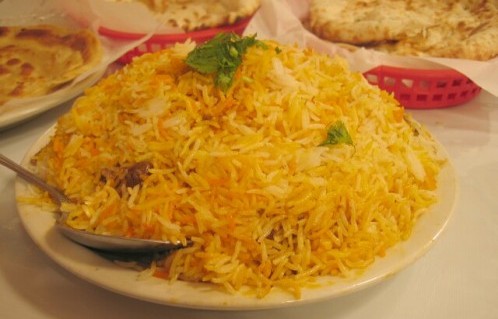 What is it? I know it’s more than just curry and rice. And it’s not pilau – that’s lighter, I think. And is it the same as Pilaf? Or isn’t it? I wikipedia-ed it, and it says it is spiced meat or vegetables and plain rice cooked separately, then brought together and layered. This differentiates it from pilau, which is more of a one-pot-wonder.

But then again, there are hundreds of styles of biryani, many of which seem to break the rules outlined above. It originated in Persia, and then spread along the spice route, and it appears that every nation from Iraq to Malaysia has it’s version. Come to think of it, there are dishes like Ouzi from more western areas like Palestine and here in the UAE that could almost be termed biryani.

This is the 6th competition the Arabian Courtyard Hotel has held here, and yet the first I have heard of. It came to me through our tabletalk.me Facebook page, asking for competitors. Unfortunately it coincided with bakefestdxb and the remaining tabletalkers, including myself, considered ourselves unworthy. I had only cooked biryani twice in the past; once was a complete burnt disaster that resulted in a quick run to the local curry take-out, depositing the biryani pot in the bin on the way. The second result was what I like to term ‘meh‘ – completely uninspiring. So I laughingly offered to judge. After all, I am a very experienced diner. Who would have thought they would take me up on the offer?

The Biryanis we are looking at today are predominantly Lucknow or Hyderabad style Pakki Biryani. This means that the rice is cooked by absorption method, simply seasoned with little more than salt, saffron and possibly cardamom. The meat, fish, or vegetables will be cooked separately in a richly flavoured sauce. The other spices we will expect to find are mace, turmeric, cumin, pepper, cloves, coriander, possibly garam masala, or a fragrant curry spice mix, bay leaves, garlic and ginger. They will be brought together only in the final moments – an arranged wedding that we know is going to work.

When I arrive at 11am, the first group of ladies have started. From 75 submitted recipes from applicants, they have selected 10 to compete today (Interestingly, all Asian, mainly Indian in origin, and all female). There are 5 women sharing the Mumtaz Mahal kitchen, and in what is probably an unpleasant turn-around, Chef Glen is taking orders from them rather than governing his own kitchen. It has been commandeered for the day – a welcome change or a thorn in his side…. who can tell? He fetches fried onions, nuts and lettuce at their command, procures pots and covers for their pleasure and then stands in the corner appearing intermittently worried and supremely chefly.

I am joined soon by Rakesh Puri, whose credentials you can find by clicking on the link. He’s been judging this event since it began six years ago, and he has the ladies giggling and offering smiles and flattery as bribes in seconds flat. When he enters the kitchen, he is given a Toque Blanche, and I grumble to a poor little waiter who had earlier given me a particularly unattractive hair net. He bows obsequiously and returns moments later with a chef’s hat, but by then I am embarrassed by my behaviour and decline.

The first group are pushed out at 12 noon, and the new 5 ladies quickly assume their positions (two due to swelter in their abaya and hijab) while Rakesh, Chef and I peruse the first offering. Dish #1 is deconstructed. The other ladies are shocked to see potato duckies sitting on vermicelli nests, and a vase of carrot flowers. The meatballs are coated in silver leaf, and guardedly, they ask if they also were expected to present as such. They are horrified, worried and jealous. No, says Rakesh – they will be judged predominantly on the taste – the items of presentation must have some bearing on the flavour of the dish or they will be ignored. Four women smile contentedly and nod among each other, and distance themselves from the food-stylist.

The other four dishes are more simply presented, but far from unattractive. The rice is always deeply coloured with the saffron, and often there is a pleasant mixing of both yellow and white grains. The prawn biryani at the end wins my vote for presentation – six crispy red tiger prawn heads appear to launch themselves over a golden wave. It also wins me on taste – the prawns are cooked two ways – either curled up into springy little spirals, or thickly sliced slabs of sweet and tender flesh. The spices in this one are simple, and don’t overwhelm the delicate seafood. The mutton biryanis vary tremendously – one sweet, complex and nutty, the other richer and saltier. The vegetarian is covered in fruits – pomegranate, grapes, pineapple, and although the rice is beautifully flavoured, overall it’s a little too fruity for me.

The first ladies gossip in seats in the other half of the restaurant that look like rickshaws – it gives me the impression they are riding off to lunch and having a good old natter on the way. Families join them. A sitar player treats our ears. A little girl falls asleep on a beaded cushion at his side. Rakesh whips out a sheath of paper and works on some healthy recipes, and I wish I had brought something to make myself look busier. I begin a particularly furious game of online scrabble with a fiend called 1Maynemayne, and convince myself that he is cheating – “weasons” is a word, he says. I’ll give him a weason to keep clear of me if he ever comes near one of my games again – that wascally wabbit!

Round two finally nears completion, but the steaming copper bowls arrive at such large intervals that I find myself salivating. I point out that it would be unfair to judge some cold, and luckily the others agree. The vegetarian this time is a wet style in a rich coconut gravy – southern, I am told. Two chicken ones are as different as the two mutton ones were earlier – one is Kachchi Gosht ki biryani, and has been cooked differently – the marinated meat is placed in the bottom of the pot raw, with the rice on top, and then the pot is sealed with dough to stop any moisture leaking. I really enjoy this – the chicken is more tender, and the spices more integrated. I also love the stuffed marinated eggplants she has served along-side rather than the more traditional raita. Rakesh tells me this is forbidden, but I ignore him and mark it well anyway.

The stand-out is the fish-stick biryani, which I admit, sounds terrible. It is in fact tender little parcels of crispy crumbed hamour and coriander, mixed with a very fragrant rice – more herbacious than the others, which have spices that are just as piquant, but have tended towards the sweetly pungent end of the spectrum.

We have been given judging forms, and I dutifully fill the entire thing out, giving marks out of 10 for hygiene, timeliness, presentation, colour and texture, and a mark out of 50 for taste. At completion I look at Rakesh and Chef’s forms, and they have only three pencil-marks as compared to my 60. First, second and third. I total all mine, therefore adding another 10 scratches to the table, and surprisingly come up with pretty much the same choices as them. I concede my third choice (the chicken Kachchi Gosht) and agree with Rakesh’s choice of the prawns. The more complex of the two earlier mutton dishes takes second place.

The ladies gather for photographs, and the crowd swoop on the remaining biryani. A presenter from Hum FM circles the table and gives an account in Hinglish so fast it flows out of her mouth like musical popcorn. My second look-in at the fish-sticks was fruitless, but luckily everyone else left the eggplants just for me. The prizes were glittery sandals and vouchers for the other restaurants at the Arabian Courtyard. And just as I am dawning on the fact that I and the Food and Beverage manager are the only western people in the jam-packed room, I am called up to accept a thank-you gift and speak.

It’s one of those time-stands-still moments. In a room of strangers, having judged something you know little about – an outsider, an intruder. But then I gaze around the room, and see all these happy faces with full smiles plumped with spice, and feel surprisingly quite at home. I confess my burning episode with my first attempt at Biryani, and vow to give it another go – inspired as I am with all their work and my love of the dish itself.