“Expansion of the Status Quo”: Last Year in Jordan 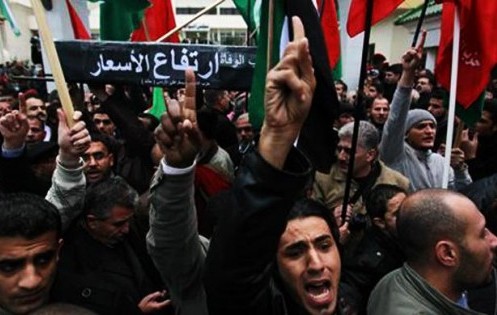 As the year draws to a close, I’ve been forcing myself these past few days to reflect on the events of the last 12 months. It’s extremely difficult to put everything in to words, or even in to context, and I wouldn’t even know where to begin. As I write this, I struggle to be conscious of my mood. See, one of the biggest critiques thrown around these days is that people are “too negative”, as if emotions have suddenly become the foundations of public discourse.

It is of course an incredibly silly charge, and stems mostly from a populace that is not accustomed to seeing critique as a tool of progress but rather as a weapon bent on destruction, upheaval and even disloyalty. This has forced upon us an environment where not only does your fellow citizen disagree with what you say, but they do not respect your right to say it, or even you for that matter. Regardless, of the ailing conversational atmosphere, the charge of “being negative” does force one to think about the light at the end of the tunnel. In this bipolar social discourse, where people divide each other in to optimist and pessimist, negative and positive, black and white, with us or against us, loyal or disloyal, this or that – I’ve tried my best to straddle the middle ground; allowing realism to triumph above all else. It is perhaps the one major lesson I can personally derive from the Hashemite leadership over the past half century or so.

In that sense, realistically speaking, 2011 in Jordan has been akin to running wildly through a maze only to find yourself back at the start again with that eerie sense of having spend the past year running in an endless circle. If I were to describe it emotionally, that would be exactly it. That’s the feeling. The realist in me looks at these 12 months as more of the same. From the public missteps to the political theater, it is incredibly difficult to identify something one could consider to be a major step towards progress on the political front. Looking back, I think some of the biggest highlights of the year have been largely driven by the people and non-state actors. Whether it is innovation, entrepreneurship, civil empowerment, or media, much of the advancement on these fronts has been driven from the bottom-up, and fortunately, there have been quite a few. But my focus is naturally on the public sphere rather than the private.

And in the public sphere, there is much to say.

A non-representative parliament that was voted in by a flawed election law – a law that the King himself has said requires reform – this parliament continues to speak in the name of the people. It is this same parliament that has spent much of the past year squabbling with itself and with two different government it has given a vote of confidence to. It is this same parliament that gets to amend reform-minded laws and the constitution – both processes which continue to take place behind closed doors. We’ve had two governments, the former of which spent a great deal of time trying to deal with a 2007 corruption case, the apparent smuggling of a convicted corrupt tycoon, while attempting to pursue other corruption cases.

In fact, corruption seems to be the most discernible flavor of the year, and is a word seen on the majority of placards posters have held up since January 2011. Media blackouts on these cases have meant that assumptions are made by the public, many of them wrong, but moreover, it has meant that decisions and process have remained behind closed door, far from public consumption. Even the discourse that emerged from the most memorable “reform efforts” of 2011 were, at best controversial, and at worst, a waste of time. From whether public officials can carry dual citizenship, to fines imposed on media for corruption reporting, GCC membership (or lack thereof), etc.

All in all, we’ve seen an expansion of the status quo really, mostly in an effort to stabilize and maintain it. The biggest moves that paint a picture of something progressive have originated from statements issued by the King. But unless you’re someone who believes that this country’s problems can only be solved by the King’s magic verbal wand, then speeches don’t seem to be a good indicator of reform or progress.

On the street, people are scattered. Protesters continued to be dispersed, with scattered messages. The only purpose protesters have really served is to inadvertently act as pressure groups. I think by now everyone has a clear understanding of the fact that was quite evident nearly a year ago: toppling a government is fairly easy, but asking for reform is a whole other ball game. It requires organizing and a sense of consensus that is fairly limited in a country like Jordan where a public conversation has never really been part of the country’s discourse. Reform has always been (and continues to be) something that is perceived to be strictly in the hands of the state, and more specifically, in the hands of the King. Both loyalists of the status quo and those calling for reform – two groups at odds with each other – tend to see it this way. Unfortunately, they are largely correct in their perception. In a country where royal patronage and dependency thrives and dominates every institution – the environment that emerges is one where reform is seen as the King’s domain, because the King is the only one who can really deliver.

So, where are we? We’ve lost opportunities, time, and effort this past year. But what have we gained? As a people? As a country? Where is the light at the end of that tunnel? Where does the glimmer of hope lie? What has the Arab awakening really given us?

In my opinion, there has been one interesting gain from this time of upheaval, and that is greater freedom of speech and expresson.

Traditionally, during times of unusual regional duress, when events all around us make it very difficult for the country’s security apparatus to clamp down on domestic frustrations, we tend to experience a moment of relief. It is very much like a pressure cooker when the steam is let out momentarily; when it reaches a certain limit. Protests are permitted, people become more vocal, and even the media becomes bolder. But then the regional unrest dies down, and things go back to normal. It is a brief window of opportunity to vent out, and most people engage in it for exactly that purpose.

But this time, the window seems to have remained open. The Arab Awakening has made it a reality. And in doing so, the red lines are not only briefly crossed, but are being shifted, if not entirely broken in some cases. But more importantly, in the midst of this act, the culture of fear is slowly eroding. There continue to be backlashes, both political, security-related, and more prominently, social – but the erosion is happening. There are things being talked about today that could not imagine would have been discussed or publicly debated a year ago or more.

So what does this mean for Jordan?

The optimist in me, hopes it will translate to the establishment of new movements, new alternatives, new voices, new mobilizations, and hopefully, an era of community organizing. Some of this was already happening in small doses, if not entirely “underground”, long before January 2011, but this past year has given many the willpower to come out, to move, and to organize. Frank debates and discussions are happening in a manner that was all but non-existant only a year ago. If a year ago we were complaining that the online world is a bubble of political debate we wish could be seen offline, then that much has been accomplished these past few months, and for once the real world and the virtual world are looking a lot more like each other. This is a tremendous achievement when it comes to social and political progress, and is ironically the one achievement that the state cannot take much credit for other than having the good sense from not reacting in an outrageously violent manner.

How will this translate to tangible changes taking place today?

It won’t. At least not right now. But it is an important first step that has been missing from Jordan. My hopes is that it will yield better and stronger political parties, independent youth organizations that are alternative models to their co-opted brethren, a new legacy of activism, better media, and better discussions. My hopes is that it will end up breaking that culture of fear, and perhaps even force the security apparatus to retire its tradition of public interventions.

Right now it feels the country is still scattered, and those who disagree with each other are still doing what they’ve been brought up to do – that is, tearing each other apart for holding an opposing view. Movements still don’t know what they’re doing and are stuck in reacting instead of acting. But my hopes is that this window of opportunity will remain forcibly open, or at least long enough for the country to evolve past this distorted point and onto a plateau that is more common ground. It is a reform that is quietly happening bottom up, rather than top down, and it will hopefully set the groundwork for what’s to come, and what direction this country will eventually go.

Getting people to discuss, debate or even care about local political issues only a year ago was akin to pulling teeth. This year that public discourse has changed. It is messy, it is chaotic, and at times, acrimonious. But it is happening. And that’s important. That’s a prerequisite.

Looking back at 2011, and looking back at the arab awakening as the context and backdrop for much of what has happened domestically, this is the most I can glean from the status quo.