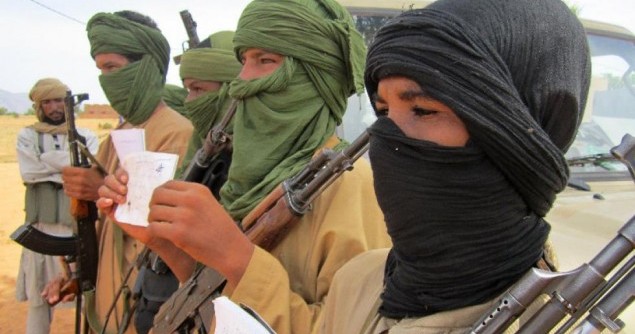 While tempted I will refrain from discussing the complexity of the Mali conflict; or speak on the defunct and anemic government of Mali whose human rights record is dismal at best; and the “long-term neglect and discrimination” of Mali’s consecutive governments of the secularist Tuaregs in the north of Mali. I will not even discuss how our narrow ill-founded objectives prompted us to train, fund, recruit these same radical Islamists wreaking havoc in Mali; or mention the millions we spent to print their propaganda manuals. I will not even lament that our zealot guard of despotic rulers and our interest in protecting them from organic secular nationalists created the political void where these radical Islamists are seen by Malians as the only viable option able to deliver an end to Mali’s corrupt government and its brutal military. Instead I will focus on the use of the term “child soldiers” in reference to the young children the Islamists of Mali are recruiting and paying to wage war against the Malian government.

Naturally, we all agree that the recruitment and deployment of child soldiers is inhumane and cowardly. We fully understand the implications of such an experience on the mental and physical well- being of these vulnerable young children. But we fail to recognize that the use of child soldiers is widespread and is not limited to Africa.

My husband is a former U.S Marine. Since the Iraq invasion I have witnessed and heard him and his friends agonize over the cost of wars on the lives and well-being of American military men and women deployed in Iraq and Afghanistan. So I am horrified that Mali’s militant groups are recruiting child soldiers; but I am equally disturbed that the military is recruiting underage children at my neighborhood school. I am also concerned by the wide spread use of online recruitment sites fishing for our young; whether by Muslim militants who feed on the current hateful Islamophobic trend in the US; or by Israel’s online recruitment programs that promise an exciting tour of duty in combat zones.

I also cannot help notice how the language we use to describe the recruitment and deployment of young children takes a different meaning depending on the group or country involved. With little reflection we frame the recruitment of young children to serve in armed military groups differently depending on the recruiters’ nationality, religion and region. With each label we assume appropriate, we reveal our inherent ethnic, religious and cultural biases.

Conveniently we overlook to note that regardless of these young peoples’ background, gender, ethnicity or religion they are all underage minors intentionally recruited to become soldiers of war. All are developmentally vulnerable who are preyed upon during a time in their life where they exhibit relative robust health but their brain development is not yet complete– they are impulsive, gullible and are at high risk of irrational decisions. And all are equally helpless to ideological brain washing and are susceptible to slick manipulating adults and online recruiting tactics.

The US military is deliberately targeting children on line, at local fairs and public events. US recruiters’ use sophisticated marketing strategies to influence and gain access to our young. Since the passage of No Child Left Behind in 2001 the recruitment of underage Americans has become routine. “In every public high school across the country….. recruiters from all branches of the military work to enlist children, aged14 through18 years, for assignments ranging from pushing paper to bombing Afghan villages. According to the Optional Protocol to the Convention on the Rights of the Child report the US military deployed soldiers as young as 17 in the Gulf War, and the Bosnia Herzegovina and Somalia conflict. Thankfully in the US, military recruiters still maintain humane deference to our elementary aged children, but that is not the case in other countries.

Also Israel’s military and its US based affiliates actively recruit young American adolescents to join the IDF promising them adventure and combat duty with little scrutiny, monitoring or objection from any group or entity. Most vulnerable are those young Americans who fall prey to sophisticated online sites employed by fanatical Islamist militants. These young children are daily bombarded with ill depictions of their faith and community by the many Islamophobics who spew hate in every public medium; and are without access to programs at their local school or community to help them make sense of these unseemly attacks or offer them comfort and support. Unfortunately some fall victim to savvy on line campaigns run by manipulating fanatical Militant Islamists’ who conveniently use America’s hateful discourse and wars to feed on their own brand of hate.

The US military recruitment of our teenage children is institutionalized and we have come to tolerate and accept its slick marketing campaigns and practices. We are also oblivious to the many military schools that are publicly funded across every state to help enlist young future soldiers. We are comfortable knowing that Israel’s military recruiters targets young American children to join the ranks of the Israeli Defense Forces (IDF). We ignore that our young once deployed in Israel will more than likely take part in active combat; engage in one of the worlds most notorious and longest occupation; and will more likely take part in Israel’s conflicts and wars. Yet we strongly abhor the recruitment of teenage soldiers by militants whom we consider an obstacle to our national interest and call these adolescents child soldiers. We are also dismissive of the reasons that open our young children to fanatical Muslim groups and brand them terrorists.

But what is the difference between the young underage American cadet, the young American targeted and recruited by the IDF, the African child soldier and the young American Muslim who falls prey to fanatical militants. Not much, but our own innate biases. “The internationally agreed definition for a child associated with an armed force or armed group (child soldier) is any person below 18 years of age who is, or who has been, recruited or used by an armed force or armed group in any capacity.”

Young children who join formal military programs, or informal opposition and militant groups are bound by the same rules and activities. Their enlistment entails their absolute obedience, disengagement from friends and family, loss of innocence; and requires them to shed their natural gifts that are the hallmark of their youth. They are forced to differentiate the way they view and interact with people based on a set of over simplified generalized criteria- good people worth protecting vs. bad people to control or destroy. In addition considering their healthy disposition before recruitment, once conscripted these young people are exposed to physical and mental harm that damages their future development and prospects. “A study of mental disorders in the US military found the highest rates of all disorders, including alcohol abuse, anxiety syndromes, depression, and post -traumatic stress disorder, among the youngest cohort, those aged 17 through 24 years.”

Since 2007, the international community agrees that all children under the age of majority (18 and younger) recruited to serve a military objective are child soldiers. This term refers to states, non-states , national movements, and opposition and militant groups.  While the use of child soldiers by non state armed militants is widespread, in 2010 twenty governments were implicated in deploying children in combat zones and more than 40 countries recruited children under the age of 18 including our own. Interestingly when states deploy child soldiers in combat zones, armed opposition groups follow in step. This is the case in Afghanistan, Columbia, Ivory Coast, the Democratic Republic of Congo, Israel, Libya, Myanmar, Philippines, Thailand, Sudan, South Sudan, Syria and Yemen.

Labels such as cadet, child soldier or terrorist provide us the latitude to codify our perception of a practice that harms our children regardless of their creed and origin. Unaware that the words we exercise to describe these young children show variant levels of acceptance of the objective of the recruiter. Irrespective of the labels we assume each of these young children; or whether we believe their enlistment will serve a bigger cause or the interest of radicals Islamists; these young children are facing serious psychological, mental and physical harm. Prematurely they are exposed to danger and their development and well-being are hindered and arrested.

So here in the US we see no objection to the recruitment of teenage children. Meanwhile the choices we make to label the recruitment of one group of underage children clearly suggest that we intuitively realize the harm done to these young people, but for one reason or another we choose to sanction the practice of groups we favor and reject another. Our choice of labels exposes our innate preconceived notions and biases that allow us to gloss over the recruitment of our young and ignore our responsibility to protect them from harm. Furthermore our inability to recognize the many labels we assign these young is a serious obstacle to our efforts to genuinely address the rise in the number of children in war zones.

It is time for us to realize that the words we use to describe recruiting, training and deploying young children frame our opinion and resolve to end this horrific practice. Americans and others must insist on calling all under age children recruited and/or deployed in conflict zones by the same term- “child soldiers”. Otherwise we will continue to deny these young children their due legal protections . We have to come to terms with the fact that these young children are equally vulnerable no matter what region, religion or creed they happen to belong to. Above all we need to shed our biases that have limited our abilities and faithfulness to address and care for our own children and the children of every mother.