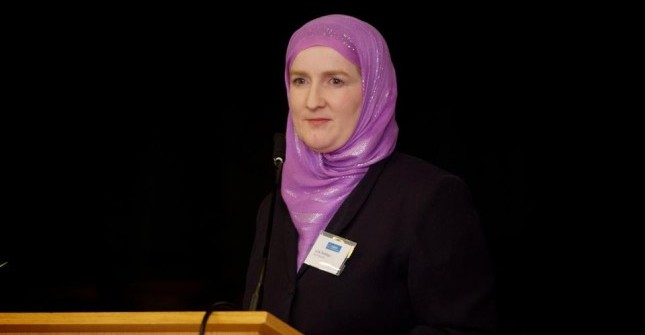 After Friday prayers, at the scene of the recent  dreadful murder of Drummer Lee Rigby, Julie Siddiqi laid a bunch of flowers. “It was hard not to cry, especially when the imam raised his hands in prayer at the moment we laid the flowers,” she said afterwards.

Siddiqi is executive director of the Islamic Society of Britain, one of the few women leading a national Muslim organisation and one of a growing number of Muslims of English origin. Her horror at the Woolwich attack is palpable: “It’s echoed by the Muslims around me. There’s genuine shock and outrage. The killing has really shaken people up.”

The community’s response was swift and unambiguous. Within hours of the incident, the Muslim Council of Britain issued a condemnation. “Whether it was to do with Muslims or not, it was right to express our horror at this disgusting event,” says Harun Khan, one of the MCB’s young leaders.

“But we were conscious, too, that the suspects had used Islamic words, and these would be used to demonise Muslims. We wanted people to know what happened was wrong, and there is nothing in Islam to justify it.”

The MCB is an umbrella body for 500 mosques, schools and associations, so getting an agreed public statement out rapidly was difficult. “We knew it had to be quick and unequivocal,” says Khan. The MCB’s message was across news outlets later on Wednesday afternoon.

Social media was used alongside conventional media channels. “Our Twitter account went into overdrive,” Khan says. “We were relentless in emphasising our condemnation, and amplified the voices of our affiliates doing the same. This was not just some leaders condemning the attack, it was the entire community.” Attempting to guide young Muslims using social media away from Twitter hate wars and towards constructive dialogue was another aim of the quick response.

Siddiqi added: “The community is maturing. The response was different to 7 July. In 2005, our organisations weren’t as developed. Now there’s more confidence, Muslims are more proactive.” She partly attributes this to the fact that as the length of the community’s presence in the UK increases, connections between Muslims and wider society have become stronger.

As always, there was criticism by Muslims of Muslim organisations for being “apologists” through the condemnations. If these were two lone men acting against Islamic principles, and if the rest of Muslims are as guilt-free as Britain’s general population, asked some, why the rush to apologise? Khan rejects this argument: “All decent people condemn such events. We do too. As members of this society, it is important we reach out and clearly express our position”

Siddiqi said she felt the need to reassure wider society and protect Muslims from a possible backlash: “We knew this incident would put people at risk, so it was a duty for us to respond.”

The backdrop to their stance is the sense of a growing anti-Muslim hatred, and rise of the English Defence League.

The backlash against Muslims after the September 11 and 7 July terrorist outrages were painful for Muslims. Since then there has been a steady increase in hate crime against Muslims, amid growing poverty and the rise of far-right parties across Europe. Last week a letter to the Muslim Association of Greece threatened to “slaughter like chickens” Muslims who did not leave the country by 30 June. Many feel that a comparison can be drawn with 1930s Europe.

“Fear is widespread among Muslims,” says Fiyaz Mughal, director of theTell Mama (Measuring anti-Muslim attacks) project. There has been a very large spike in abuse, attacks and assaults on Muslims since Woolwich. “We used to receive four to eight cases every day. Since Woolwich we’ve had 162, from hijab and niqab pulling, to graffiti on mosques and cars. One man entered a mosque armed with knives. Mosques have been attacked with petrol bombs.”

It is fashionable to deny that Islamophobia exists. “Evidentially,” says Mughal, “that idea is dead. We have data that shows clear targeting of Muslims.” He dismisses the idea that this arises from a sense of Muslim victimhood: “If people stop targeting Muslims then they won’t be victims. Simple.”

If anything, Muslims under-report attacks. “They don’t want to make a fuss. They shrug it off,” says Mughal. There are other reasons,. “People worry if they report attacks it will be their own details that get recorded. They’re fearful how their data will be used.”

One positive outcome of the tragedy is a stronger sense of community. Both Siddiqi and Khan feel that Muslim organisations have worked well together, establishing stronger relationships.

The notion of standing firm with British society is strong across the board. “All the community has so much pride in being British,” says Esmat Jeraj, assistant secretary general for the Council of European Jamaats (congregations).

The mosque next door to COEJ in Streatham, south London, was used for an open-house community meeting on Thursday to discuss Woolwich. “We invited all our neighbours, local organisations, Safer Neighbourhoods teams and councillors,” says Jeraj. She points out it was the only event of its kind in Streatham. “It was the imam’s idea to organise it.”

This open, cross-community role for Muslims is something Jeraj is keen to champion. “While we are practising Muslims, we have a responsibility as British citizens. Part of that work is countering lack of knowledge about Muslims and showing that mosques have nothing to hide, that they are open to all.

“Don’t worry. We’re not wishing for the government to be abolished or sharia to be imposed. We want people to know more about Muslims. We want to play our part.”

Humour in the face of adversity is a British trait. TV presenters faced with the Islamic phrase “Allahu akbar” (al-laa-hoo), struggled valiantly to pronounce it, but mostly only managed “aloo akbar”. What did potatoes (aloo) have to do with prayer, wondered some Muslims.

In terms of the media response to the death of Lee Rigby, aside from the ethics of publishing gory images, Muslims wondered if the event was politicised because of seeming connections to their religion. In a recent chilling murder allegedly inspired by anti-Muslim hatred, a 75-year-old Muslim man in Birmingham, returning from evening prayers, was stabbed to death outside his front door. It barely made the papers, let alone the front pages. Similar accusations of double standards were levelled at media and politicians for referring immediately to the Woolwich killing as an act of terrorism, before the facts of the terrible event had become known. .

During an early news report, the BBC’s Nick Robinson described the suspects as of “Muslim appearance”. He was criticised and subsequently apologised for using a phrase “liable to be misinterpreted and to cause offence”. The apology was well-received but left some Muslims wondering about the predisposition of media and politicians to equate any criminal act conducted by a Muslim with terrorism.

Baroness Warsi, the minister for faith and communities, criticised media outlets for giving space to “nutters and idiots” such as Anjem Choudary, former head of the banned extremist organisation Al-Muhajiroun.

One of the suspects, Michael Adebolajo, was filmed with Choudary, and many believe Choudary may have influenced the alleged killer.

Khan says the MCB has been working to tackle the extreme messages Choudary is peddling. Just two weeks ago, Choudhary’s supporters are alleged to have beaten up a Muslim man on Edgware Roadin London, in a horrific case of sectarian violence. A subsequent cross-sectarian forum co-organised by MCB posed searching questions for the police as to why this man was still at large.

Siddiqi, too, says that Muslims on the ground know of the threat that Choudary represents. “One local man at Woolwich mosque told me how Al-Muhajiroun tried to take over the mosque. They worked hard to push them out. But Al-Muhajiroun got a room from the council further up the road from which they conducted their activities.”

Many Muslims feel they are tackling extremism, but that those in positions of power are letting them down. Siddiqi feels it is important to recognise that media organisations have tried hard to engage Muslim voices. “I’ve been doing interviews non-stop,” she says.

“There’s a sense of unity and purpose,” says Khan. “But also a deep understanding that there’s more to do. There is always more to do.”