A Tale of Hunger, An Empty Fridge and A Rubber Duck 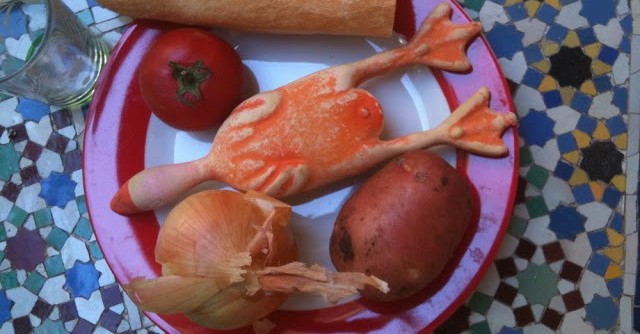 Okay, I admit it. I lost it today. Or, to be clinically accurate, I lost it last night and today. Not that I broke the fast, or anything like that, unless you count having vivid dreams about chocolate ice cream sundaes to be fast breaking. In reality what I lost was my sense of time and all of my food.

I had enjoyed a great evening with my slightly weird American friend Doug. We ate a heap of food, watched a movie and then ate some more. I staggered up to bed for a snooze about midnight. Doug said he would let himself out.

It was probably 1.30 in the morning and the canon went off.  My house is directly in the line of fire from the canon. In fact only the day before a friend visiting from Poland was so startled by the sound of the canon blast echoing around the Medina he actually asked where the cannonballs land. I pointed out that they don’t use cannonballs. He seemed somewhat relieved.

So, there I am, in bed, enjoying a dream about chocolate eclairs and whipped cream, when the cannon startles me awake. I close my eyes and promise myself just a few more minutes sleep when the drumming of the D’kak makes the idea impossible. Why is it he starts his drumming right outside my door? Is it intentional? Have I somehow offended him and he is taking revenge? And another thing. Shouldn’t he have moved on and woken up a few more people? He stays outside my door for the longest time.

Eventually I got up and staggered downstairs to the kitchen only to find that I have already drunk the last of the almond milk and that the preparations for my next batch are still soaking.

Blanched almonds that have been soaking for hours do not look inviting. I try one. It tastes like it looks – soggy.

Okay what about the avocado smoothie? Alas, the empty jug is in the sink waiting for me to wash it. And all the food I had ready for my big meal is gone. I realise it was a mistake leaving Doug in the house while there was still something left to eat.

Earlier in the evening, because Doug was visiting, I had turned down an invitation to have a hearty meal of trid with my neighbour. How can I have been so stupid?

Eggs? Thankfully I find that there is one remaining boiled egg. Suddenly I am feeling awake and happy. An egg is good. Nutritious and dipped in a little salt, it will be tasty. Gleefully I crack it open on the marble bench top. Which would have been fine if it had been hard boiled. I watch in dismay as the last remaining egg slides over the bench top and deposits itself on the kitchen floor. What I said next is unprintable.

However, the cat cleans up efficiently and then looks up at me, pleading for an encore. No way cat.

It is now 2.15 am. I walk out into the courtyard and feed the cat some dried biscuits. They look strangely appetising.

The aroma in the courtyard is like a cruel joke. I don’t know what it is about the smell of food in Fez, but in that moment the cool night air is wafting cooking smells from all the houses around me. Tagine. Kefta. Roast chicken. Trid… There should be a law to prevent such olfactory intrusions into my private space.

Almost 2.30 and I suddenly remember that I bought some cornflakes a couple of days earlier. Yay! Cornflakes! I hurry back to the kitchen, grab a bowl and open the packet. It is then I discover that I have purchased some kind of weird coco-flakes. Chocolate covered… not what I need, not what I want, and even with the remainder of a tub of yogurt, sickly sweet. The yogurt might be okay with honey, I decide. But then see the use-by date. Should have eaten it last Ramadan when it was fresh.

2.50 am. At this point I am not amused. Yesterday’s baguette is uneaten. It remains so. I have no idea who invented the baguette, but the thing I have always admired about them is that if you don’t eat the straight away they become very useful as baseball bats or truncheons.

At that point in the evenings proceedings I see the plate on the table. It is wrapped in is silver paper and beside it is piece of paper. The writing on the paper I recognise as that of my friend Doug. The single word he has written is “enjoy”.

I am salivating, wondering, starving. I rip open the aluminium foil. I am including a photograph at this point, otherwise there might be some doubt as to my sanity.

Needless to say, I was mightily amused – not!

To make matters worse, the bloody rubber chicken made a squeaking noise when I picked it up. It startled the cat, who ran from the room. I threw the chicken after it. It squeaked as it landed.

At the bottom of the plate is another note. It has two words: “Upstairs Fridge”.

I trudged up the stairs and discovered that Doug’s big joke has been to transfer all my food – smoothies, almond milk, hard boiled eggs, dates, fresh yogurt and a bar of New Zealand Hokey-pokey chocolate – to the top fridge. I look at my watch. It is 3.20 am. I have ten minutes to eat.

Revenge, as they say, is a dish best served cold. What they don’t say, but I know to be true, is in Doug’s case it will involve a rubber duck and, sure as hell, he won’t be eating it.