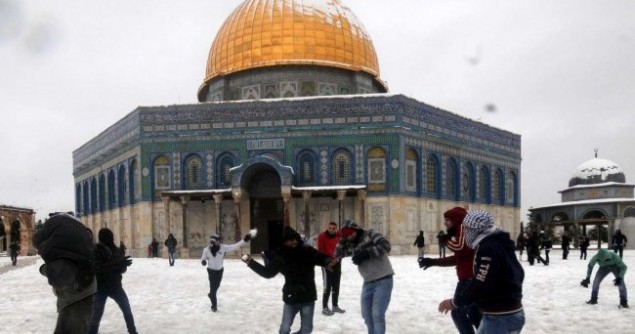 Children building snowmen and palm trees sprinkled with snowflakes were just some of the many pictures that filtered through my Facebook news feed last Thursday when Jerusalem experienced its heaviest snowfall in more than 20 years.

As I clicked on photo after photo of the snow-covered holy city and its surrounding white-laced hilltops, I was reminded of a simple moment that took place five years ago not long after a similar storm left Jerusalem, and the outlying area where I live, paralyzed by snow.

It also started with an exchange of snowy photographs. I was having my house renovated and had hired the services of a Palestinian man, a painter from a small village just outside Jerusalem, not far from Bethlehem. He had a special permit to work in Israel and each day would cross through one of the checkpoints that keep Israelis and Palestinians apart, to come paint my house.

On one of the days, while the painter was taking a coffee and cigarette break outside in the spring sunshine, I had my first real conversation with a Palestinian. Even though I had lived in Israel for 13 years, I’d never really been given the chance, or even had the inclination, to meet or talk to anyone from the “other side” – Palestinians who live over the so-called green line or current physical border that separates the two nations.

As we sat together, I remarked how amazing it was that just a few weeks earlier the garden had been frozen by snow and how my youngest daughter, then aged two, had seen the wet white stuff for the first time. As someone born and raised in Britain, I impulsively use “weather conversations” as a way to break the ice, especially with people I assume have nothing in common with me.

Suddenly, the painter whipped out his cellphone. He proudly began to show me photos of him and his own children playing in the snow outside a house that did not look too different from my own. I shared with him the shots of my own kids and we agreed how sweet all the children were.

As we exchanged photos, I could not help but ponder how this man and his family – people who I thought were so different to me and who might even be considered my enemies – would delight in the simple pleasures of life in the same way that I did.

The image of his children playing in the snow came back to me last week when intense storms hit most of the Middle East and affected us for better or for worse, regardless of race, religion or nationality.

During the week, we heard about people being stranded for hours in their vehicles during torrential downpours and losing their homes and belongings to intense flooding as nearby rivers broke their banks. Some even lost their lives on icy roads or in gushing water. Mother Nature succeeded in wreaking havoc without bias against Israelis, Palestinians, Lebanese, Syrians, Jordanians and others.

In one story shared after the storm, Captain Adiya Hazani, a company commander of the Israeli Kfir Brigade based near Jenin and Tulkarem, received reports that some Palestinians were missing. A group of people had been travelling from one village to another and had become trapped in their cars when the Alexander River, near Nablus, flooded.

After the dramatic rescue, the soldier told the Israeli army website, “I didn’t even think twice about it. People’s lives were in danger. I was ready to take the chance.”

He added, “We are in a complicated situation with the Palestinians. But at the end of the day, we’re all human beings.”

That point was not lost on me last week as Israeli and Palestinian friends on Facebook shared photos of themselves enjoying the rare treat of snow. I took turns “liking” photos of Jerusalem’s Old City shot alternatively by professional Palestinian and Israeli photographers. I also got to judge pictures of snowmen, women and even dogs, artistically created by people from all sides.

For the second time in my life, I realized how much events that are beyond our control, such as extreme weather, can end up showing our common humanity and uniting us all.

Ruth Eglash is the former Deputy Managing Director of The Jerusalem Post, and now contributes to a variety of international news agencies and publications. She lives just outside of Jerusalem.