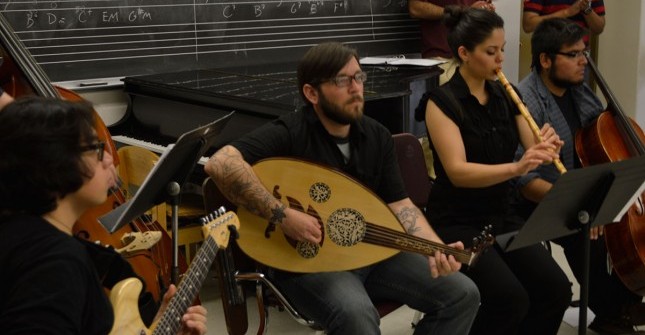 Every so often I happen upon discussions in the Arab media about culture. One such is currently to be found in today’s edition of Asharq Al-Awsat.

Two writers debate the proposition that Gulf states do not do enough to foster Arab culture. Hamad Al-Ammari says that the Gulf should do more. Shaikha Mai Bint Ibrahim Al-Khalifa, Bahrain’s Minister of Culture, says that the Gulf is doing enough.

But the question is: what culture? And is culture something that people should “do something” about?

I’m writing this on a brief visit to the in-laws in Ireland. It’s a country that is very aware of a culture that distinguishes it from its big neighbour, the United Kingdom. When Ireland became an independent nation, the government, societies and dedicated citizens went to great lengths to promote their vision of Irish culture. Gaelic, the Irish language, was dying before independence. For the past 90 years every school teaches it as an obligatory part of the curriculum. Today it sits proudly alongside English, as the official language of government.

Irish sports – hurling and Gaelic football – have also flourished under government sponsorship. Irish music, epitomised by the Chieftains, the Dubliners and countless other musicians who cut their teeth in pubs, clubs and dancehalls, is recognised throughout the world as a symbol of hibernian culture. Irish dance, in the adapted form of Riverdance and similar shows, pulls in thousands of theatre goers in New York, Sydney and London.  And few big cities in the world are without the obligatory Irish bar where you can rejoice in a pint of Guinness.

Yet 90 years on, how different is Ireland from the UK, the US and continental Europe, from which it draws on cultural influence?

Read the Irish Daily Star, Ireland’s leading tabloid, and you will see stories of celebrities and sex, drugs and murder, scandals and sport. Listen to piped music in a pub, and you will not find the Chieftains. Ask the average Irish city-dweller how often they speak Irish, and many will tell you that the last time they spoke Irish was before they left school. They will tell you that they love Gaelic games not because they are examples of Irish culture but because they are great sport. Likewise, Guinness is a great drink.

Ireland, in common with several other European countries, is bending under the weight of austerity programmes. It obsesses over English Premier League football, Pop Idol and the cult of celebrity. It worries about its immigrant population, about house prices. Those who can afford it still take holidays in Florida, Spain and Portugal. In these respects it is little different from the UK. Read an English tabloid, and you could be reading an Irish one. In the final analysis, has nearly a century of state-sponsored Irishness made a significant difference to the attitudes, behaviours and quality of life of the Irish? I’m not convinced it has.

Look now at the Arab world. What is the culture that governments are anxious to preserve? The Arabic language? For sure. But when it comes to what needs to be preserved and what does not, the region is deeply fractured in its perceptions, just as it is politically and socially.

Is wall graffiti in Beirut and Sana’a any more or less representative of Arab culture than the remnants of earlier times – wind towers, basket-weaving and calligraphy? What is the “set of doctrines, values and rules that all members of the society share, something that distinguishes them and reflects their civilized stature” to which Hammad Al-Ammari refers? Is there any society in the Arab world that universally shares such doctrines? Beyond the Arabic language and the rituals and rhythms of Islam, I see no such universality.

In the Arab world you will find camels and Cadillacs, souks and shiny western malls, poetry and hip-hop, gahwa and Big Macs, bedouin and city boys, Umm Khalthoum and Arab Idol, qat and cocaine, authoritarian governments and failed states, Arabs and expatriates, Sunni and Shia.

How do you determine the culture to be supported and promoted within such a mish-mash of influences? Only, I suggest, by looking at the past rather than the present. By creating artificial contours in the landscape – by changing the direction of rivers of human consciousness, creating tidal barriers and buttresses that delay the inevitable course of nature.

And this is precisely what many of the Gulf states are trying to do, with limited success. Just as the Irish did many years ago.

Al-Ammari seems to blame governments for the dilution of Arab culture through the malign influence of the West – a familiar song:

“As for Gulf governments that failed to keep pace with the ever-developing civilization that accompanied their vast oil wealth, their interest in culture was superficial. This is demonstrated by their building huge museums and buying world-famous paintings at astronomical prices, as well as promoting clamorous musical performances and bringing in international singers, as if culture was something to be bought and sold.

It is unfortunate that these governments shirk their responsibility towards their own culture as well as towards raising new generations, particularly since they are oil-producing countries and are not short of financial resources. It is not sufficient to sing the praise of the Arab Peninsula or of old Arab travelers and historians. Rather, the enormous energies of youth must be exploited, for they are more vulnerable to external influences like the prevalence of the English language, Western culture, Western media and satellite TV channels, films and music. There are also several domestic effects represented by the large numbers of foreign laborers and the domination of foreign companies, institutions, universities and schools that attract our sons, particularly from the young generation. This is not to mention that their school syllabuses and programs are not commensurate with our Arab culture and identity.”

Shaikha Mai, on the other hand, firmly believes that top-down interventions by governments are effectively promoting Arab culture:

“Gulf governments have worked on developing their cultural and intellectual identities, with the help of their people. This can be seen in the fact that some Gulf governments have worked for many years to form a cumulative, over-arching culture that encompasses the natural development of its people, traditions and customs. This process is an exceedingly complex and lengthy one, and does not produce instant results. It is a process that can be understood through its results, strengthening and entrenching the country’s intellectual and cultural identity.

Looking at the cultural movement across the Gulf, there are a number of institutions that seek to develop Gulf culture. Art galleries, music events and humanities studies at universities and colleges provide people in the Gulf with the opportunity to get involved in cultural events, creating harmony between individual identity, regional identity and global cultural development. In addition to this, there are cultural exchange programs and events that are open to the public, including local and national festivals and celebrations. These social gatherings can strengthen the character of the nation, and help people understand others.

Gulf countries have adopted a system that absorbs their people’s skills and talents, in an effort to create an environment where past experiences and future aspirations are able to coexist. Governments have encouraged the establishment of cultural clubs, centers and institutions to support cultural development and attract experts, researchers and intellectuals, with the purpose of integrating seamlessly with local communities. This is a civilized way of integrating cultural development, particularly following the urban growth in the Gulf that has provided a suitable place for cultural, intellectual and artistic activities. In addition to this, there are also cultural institutions and public libraries that specialize in cultural activities for children, to help them develop a love of and desire for culture.”

Al-Hammadi is wrong. This is not about the corrosion of values and traditions by the influence of the West. The Arab world has constantly absorbed influences from its neighbours from before the age of Islam. And in recent centuries, you could argue that the influence of the East is equally as strong. Jeddah, the gateway to the Haj, has the widest gene pool in Saudi Arabia, and owes as much to Persia and the Indian subcontinent for its culture and traditions as it does to its Arab roots, many of which come from Egypt, the Levant and Africa. Bahrain is also deeply influenced by its citizens of Indian and Persian origin.

And, with all due respect to the Sheikha, she is being unrealistic if she believes that the government initiatives she refers to will effectively change the natural evolution of popular culture, because there is no “cumulative over-arching culture that encompasses the natural development of its people, traditions and customs.” One can hardly describe the changes in Gulf since the discovery of oil as naturaI, any more than one can fabricate consistency between the urban cultures of the trading cities with the Bedouin culture of the hinterland.

If any group of states is responsible for the cultural confusion currently reigning in the Arab world, it is those in the Gulf. By exploiting the resources that lie beneath the earth, they have sucked in the rest of the world, for better or for worse. They have lost what little control they had over their pre-oil culture, and all the billions that they sink into cultural landmarks and programmes will not bring it back.

In my humble opinion, they should let the culture evolve naturally, as it always has, and stop trying to create mammoths from corrupted DNA. What resonates will flourish. What no longer seems relevant to future generations will end up in museums, folklore festivals and history books.

So let the kids support Barcelona, study abroad, write their poetry, send their texts in Arabezi. But also help them to discover their history, their ancestry and the myriad of influences that created the societies in which they live, and which they in turn will influence and change.

What will evolve will evolve, and in the long run, there is little that governments, bureaucrats and nostalgic conservatives can do about it.