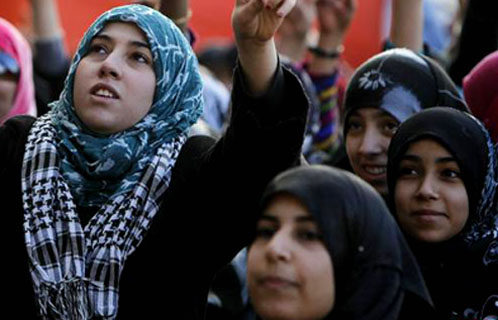 In Libya, Egypt, Bahrain, Yemen, Tunisia and elsewhere, women have stood with men pushing for change. In Libya, Iman and Salwa Bagaighif are helping lead, shape and support protesters. And in Egypt, the Egyptian Organization for Human Rights, one of the oldest and most well-known non-governmental organisations in Egypt, estimated that at least 20 per cent of the protesters were women.

For example, the 26-year-old co-founder of Egypt’s April 6 Youth Movement, Asmaa Mahfouz, mobilised thousands of youth in support of the protest through her impassioned YouTube video. In Yemen, a 32-year-old mother of three, Tawakkul Karman, helped organise protests against the current government.

Yet women’s leadership in 2011 is not a new phenomenon. In Iran, women have for many years successfully pushed for greater freedom in personal status law, and greater employment and educational opportunities. Many Iranian women have been imprisoned simply for endorsing the Million Signature Campaign, which seeks equal rights and the repeal of laws that discriminate against women.

Women have been using social media and leveraged communications technology to pursue greater social and political openness since before the arrival of Iranian President Mahmoud Ahmadinejad. Notwithstanding a rich history of non-violent activism and extraordinary leadership, women have rarely been involved in political decision-making in the Middle East and North Africa region.

At an even more basic level, women do not feel confident that their rights will be preserved under the systems emerging from recent political transformations.

In Iraq, there have been female judges since the 1950s and thus many of women’s rights have been protected since 1978 by a personal status law. Yet in 2003, the new Iraqi Governing Council sought to strip women of these rights. Only in the face of domestic petitions, letter writing and face-to-face advocacy were women successful in ensuring their rights were preserved. Iraqi women continue to face efforts to reduce their freedoms and each time they have defeated the assault.

Already Egyptian women are risking similar marginalisation. There are no women on the committee revising the constitution. In an almost uncanny parallel to the struggle of Iraqi women after former Iraqi President Saddam Hussein, Egyptians have drafted a petition, endorsed by over 60 local organisations, decrying women’s absence from transitional political bodies.

Bias embedded in the new draft constitution suggests that these concerns may be real.

The international community and the new generation of progressive, democracy-minded leaders in the Middle East need to see women as critical partners for change. The evidence is undisputable. The 2005 UN Arab Human Development Report cautions that under-employment and under-investment in women severely drains overall well-being and concludes that “the rise of women is in fact a prerequisite for an Arab renaissance, inseparably and causally linked to the fate of the Arab world.”

The world has an unprecedented opportunity to transform nations held down for decades by oppressive regimes. We must make sure that this opportunity is open to all citizens, including women.

Women’s role must be honoured in the struggle and protect against the fundamentalist push. Most importantly, their involvement will be key to enabling pluralistic, economically thriving societies to emerge in a region whose progress has been stalled for generations.

The window is small but the time is now and the opportunity is enormous. As we celebrate the 100th anniversary of International Women’s Day on 8 March, let’s remember how critical advancing the status of women will be to success.

Carla Koppell is Director of The Institute for Inclusive Security. Haleh Esfandiari is Director of the Middle East Program for the Woodrow Wilson International Center for Scholars. This article was written for the Common Ground News Service (CGNews).