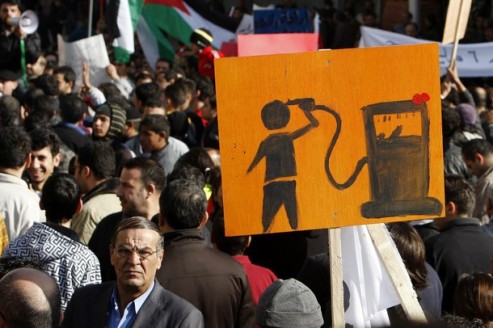 A great number of Jordanians have been glued to their television screens, watching Al Jazeera detail the fall of the Tunisian regime, the assumed exile of its leader, and the rise of the youth voice in the streets of Tunis. The view from Jordan has been interesting. It seems people range from those who are truly engaged by these events, to some who have even been inspired by them, and then those who are completely aloof if not downright oblivious to what’s happening.

The meghreb region has always been somewhat disconnected from the Levant, and had the same events happened in, say, Syria, or even Egypt, Jordanians would likely be paying a lot more attention. But that geography, and social disconnect has always maintained a bit of a gap between the different players in the Middle East. To some extent, the same can be said of the Gulf region. This may explain why Jordanians went from cheering for their national team’s win against Saudi Arabia in the Asian Cup on Thursday night, and then marched in a show of anger at their living conditions on Friday morning. That kind of contrast is typical of the Jordanian street, and more so with Tunisia being so far away.

With that in mind, local commentary, be it in newspaper columns or amongst the general street, has largely focused on mirroring events in Tunisia to what’s happening in Jordan. To a larger extent, there is general query as to whether Tunisia will inspire a domino effect in the region, specifically with regimes that seem ripe to fall, such as Egypt’s.

It is safe to assume that the Jordanian state has been watching Tunisian events closely and taking careful measures to help curb the likelihood of similar protests taking place in Jordan. Despite their denials that the two have anything to do with each other, these measures are quite obvious attempts at quelling potential violent eruptions within the Kingdom. The initial rise in prices one week (including fuel), and the subsequent lowering of those prices – a move that I don’t recall the state having ever made in the past 15 years or more – is an early indication that there is concern. The $169 million subsidy package that was recently announced is another indication of concern. The message the government has been sending out is quite clear, and ranges from “we’re doing all we can” to “look, we’ve done quite a lot”.

As various Jordanian organizations launched a few nationwide protests to demonstrate their anger on Friday 14th, those that showed up seem to be much lower than what was reported. However, one thing is for sure, those that showed up were simply put, fed up with their living situations. While the government has accused some of being opportunists, they have perhaps already lost sight of the fact that most of those protesting care little about the opportunists and more about the opportunity. Just like their brethren in Tunisia, the feeling of economic discontent is ripe in Jordan. From high unemployment, high inflation and a record deficit of $2 billion (or roughly 10% of the country’s GDP), things are simply not great. Winter represents a season where fuel prices go up, and those struggling to heat their homes or cook food get hurt the most. This represents the majority of Jordanians. More protests, specifically those that will be lead by political parties that include the Islamic Action Front and various labor unions and associations are scheduled for Sunday, taking place outside the Parliament building.

The events in Tunisia have been officially linked to events in Jordan by the people as protesters outside the Tunisian embassy are calling for Prime Minister Rifai’s resignation. We are likely to see more of that linkage in the next few days if such protests continue.

What is perhaps most interesting to me is that the government’s solution has been as unoriginal as it gets, if not simply put, typical. Creating even larger subsidy packages to reduce prices is like putting a band-aid over a bullet wound. This attempt to remedy long-term problems with short-run solutions is quite folly, and a demonstration of how the state seems to be quickly losing touch with either the people or the economic situation in general, and probably both. Such “solutions” include increased hiring of more barely-educated employees, in various parts of the public sector, which is already over burdened with personnel. Subsidy packages will likely come back to haunt us in the near future, inflicting even greater economic damage. Who will pay for it? Social security? Increased taxes? More USAID?

The state is currently facing a crucial catch-22 in its history, a situation that has been created in recent years from uninspired economic policies to a lack of genuine political and social reform. After years of attempting to reign in any attempts for true democratic reform on the political level, a struggling economy has emerged. Today, Jordan, and perhaps much of the Arab world is learning one important lesson from Tunisia: the call for political change from the domestic constituency is unlikely to happen in the region unless the economy gets bad, real, real, bad. Governments can take away, censor or control various freedoms, including the right to a free press or the right to an elected government, and people are unlikely to be moved enough to demand widespread change. That’s just the political reality of it; people can’t afford to make such demands. But if you put a man’s livelihood at stake, if their financial situation is in dire straits, then they’ll be forced to react.

Will the events in Tunisia cause a similar situation to unfold in Jordan?

Probably not. While parallels, such as those mentioned above, can be easily drawn throughout much of the Arab world where the majority of the population is struggling to make ends meet, the paradigm is quite different. Both the economic, political and social situations are completely different when it comes to these two countries. Jordanians will likely be inspired enough by Tunisia to engage in the vocalization of their financial despair, even to the extent of calling on the typical toppling of the Rifai government (or whatever government is in play). But they will, for the most part, avoid widespread violence, or calls for a complete overhaul of the system.

With that in mind, the likely outcome in Jordan is an ongoing system of cutbacks by the government, in an attempt to quench people’s anger. The worst case scenario for the state will be replacing Samir Rifai’s government with yet another government. There is no doubt that this option is always on the table as such governments are designed to be scapegoats for domestic issues, and are easily replaceable. However, having made several dramatic changes in the government this past year, I do not think the state or palace is in any rush to push that button just yet, an option that will send even greater signs of political instability in the Kingdom. To say nothing of the fact that the state has officially run out of turns when it comes to making guarantees to the people that a new entity is going to herald in new changes. That card has been played to death this past year and it will be difficult to convince Jordanians that yet another cabinet will be any different.

Moreover, these events, coupled with the Lower House’s decision to give a quick and unprecedented vote of confidence (111 out of 119) in the government a few weeks back, have gone far in demonstrating the extent to which Parliament has quickly lost all credibility from the people as an elected body. Those that gave their vote of confidence to the current Rifai government will inevitably be seen as having either been co-opted by the state from the get-go, and/or as having no leverage or credibility amongst their constituency, some of whom are already calling for the dissolution of Parliament, nearly two months after it was just voted in. An increase in criticism of the Rifai government by parliamentarians will likely happen as members struggle to regain some political credibility. Calls for another confidence vote seem to be in the making as well, with certain members revoking article 54 of the constitution. But that is unlikely to make a difference to the people protesting who will see it largely as an attempt by members to retain their seats in Parliament and avoid going down with the sinking ship.

Suffice to say, what happens next on the Jordanian street is going to be very, very interesting.