Where do Muslims Fit Within The Modern Europe? 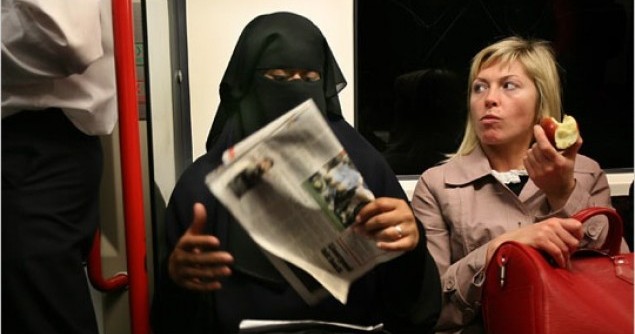 Woe is the Westerner suffering through an economic crisis. And God help the Muslim who gets in his way.

In times of economic distress that leads to job losses and an uncertain future, Western Europe seeks scapegoats to vent its frustration. Enter the Muslim community.

Muslims and Islam have been the center of the cultural debate in Europe since 9/11, particularly when countries relaxed immigration requirements. The debate has intensified as Europe struggles to overcome its economic malaise. An estimated 20 million Muslims live among the European Union’s 500 million people. According to the Brookings Institution, France has the largest Muslim population at 8 percent, the Netherlands has a 6 percent Muslim population, Germany at 4 percent, and the United Kingdom’s Muslim population is estimated at 3 percent.

Right-wing political parties have gained wide acceptance among Europeans by seizing on voters’ worst fears that immigrants are responsible for stealing jobs and causing the crime rate to soar. Yet they often contradict themselves by complaining Muslims segregate themselves from society by living in crime-ridden ghettos — and perhaps forgetting few people want to live in crime-ridden ghettos — or that Muslims are forcing their culture and religion on European society. Leading the charge with such specious arguments are Dutch politician Geert Wilders’ Freedom Party, Switzerland’s Swiss People’s Party and the Federal Democratic Union, and Germany’s Christian Democratic Union.

Most Muslims clearly want to assimilate into European society. The 2005 riots in predominately Muslim neighborhoods in Paris had nothing to do with religion, as right-wing extremists would have the white middle class believe, but about wanting employment and a piece of the European economic pie. Like most bigoted arguments about ethnicity and religion, there is a kernel of truth in some Muslims refusing to assimilate into society. The language barrier faced by first-generation immigrants, refusing to live in neighborhoods where alcohol and nightclubs are abundant, and the urgent desire for protection and comfort among people who share similar values all lead to self-segregation.

To native Europeans, self-segregation gives rise to Islamic extremism and jihadists. However, as Jocelyne Cesari points out in her book “When Islam and Democracy Meet,” people need to make the distinction between what is a religious conservative and what is a jihadist.

Given the climate European Muslims live in, it’s hardly surprising they choose to isolate themselves. And it’s precisely what Europe’s right-wing political parties want. By passing Taliban-style legislation that prevents freedom of choice in the guise of freeing Muslim women from religious oppression, governments further marginalize ethnic minorities. Few people are willing to give up their cultural traditions and religious beliefs, so they will retreat into the comfort of their own community.

Muslims, like most immigrants, want to embrace all that democracy has to offer. After all, they left behind government oppression and absence of economic opportunities to pursue life in a democratic country. But when that country passes laws not that much different from what they rejected in their homeland, the desire for assimilation dwindles.

Although second- and third-generation European Muslims continue to make great strides in entering the workplace and academia, government-influenced roadblocks prevent low-income Muslim immigrants from finding employment, which is the first step toward assimilation. Poor language skills, due largely to under-funded schools in low-income neighborhoods and lack of childcare for young mothers, exacerbate isolation from society.

Rather than focusing on cultural barriers, governments should look at integrating Muslims into European society as a socioeconomic issue. At the same time, Europeans need to reinterpret what it means to be an European. If one in 10 people in France is a Muslim, does that make France solely a Christian nation? Not so much. As Cesari points out in her book, the blame for lack of assimilation can’t be placed at the feet of Muslims. Instead, Europe must “completely rephrase” the European national identity.

2 Responses to Where do Muslims Fit Within The Modern Europe?