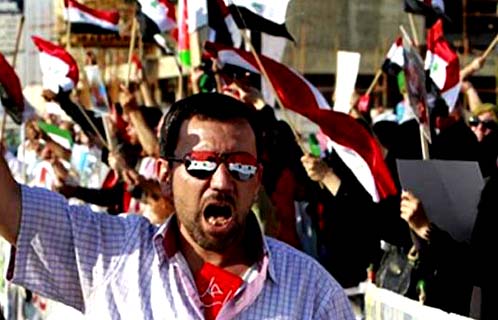 The half a million protesters gathered in Hama on Friday to demand the downfall of Bashar Al Assad have shown their mettle in the face of a brutal crackdown of the Syrian president’s security forces.

As a result, gestures like the visit to Hama by the ambassadors of the United States and France are unlikely to impress them, let alone really help them.Of course, the visits to a city that symbolizes the brutality of the Assads because of the 1982 crackdown that left at least 10,000 dead by Mr. Assad’s late father, President Hafez Al Assad, signals US and French support for the protesters. That symbolism is reinforced by the 63 protesters killed last month by Mr. Assad’s forces.
The US and French support however has little meaning as long as the United States and Europe refuse to join the protesters’ demand for Mr. Assad’s departure. Western nations like their Arab counterparts would like to see Mr. Assad retain his power by engaging with rather than cracking down on the protesters because they worry that Islamists or other less predictable forces would succeed him.Granted, the United States and Europe have publicly condemned Mr. Assad’s crackdown and slapped sanctions on the Syrian president and his closest associates. The Arabs by contrast shine in their silence about events in Syria.
But like the visits of the ambassadors, the sanctions have had no effect on the Assad regime and certainly not persuaded it that the price of the continued crackdown is one it can ill afford. At least eight protesters were killed on Friday across Syria and a total of 1,500 since the mass anti-government protests erupted three months ago.Rather than driving the message home that the West is serious about its condemnation of the violence, the ambassadors’ visits have allowed Mr. Assad to trumpet his charge that the protests are being instigated by foreigners and the product of foreign interference in Syria’s domestic affairs. That is not unimportant in a country where Mr. Assad continues to have a popular base and the business community, as well as minorities that have so far shied away from joining the protests.

“The US ambassador met with saboteurs in Hama… who erected checkpoints, cut traffic and prevented citizens from going to work. The ambassador incited these saboteurs to violence, to demonstrate, and to refuse dialogue,” the Syrian interior ministry said in a statement.

The visit of the ambassadors against the backdrop of a wishy-washy Western policy that professes to back anti-autocratic protest across the Middle East and North Africa but on the principle of all animals are equal but some are more equal than others prefers to pick and choose where regime change should take place and where not ultimately highlights the ambiguity of US and European attitudes. It is an ambiguity that resonates in the Gulf and among Syria’s neighbors.

Like the West, the Arabs were quick to condemn the brutal violence of Libyan leader Col. Muammar Qaddafi who had not endeared himself to many of his Arab counterparts by repeatedly ridiculing Gulf monarchs. By contrast, the Arab silence about Syria is deafening even if common logic would suggest that Mr. Assad’s close ties to Iran would be reason enough for the Saudi-led Gulf Cooperation Council (GCC) to want to see the Syrian president go.

Yet, in a reaffirmation of a policy shared with the West that the devil you know is better than the devil you don’t, Mr. Assad’s downfall would move the Arab revolt’s success from North Africa where it earlier this year toppled the leaders of Egypt and Tunisia to the heart of the Middle East and dangerously close to the Gulf. So would the demise of Yemeni President Ali Abdullah Saleh.

But in contrast to Mr. Assad, Mr. Saleh has suffered severe wounds in an attack in early June on his presidential compound in Sana’a that forced him to seek medical treatment in Saudi Arabia. That makes a change of guard more palatable and easier to defend for those bent on preserving as much of the status quo as possible in a world dominated by anti-government protests and demands for greater transparency and accountability.

The Libyan rebels moreover brought assets to the table that Syrian opposition forces have yet to develop. The Libyans controlled the eastern part of the country and produced a clearly defined and organized rebel leadership that won them a United Nations-endorsed no-fly zone and the support of NATO. Mr. Assad’s opponents have demonstrated unrivalled bravery, determination and persistence but remain at the mercy of Syrian security forces with no identifiable leadership.

The West is too scared of who might succeed Mr. Assad, the Arabs are hedging their bets and neither of the two wants to see the Arab revolt spread southward from Syria.

Nonetheless, the writing in Syria is on the wall. Increasingly, the Middle East is turning into a region where autocratic government is as much a recipe for instability as it is for skin-deep stability.

A Syria ruled by the iron fist of Mr. Assad is unlikely to remain stable for any significant period of time. If Mr. Assad were to have a change of heart and engage in political and economic reform, the question would be how long it would take to vote him out of office or for mass protests to force him to go.

The bottom line is that Western and Arab nations have more to gain from real engagement with Mr. Assad’s opponents than from symbolic gestures and silence.