The American Threat to Syria’s Revolution 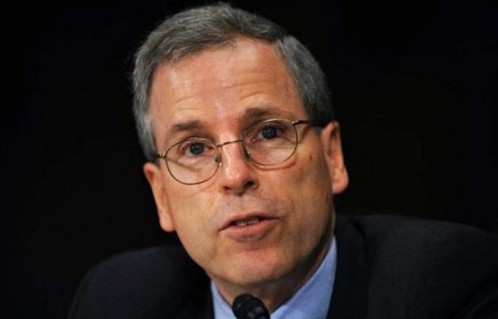 United States ambassador to Syria Robert Ford is quite a feisty diplomat. He shows up unannounced and uninvited at various hot spots in the country, greeted with varying degrees of enthusiasm and, oftentimes, anger.

When he made a highly touted appearance in the city of Hama in July, residents reportedly greeted him with flowers. However, his appearance at the home of an opposition figure in Damascus on September 29 earned him a salvo of tomatoes and rocks from angry protesters.

Naturally – and as confirmed by various WikiLeaks cables – American diplomats don’t behave independently from the main organ of US foreign policy in Washington, the State Department. It is also safe to assume that Ford’s alleged solidarity visits throughout Syria were not intended to cater to a Syrian audience. We all know how most Syrians feel about US foreign policy in the region.

Writing in the Gallop website on June 25, 2009, Steve Crabtree described a decision by the Barack Obama administration to send a US ambassador to Syria (the first one in six years) as an “important signal that it seeks improved relations between the two countries”. One of the unstated objectives of this was to “contend with widespread anti-US sentiment among Syrians”.

According to a March 2009 poll, nearly two-thirds of Syrians (64%) have unfavorable views of the United States, and more (71%) disapprove of the US leadership. One could argue that such views are sensible, considering the US’s history of anti-Syria policies, and its lack of support for the Syrian people’s urgent call for democracy and reforms.

In the past decade, if not longer, Syrians have watched as US policies in the region destroyed two neighboring countries, Iraq and Lebanon. For several decades now, they have seen the US support and subsidize the Israeli occupation of Palestine. The targeting of Syria in the US Congress and plots to “roll back” Damascus to ensure Israeli domination is a whole different story. Few in Syria believe that the interests of the people in revolt are at the heart of US policies.

Syria had already survived the regime-change frenzy that took Washington elites by storm after their “success story” in Iraq. This survival was aided by two conditions. One was the stiff resistance in Iraq following the US invasion, which thwarted the US’s long-term agenda for the country. Another factor was the number of concessions made by the Bashar al-Assad regime, which had played its role well in the so-called “war on terror”.  Israel’s friends in the US – government, think-tanks and media – were clearly frustrated that the US government was forced to settle for a status quo in Syria.

This defied the conventional wisdom imparted by the neo-conservative likes of Richard Perle, Douglas Feith, David Wurmser and others. While the neo-cons were ready to move into a new phase – one that went beyond simply “containing Syria” – circumstances were no longer suitable; thus the unwelcome return of the containment policy, whereby Syria would pose as a guardian of Arab resistance while ensuring that its border with Israel (or rather its own occupied Golan Heights) remained calm.

The Syrian people began their uprising for long-denied rights in March. The government responded with the only method it knew well: sheer brutality, coupled with illusory language of change and reforms. The world watched as Syrians died in droves. But then the politicking began. Some genuine Syrian opposition groups passionately organized to give a voice to their people at home. Others also organized, although their reasons were not so genuine.

“The State Department has secretly financed Syrian political opposition groups and related projects, including a satellite TV channel that beams anti-government programming into the country, according to previously undisclosed diplomatic cables,” reported the Washington Post on April 17. It was WikiLeaks that exposed a US program founded and financed by the George W Bush administration and continued under Obama’s.

“The US money for Syrian opposition figures began flowing under President George W Bush after he effectively froze political ties with Damascus in 2005,” according to the Post. While Obama verbally set himself apart from his gung-ho predecessor, finally appointing a US ambassador to Syria in January, his administration continued to facilitate ties and secretly fund opposition groups and figures.

The US insists on enforcing the same failed policies of the past, but expects different results every time. Propping up an Iraqi opposition that took part in the destruction of Iraq (following the US invasion of 2003) seems to be the model used by US policymakers in Syria. And this too is doomed to failure.

The US is also leading the charge against Syria at the United Nations, once more trying to co-opt the Security Council to impose crippling sanctions on Damascus.

These sanctions are already felt in the streets of Syria, but hardly among the elites – a characteristic of all US sanctions throughout history. The prices of most basic foodstuffs are already skyrocketing and this trend is likely to continue.

United States involvement in Syria is the second-greatest danger facing the Syria uprising (the first being the cruelty of the regime). Sweeping sanctions and threats will turn the conflict into another American fight against an Arab regime, as opposed to an unadulterated people’s uprising – a revolution even – for the rights of Syrians and the future of their country.

Robert Ford is a mere conduit of failed US policies. His insistence on hijacking the diplomatic scene in the country will garner him some media attention, and perhaps a book deal. But for now it will be a liability for the Syrian uprising, which needs to remain independent from US posturing in order to triumph.

And in the long run, the economically frail and militarily compromised US cannot be an effective player in shaping the political landscape in Syria – or anywhere else in the Middle East. Ultimately, the future of the Syrian people will be determined by their own fortitude.