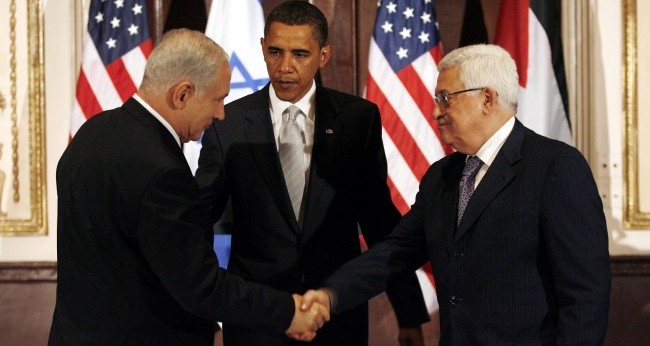 Whatever happened to the Israeli-Palestinian peace process? You could be forgiven for thinking everyone packed up shop a while ago and forgot to inform you. There’s been barely a peep about it since the revival of talks was greeted with great fanfare back in July.

The negotiations, which have been conducted in a fug of secrecy, flitted briefly back on the radar last week when the US secretary of state, John Kerry, met Israeli prime minister Benjamin Netanyahu for what the media called an “unusually long”, seven-hour meeting in Rome.

Much of the conversation was held in private, with not even officials present, but, according to reports, discussions concentrated on the revived peace process. Mr Kerry, concerned about the lack of tangible progress, is believed to have tried to pin Mr Netanyahu down on his vision of where the nine-month negotiations should lead.

Mr Kerry’s intervention follows weeks of mounting Palestinian frustration, culminating in rumours that the talks are on the verge of collapse. After a meeting with Mr Kerry in Paris, an Arab League official, Nasif Hata, added to the desultory atmosphere, saying there were “no positive indications of progress”.

Palestinian president Mahmoud Abbas, on a tour of European capitals last week in search of diplomatic support, tried to scotch suggestions that the talks were at a “dead end”. They were “difficult”, he admitted, and after nearly three months of meetings the two sides were still “at the beginning of the road”.

But privately his officials have expressed exasperation at Israel’s inflexibility and the miserliness of its opening positions. Earlier this month the Al Hayat newspaper reported that Israel had refused to discuss the key issue of borders, instead focusing exclusively on its own security concerns.

None of this is surprising. At Israel’s insistence, the talks have been entirely shielded from public view. Privacy, Israel argued, would ease the pressure on the two parties and give them greater room to be forthcoming and creative.

The reality, however, is that the lack of scrutiny has allowed Israel to drag its feet. Israel’s lead negotiator, Tzipi Livni, has already warned that the talks’ timetable is likely to overrun.

Similarly, US envoy Martin Indyk was supposed to be Mr Kerry’s eyes and ears in the talks. Instead he spent the first two months locked out of the proceedings, apparently again at Israel’s instigation.

Secrecy, Israel hopes, will give it the cover it expects to need when – as seems certain – the talks end inconclusively, or the Palestinians storm out. Widespread ignorance about developments can be exploited to cast the Palestinians as the treacherous party, as occurred following the collapse of the Camp David talks in 2000.

But belatedly we are seeing a little of the leadership role Washington promised. Mr Indyk is said to be now actively involved. The rate of meetings between the negotiators has been stepped up sharply in the past two weeks. And last week’s meeting in Rome suggested that the US hopes to pressure Mr Netanyahu either into making a big concession or into beginning the face-to-face talks with Mr Abbas that this process is supposed eventually to lead to.

According to Mr Hata, the US has also promised the Arab League it will “take action” if there is no breakthrough by January, presenting “viable suggestions for ways to end the thaw”.

But whatever Mr Netanyahu told Mr Kerry in private last week, few believe the Israeli prime minister is really ready to seek peace. Earlier this month he set out in public his vision for the talks, in a follow-up to his famous speech in 2009, when, faced with a newly installed US president, Barack Obama, he agreed to a two-state solution.

This time, speaking from the same podium, he sounded in no mood for conciliation. “Unless the Palestinians recognise the Jewish state and give up on the right of return there will not be peace,” he said. He denied the “occupation and settlements” were causes of the conflict, and insisted on Israel’s need for “extremely strong security arrangements”.

It is this kind of uncompromising talk that has discredited the negotiations with those outside the White House.

Last week Yuval Diskin, a recent head of the Shin Bet, Israel’s domestic intelligence service, warned that there was no realistic prospect that “the Israeli public will accept a peace agreement”. Israelis’ distrust of the negotiations is fuelled by the constant opposition of government ministers.

In a further show of dissension, they have backed a bill that would require a two-thirds parliamentary majority before Israel can even broach at the talks the key issue of dividing Jerusalem. If passed, the legislation would turn the negotiations into a dead letter.

On the other side, Hamas has grown emboldened. Ismail Haniyeh, the prime minister in Gaza, has called on Palestinians to renew a “popular uprising”, just as a 1.5km tunnel Hamas had built into Israel was exposed.

In the West Bank, a spate of attacks and killings of Israelis over the past few weeks – after a year without the loss of a single Israeli life from the conflict in 2012 – has provoked wild speculation about whether a Palestinian uprising is imminent. A Palestinian driving a bulldozer who went on a rampage through a military base near Jerusalem only reinforced the impression.

Conveniently, Mr Netanyahu has exploited widespread opposition to the next round of Palestinian prisoner releases, due tonight – the carrot to keep the Palestinians at the negotiating table – to justify plans for yet more settlement building.

All indications are that these talks, like their predecessors, are doomed to fail. The question is whether the Palestinians have the nerve to unmask the charade. If not, Israel will use the peace process as cover while its settlements devour yet more of the Palestinian state-in-waiting.