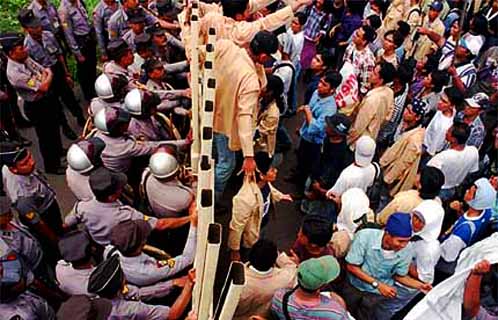 Tunisia’s revolution likely reminds many Indonesians of their country’s situation 13 years ago when Suharto, who ruled the country for over 30 years, was toppled after a series of protests following the 1997-98 Asian financial crisis.

Today, Indonesians can proudly say that they live in a democracy, one that – along with Turkey – is often highlighted as a successful example of democracy in a Muslim-majority country.

Indonesia’s transition to democracy has not been completely smooth. It has been marred by communal violence, the rise of radical Islamic political groups with aspirations to implement a conservative interpretation of Islamic law in the country and the potential comeback of the military to politics, given the enormous influence they enjoyed under the Suharto regime.

Yet, the process of democratic consolidation in Indonesia continues. Since Suharto was toppled in 1998, three free and fair elections have been conducted. Despite the challenges that Indonesians are facing now – including corrupt and incompetent public officials – this country has made remarkable progress.

Indonesians are now free to voice dissent, monitor and criticise their government without fear of being jailed or going missing. And when abuses do take place, Indonesian’s free press routinely uncovers corrupt acts by the government. While some retired generals are making their way into politics as civilians, for the most part the military has gone back to the barracks.

Credit should go to all Indonesians who, in these 13 years, have shown their unshakeable commitment to democracy. Yet, the contributions of the transitional regime should also be specifically acknowledged.

When Suharto was toppled during his seventh five-year term, on 21 May 1998, he transferred power to his vice president, Bacharuddin Jusuf Habibie, the German-educated technocrat who helped develop Indonesia’s aviation industry in the late 1970s. Habibie was not perfect; he was known as the “golden boy” of the former dictator. But certain actions he took during his presidency had a profound effect on Indonesia’s transition to democracy.

One important move that Habibie made was loosening control over freedom of expression. Two weeks after he was sworn in as president, his administration abolished the Minister of Information’s authority to give and revoke print media licenses. Hundreds of new publications emerged and existing publications resumed their role as watchdog to the new government.

Indonesia’s media were there to cover the elections the following year, analyse parties’ policies and report irregularities. While Indonesian’s media freedoms still fall short of international standards, media are at the forefront in the battle against corruption and have become a hallmark of Indonesian democracy.

Not long after media freedoms were loosened, the House of Representatives (DPR) passed a regulation that guaranteed the freedom of assembly, allowing demonstrations and public rallies so long as the police are given prior notice.

Like Tunisia, Indonesia was a police state for 30 years: freedom of expression was curbed, dissenters were either jailed or went missing, and the military penetrated all levels of government and monitored any possible subversive action.

Changes by the Habibie Administration were drastic and restored the most crucial ingredient in the development of democracy: freedom of expression.

In another celebrated move the government proposed bills, which were later passed by the DPR, to liberalise the political party system and improve the electoral process. An independent election committee was set up and civil servants, whose votes had always been allocated to the ruling regime, were free to choose any political party they wanted.

On June 1999, when the world watched Indonesians go to the polls in the most democratic election since 1955, they had their choice of 48 political parties.

When results showed that only a handful of political parties could obtain sufficient votes to secure places in the parliament, the party system was simplified. But instead of enforcing this reduction in political parties, it happened naturally through a democratic process.

Indonesia’s democracy is still far from perfect and Indonesians must continue to tackle challenges to democracy, but their experience shows us that no matter who leads Tunisia during its transitional phase, guaranteeing freedom of expression and paving the way for political liberalisation can smooth the transition to democracy