Reaction to ‘The King’s Speech’: ‘Disappointment’ 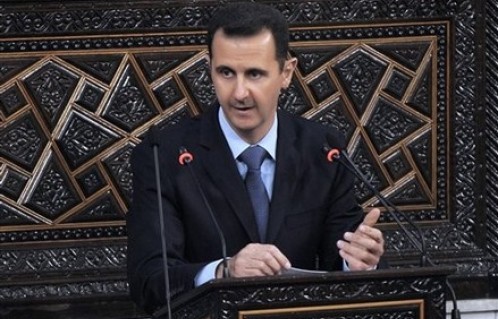 It was to be The King’s Speech. The words that could turn the situation around, or seal his fate.

After Buthaina Shaaban’s promising announcements last week, there was optimism, even among my favourite pessimists. Today, that all changed. Even supporters of Bashar Al-Assad are depressed.

We were expecting the revocation of the emergency law, at the least. A new political parties law, and the opening up of the media, at best. We got none of it.

Instead, we heard conspiracy theories, with the president blaming foreign satellite channels (Al Jazeera) and foreign forces (Israel?). And it sounded as ridiculous as when Ben Ali and Mubarak uttered those words.

But Bashar isn’t Ben Ali or Mubarak. He isn’t universally hated. Indeed, he is generally given the benefit of the doubt, even liked in many quarters. Which is why it was so disappointing that today’s speech will have only emboldened his opponents.

To his credit, Bashar did admit that mistakes had been made, and said not everyone who protested was a conspirator. And he did also say that not everything was the result of a foreign conspiracy.

Syria’s optimists are in mourning. Syria’s doom-mongers are partying.

The only good thing to come of this crisis is the amazing quality of writing on Syria. Here are some more essential reads (Josh Landis did get there before me on all three of these! Hat-tip). They were all written before the speech, and they give a sense of the hope being pinned on to today’s announcement:

“What we have in Syria is not yet a revolution. It is unrest in pursuit of legitimate reform,” a Syrian official said. “Assad is a popular president. If there was a vote tomorrow, I think he would win 60% or maybe more. We have the problem of economic corruption but not political corruption. Assad has a lot of credit in the bank. He needs to cash it in or else we are heading for the unknown … Whatever happens, Syria has changed. The wall of fear for expressing your views has collapsed.” …

Assad’s decision to sack his cabinet, even as pro-regime protesters filled the streets of many cities, may help answer these doubts – and help him achieve a clean break with Assad Sr’s era. But in his televised speech he will need to go further. His task is to convince the majority of Syrians who, if officials are to be believed, want reform rather than regime change, that the country can make a new beginning, that a new order is finally replacing the old.

The Syrian President I Know, David Lesch (author of the excellent biography of Bashar Al-Assad, The New Lion of Damascus)

I [saw Bashar] being consumed by an inert Syrian system. Slowly, he replaced those of questionable loyalty with allies in the military, security services and in the government. But he does not have absolute power. He has had to bargain, negotiate and manipulate pockets of resistance inside the government and the business community to bring about reforms, like allowing private banks and establishing a stock exchange, that would shift Syria’s socialist-based system to a more market-oriented economy.

Even with the escalating violence there, it’s important to remember that Syria is not Libya and President Assad is not Col. Muammar el-Qaddafi. The crackdown on protesters doesn’t necessarily indicate that he is tightening his grip on power; it may be that the secret police, long given too much leeway, have been taking matters into their own hands.

What’s more, anti-Assad elements should be careful what they wish for. Syria is ethnically and religiously diverse and, with the precipitous removal of central authority, it could very well implode like Iraq. That is why the Obama administration wants him to stay in power even as it admonishes him to choose the path of reform.

Today, President Assad is expected to announce that the country’s almost 50-year emergency law, used to stifle opposition to the regime, is going to be lifted. But he needs to make other tough choices, including setting presidential term limits and dismantling the police state. He can change the course of Syria by giving up that with which he has become so comfortable.

By all accounts, the debate about how to deal with the growing protests has led to increasingly violent confrontations inside the regime between would-be reformers and hard-liners. The outcome of this internal contest remains uncertain.