Re-Election: The Arab-Americans Obama Has To Thank 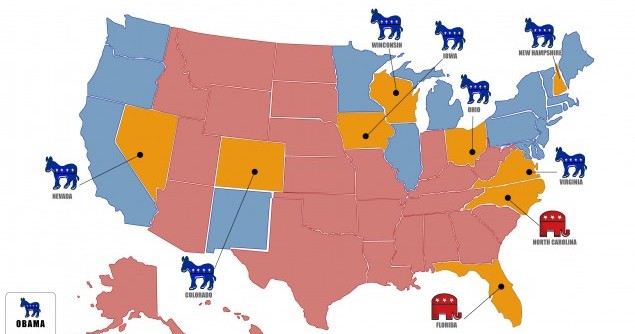 Arab Americans are like the majority of American voters–they are primarily concerned about the economy, health care, the education of their children, the environment and favor fair tax reforms; they are troubled about the rising number of the unemployed and poor, the human and financial cost of America’s two decade wars, the direction of US foreign policy in the Middle East and their country’s world standing.

Arab Americans (Christian and Muslim) make up 0.5% of US voters and on November 7th they played a critical role in the 2012 US presidential election casting their votes strategically- impacting the election results in a big way. Collectively they handed Obama a second term, secured Democrats control of the Senate and made their voices heard in local state elections. Concentrated  in Key battleground states of Florida, Michigan , Ohio, Pennsylvania and Virginia their 4 million votes were significantly weighted considering the small margin of the popular vote Obama won (3,255829 votes). In Florida alone their vote secured Obama a crucial win.

According to the 2000 Census Bureau, the state of Florida is home of 77,000 Arab Americans, 63 percent being Christian and 24 percent Muslim. Florida’s Arab American record voter turnout on Election Day tipped the scale in favor of Obama giving him a slim margin of victory with 73,855 votes.

Arab Americans made a deliberate choice to support the better leader for their country. They mobilized their community, registered new voters and in extraordinary numbers went to the polls delivering a decisive win for Obama, the Democratic Party and while at it made critical contributions to key state wide elections.

The Arab American vote was not a resounding affirmation of Obama’s past four years record as it relates to his administration’s treatment and handling of Arab Americans.  They endorsed Obama while well aware that during his administration federal agencies continued and expanded the Bush administrations’ profiling guidelines, broadened the authority and scope of the Patriot Act , sanctioned the employment of ethnic mapping, spying, coercing and unethical use of informants to collect information in the most intrusive manner. During Obama’s first term Arab Americans experienced  unprecedented wide spread abuse of government powers with multiple cross agency collaboration. The NYPD/CIA useless surveillance program of innocent people where for six years agents were paid to listen, bait and map the entire NY city Arab American community without uncovering one lead.  Undercover agents  monitored Arab Americans casual interactions at their local hookah bars, coffee shops, houses of worships and community gatherings. Logging thousands of man-hours and thousands of pages with absolutely nothing worth their time– while senselessly wasting millions of dollars that would have been better spent addressing the burgeoning number of NY City homeless families and children. Most disturbing under the Obama administration the department of Justice has been busy collecting and illegally storing intelligence information on American citizens’ political and religious beliefs, which is a clear breach of US constitutional protections.

Mindful of these facts, Arab Americans also recognized that during the 2012 campaign President Obama expressed his position on a number of national issues slightly better than Mitt Romney. They overwhelmingly supported his health care reforms, proposal to end outsourcing American jobs, and support US troops withdrawal from Afghanistan in 2014. They voted for President Obama giving him a last opportunity to fulfill his vision of hope and change that his administration has yet to articulate.

Arab Americans concerns of the Obama’s first term are legitimate and are not limited to their own community. Many Americans are voicing alarm with the erosion of our civil liberties, constitutional and religious rights. Whether Arab American or not these concerns are central to America’s core beliefs, democratic values and the unity and discourse of our nation.

Aware that Obama may not deliver in his second term Arab Americans reached out to their local community.  They mobilized and built coalition with progressive Americans and the interfaith community to defeat fear-mongering candidates. Identifying common interests they built local support, informed and educated and coalesced around shared objectives.  Their bet and belief in their American neighbors, friends and community paid off helping defeat Islamophobic hate mongering candidates.

The 2012 Presidential elections saw Arab Americans political maturation. Understanding that small minorities can become critical blocks of voters in key states. Banded together in every battle ground state they gave President Obama a second chance and the Democratic Party a decisive edge in the Senate. Their vote deserves recognition – but will it be recognized? Time will tell.

Locally Arab Americans understood that their fight is America’s fight and the onslaught on their liberties, privacy is an attack on America’s constitutional guarantees. They enlarged their circle and built  local coalitions with conscience Americans who share their inclusive American vision and are equally concerned with the use of hate, divisiveness and fear to advance narrow political agendas. Together they managed to deal a major blow to hate peddling politicians. Meanwhile they are still hopeful that Obama may come through in his second term and along the way managed to curtail the spread of the hate and fear politics in their own back yard.