Palestinians Chart Own Path to Self Determination 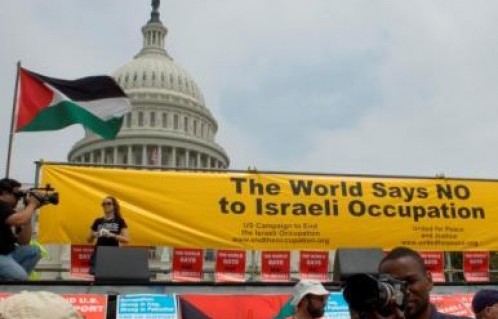 After decades of countless US failed attempts to bring about a negotiated settlement for an independent State of Palestine, the Palestinians have come to realize that they must proactively plan and chart their own path to freedom and self determination.

Despite our government’s insistence that we remain the lead broker and facilitator to past, present and future negotiations the US has failed to deliver. For more than forty years of US active political involvement we have failed to exert the political will, vision or produce any meaningful solution to the Palestinian Israeli conflict. This diplomatic and costly failure is ours to bear and rests on the shoulders of the US Congress, White House and State Department.

The reasons for our government’s failure are complex, but thankfully they have brought about a clear common understanding among Palestinians–as displayed by the successful Palestinian civil society Boycott, Divestment and Sanction (BDS) call and the more recent Palestinian Authority (PA) United Nations bid.

Palestinians have come to realize their destiny, rests in their hands. They recognize that continued negotiations are preserving the status quo and the continuation of Israel’s military occupation of Palestinian land, is sustaining Israel’s settlement expansion and the forced displacement of Palestinians from their homes and lands in East Jerusalem and the West Bank.

Meanwhile US supported and funded Israel has enabled one Israeli government after another to advance and administer a military occupation and settlement policies that suffocate and isolate Palestinians within and across the West Bank, East Jerusalem and Gaza, through a set of contrived structures, political and military apparatus too numerous to count.

Palestinian civil society leaders were first to proactively articulate a concrete strategic plan to end the Israeli military occupation. In July 2005, Palestinian civil society launched a “call to international civil society organizations and people of conscience all over the world to impose broad boycotts and implement divestment initiatives against Israel, similar to those applied to South Africa in the apartheid era, until Israel meets its obligation to recognize the Palestinian people’s inalienable right to self-determination and fully complies with international law.”

In less than 6 years the Palestinian lead BDS non-violent call has successfully established a global movement that is building a consensus of world public support for Palestinian national aspirations. Guided by the principals set by the Universal Declaration of Human Rights, the Geneva Convention, UN resolutions and the International Court of Justice, BDS has become recognized as a legitimate tool for state and corporate ethical accountability. BDS is creating concrete peaceful strategies and tools that are implemented and advanced by believers and non believers, Christians, Muslims and Jews, human rights groups, unions and member states. Today BDS actions are implemented in every continent and country including the US

Meanwhile for more than a decade it has become crystal clear that US led peace negotiations will likely fail for the foreseeable future unless other political tools are employed to help spur a different political paradigm. Despite this reality the PA continued futile attempts to resolve the conflict through US brokered negotiations in spite of the uselessness of the negotiation process imposed by both Israel and the US- who often spoke in one voice. The last nail that sealed the fate of the prospects of a negotiated settlement between the Palestinians and Israelis was evident during president Obama’s first year in office.

Obama publicly stated and outlined the US strategic interests in ending the conflict through a negotiated settlement based on a two state solution- a Palestinian State and an Israeli State. For 21 months Obama launched an extensive diplomatic effort to resume Palestinian Israeli negotiations deploying a cadre of diplomats and one condition- for Israel to “freeze” its settlement building.

Obama’s efforts resulted in the shortest ever bi- lateral talks (less than one month) and subsequently the resignation of his Middle-East envoy George Mitchell. Within few months US political impotence was publicly demonstrated as Obama publicly U-turned from his one condition, while Israel blatantly continued its settlement-building activities. As a last resort on September 15th the PA will seek to establish an independent sovereign Palestinian state as stipulated by international law and United Nations General Assembly Resolutions 181 and 393 “based on the internationally recognized borders of 1967, with mutually agreed upon modifications”.

As expected the US and Israel are strongly denouncing both the BDS movement and the PA’s UN bid and are expanding extensive political capital to defeat both Palestinian initiatives. The global BDS movement is thriving and growing, and so far the PA has managed to receive the endorsement of 122 nations and counting.

Meanwhile the Palestinians are in deep and continuous dialogue of the benefits or pitfalls of the PA’s UN bid. Notwithstanding the disagreement that surrounds the PA’s UN bid especially with regard to what the bid omits, or actually and tangibly achieves on the ground – it, nonetheless has initiated a Palestinian conversation on the merits of the PA bid, helped the PA augment and improve its bid, while still many may find the improvements still lacking.

What has recently become evident is the evolution of the Palestinian leadership and the role it plays in shaping its future and national aspirations. Visibly Palestinians are concretely devising and employing political options and long-term national strategies that are organically based on Palestinian political objectives and goals. Today, Palestinians are implementing proactive, tangible, and specific political strategies that are authentically Palestinian lead and envisioned. Meanwhile they are actively building and establishing practical and well- articulated political tools that are effectively changing the Palestinian political landscape and engaging and engendering the support of many within the international community.

Most critically, Palestinians are shedding the old political paradigm that was based on political groupings and personalities that do not reflect current Palestinian realities, and are evolving into becoming strategic political planners with clear agendas, and well -defined long term national plans that are reflective of their own interests, national aspirations and needs.

They are finally free to chart their own destiny and are no longer bound by short term reactive solutions that depend on outside influences, or limited to the negotiating perimeters set by the US and Israel.