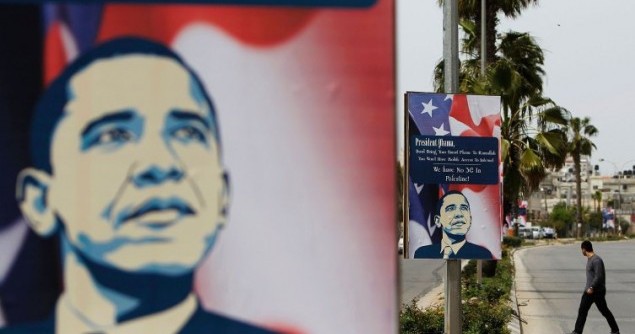 Despite some fanfare over President Barack Obama’s upcoming three-hour visit to Ramallah during his three-day long trip to Israel, Palestinians in the de facto capital of the West Bank are for the most part nonplussed with the diplomatic tour.

Last week I asked Palestinians who live and work in Ramallah what they think about the upcoming visit and their responses ranged from blasé to outright disappointment. While the president has seemingly added Ramallah to his itinerary as a good will gesture, the Palestinians I spoke with felt the Presdent’s decision to only meet with political leadership during his very short visit was not enough.

In fact all the four respondents rebuked the notion that President Obama has an interest in the well being of the Palestinian people. All of them stated that his policies already indicate Israel is the U.S.’s ally in the region.

Nadia, 29, works at an investment bank:

“I am very disappointed!

Palestinians were very strong supporters for President Obama when he was first elected. We are very optimistic in particular when he promised that he would work hard to make sure that Palestinians get an independent state. However, he did not keep his promise, and his visit to Israel reflects his strong support to the Israel with no consideration to Palestinian suffering. His visit has nothing to do with finding a solution to the conflict, I believe he is visiting as a tourist and his visit schedule reflects this fact! I was hoping that he would be a bit more neutral towards the conflict but this visit shows that he is standing on the Israeli side! Despite all the Israeli violations, ongoing occupation, illegal settlement activity, aggression against Palestinian people, President Obama is sending a clear message that Israel is a friend and ally, and Palestinians are the last thing on his agenda! I am asking President Obama to reconsider his position, to listen to us, to our suffering, concerns and dreams. I am asking him to visit Palestine, to visit refugee camps, to meet youth and women! I am asking him to help us make our dream come true; end the occupation and build a civilized, liberal, independent Palestine! I am asking him to put real pressure on the Israeli government to stop its violations against us!”

Jumana, 30, development assistant, member of Palestinians for Dignity who are expected to organize a demonstration during President Obama’s West Bank visit:

“We don’t expect anything good happening from Obama’s visit to occupied Palestine. Obama has wholeheartedly expressed his strong commitment to the security of Israel. In fact the US successive administrations have not been honest brokers for peace in the Middle East. The Oslo peace process which was signed 20 years ago have brought nothing to the Palestinians but more prisoners, more illegal Israeli settlers, whose numbers have increased to more than twice as many as 200,000 settling in the occupied Palestinian territories. The U.S. Congress has pledged $3.1 billion in military aid to Israel for the year 2013 alone including to financing the Iron Dome system.

Obama’s visit comes at a time when Palestinian prisoners are waging a hunger strike for freedom and dignity, however he aims to relieve the pressure on Israel at this moment and to pander to the current Israeli government, which is suffering some international and diplomatic isolation. This visit also aims to prolong the life of the Palestinian Authority, which is becoming more disconnected from its people after 20 years of the futile negotiations and Oslo agreement. We therefore call for supporting the boycott of Israel in the security, economically, politically, culturally, and academically.”

Noticeably a few of the respondents mentioned the on-going Palestinian prisoner hunger strike movement inside of Israeli prisons. Since last fall when the Palestinian Authority’s (PA) gained non-member observer status at the United Nations, protests have mounted against the civil administration—sometimes over the hunger strikers. There are currently twelve long-term detainees fasting against Israeli imprisonment. Their call for Palestinians to join them and demonstrate has been well received across the West Bank. So while on a diplomatic level the PA is discussing returning to direct negotiations with Israel, albeit with a settlement freeze, Palestinians on the ground from the cities to small villages are in a period of increased organized dissent.

“What are you doing in Palestine Obama? What do you want? I wish America could help make peace with Israel. I wish that you knew Palestinian are being killed—our children and women. We hope that you can help us, help Palestine get rid of the apartheid wall, and checkpoints. And finally we wish to free Jerusalem so it may be the Palestinian capital. But we know that you are supporting Israel. And so we say to you welcome, and freedom to all prisoners in the Israeli jails.”

“It’s pointless. It reminds me of a story of a man who went to a rabbi to complain about his living situation. The rabbi had the man bring all the animals he owned into his house. Then when his life got worse, the rabbi told the man to take out the animals one by one. After all of the animals were back to their outdoor enclosures the man was happy. But at the end of the story, nothing has really changed for this man’s life.

This is very similar to our situation. People come and go but nothing really changes. It’s just keeping up appearances.”

The gap between the political aspirations of the leadership versus the people will likely erupt in demonstrations during President Obama’s trip to Ramallah. The tensions on the ground with both the PA and Israel can certainly be felt in these comments from Ramallah.