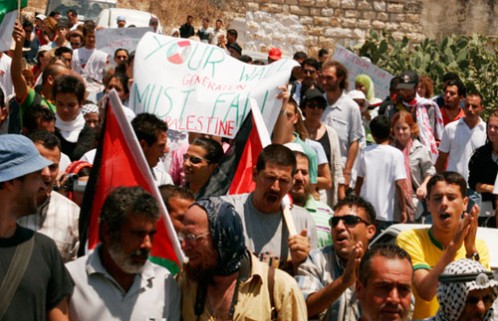 With all eyes on the upcoming United Nations General Assembly meeting in September when 191 UN member states will vote on whether or not to recognise a Palestinian state, it is surprising that there is barely any mention of what may be one of the most significant developments within Palestinian society in recent times.

Beneath the radar, the Palestinian National Authority (PNA) is successfully promoting the notion that popular resistance through nonviolent methods is the preferred means to advance the Palestinian cause and achieve the final goal of ending the occupation and establishing the Palestinian state. In turn, Palestinian public opinion in the West Bank is shifting radically by embracing nonviolent resistance as popular and legitimate.

Palestinian nonviolent resistance can be traced back to the 1970s and the first intifada, or uprising. The principles of nonviolence are now taking firm hold in the collective Palestinian psyche as expressed in my recent discussions with Palestinian residents and by Palestinians in official positions, such as Prime Minister Salam Fayyad.

This trend stems from a growing appreciation that the promotion of internal Palestinian security and calm is firmly linked to security for Israelis. What this translates to on the ground is that the lull in attacks against Israelis of the past few years is now perceived to serve the Palestinian national cause. This perceptual shift is perhaps the biggest achievement of the PNA’s state-building plan, which envisages the creation of an independent and sovereign Palestine by late 2011.

So how did this change in the security posture come about? Understanding the perversity of the security condition set by the US-backed peace proposal “Road Map for Peace”, whereby the Palestinian government must provide Israel – the occupying power – with security, Fayyad cleverly linked security with freedom.

Fayyad internalised Israel’s need for security as first and foremost a Palestinian need. The idea behind the switch is derived in part from the belief that Palestinians are ultimately responsible for their own destiny. So while part of the PNA’s state building plan is strengthening the economy, reforming the security sector, and creating transparent and accountable state institutions, an even bigger part is dedicated to transforming the minds of Palestinian residents living in the West Bank by impressing upon them the idea that violent resistance completely undermines their right to self-determination.

Institutionalising the new security position within both state and society included the implementation of a series of security measures in the West Bank, such as the training of new national security forces, dismantling illegal militias, jailing Hamas members for crimes of aggression and money laundering, and focusing on the overall safety of Palestinian citizens.

In addition, the PNA implemented two measures, demonstrating the commitment of the current government to building a democratic and viable state: giving a large role to civil society organisations to assist in the direction and implementation of the security measures, and recruiting former militants into the security apparatus.

To several international observers some of these measures come at the expense of democracy by arbitrarily detaining those sympathetic to Hamas. Nonetheless, most of the measures have been remarkably successful in returning the rule of law to the West Bank and providing Palestinians with a relative sense of normalcy and genuine hope for the future.

Israelis must come to understand that when a person has something to lose, they will work hard to maintain it. The importance of Israeli society recognising this process within Palestinian society is crucial for this to work.

Ghaith al-Omari, a former foreign policy adviser to Palestinian President Mahmoud Abbas, once said that the challenge for Fayyad and Abbas is that “for many Palestinians violence against Israel is a nationalist, respectable endeavour.” While that may have been true in the past, the present situation certainly paints a different picture. Hopefully by coming to the realisation that one cannot sustain security by force alone, Israelis will look more favourably toward the Palestinian state-building project.

Natalia Simanovsky is a former research officer with the Macro Centre for Political Economics.