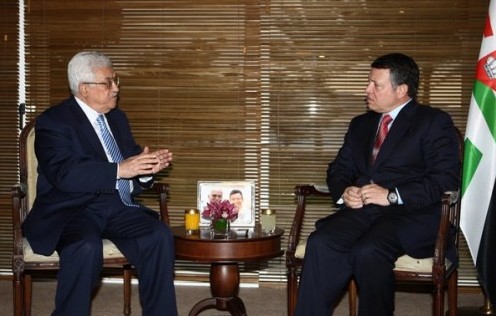 That doesn’t happen too often does it? It’s only the King’s third visit to the West Bank in his 12 years as sovereign.

Why does Abbas need such visible support at this particular moment?  He’s set to open power-sharing talks with Khaled Mashaal of Hamas.  The elections of 2007 left Hamas in charge of Gaza while Fatah retained control over the West Bank leaving the Palestinian people with two very different sets of leaders.

But King Abdullah is in need of a bit of pepping up too? Yes, Mashaal is also going to pay an official visit to Jordan which will be his first official engagement there since Hamas was expelled 12 years ago.

So having tried to ignore Hamas for quite some time Abbas and King Abdullah have decided to hold their noses and begin engaging with them. Quite a turnaround. Why now?  You could say it’s straightforward, pragmatic politics.  Events over the past ten months throughout the Arab world have demonstrated that Islamist movements are a force to be reckoned with and their influence is only set to grow.  Better to start talking asap.

And when do the talks between Abbas and Meshaal begin? Later this week in Cairo assuming they can both negotiate the mayhem that’s engulfing the city.