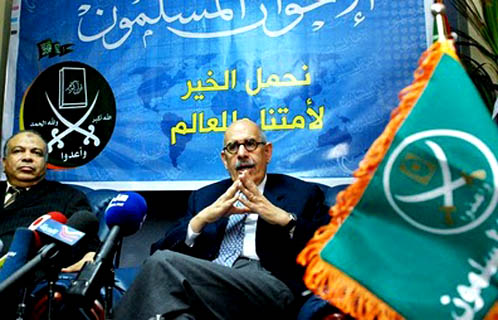 The governments of the Arab Gulf states have been sceptical of the Arab Spring. For many political observers this scepticism stemmed from the fact that most of these states enjoyed strong personal and political relations with the presidents of Egypt, Yemen and Syria.

Others contend that commercial ties and finance were behind this support while another group opined that losing the support of Arab republican regime allies could mean a gain for Iran. There may yet be another reason behind the scepticism displayed by the Arab Gulf monarchies, that of the possible resurgence of a new threat in the form of the Muslim Brotherhood movement in their own backyard.

Among the countries where this threat is believed to exist is the United Arab Emirates, as recent developments have indicated. In March this year, 133 UAE academics, journalists and civil society activists signed a petition addressed to the UAE president calling for an elected parliament with legislative powers.

UAE national observers commented in private that this petition that was signed by individuals was most likely going to be stillborn as a number of those whose names appears on the list are suspected of being members of the UAE branch of the Muslim Brotherhood.

The logic went that should the UAE government acknowledge the demands of a petition that included these individuals it would automatically be acknowledging and conferring legitimacy on the demands of elements of the Muslim Brotherhood.

In the following weeks, up to five activists including Ahmad Mansour, an engineer and blogger who serves on Human Rights Watch’s Middle East advisory committee, as well as Dr Nasser Bin Gaith, a university lecturer whose articles appear on an Islamic leaning portal, were arrested and charges were brought against them.

The London registered portal Middle East Online published comments from an unnamed source at the UAE Jurist Union whose board was dissolved and replaced by government appointees.

The source told Middle East Online that a number of Jurist Association members including its chairman, banned from writing in local newspapers, vice-chair and a board member were ‘known Muslim Brotherhood members’ and that the union members refused to keep them as representatives.

Social media such as Facebook played a part in the debate on Muslim Brotherhood in the UAE although it was absent from the official UAE newspapers. The prominent UAE political science professor Dr Abdul Khaleq Abdullah tweeted in early May, “The Muslim Brotherhood is a huge concern to the UAE leaders and I am afraid it is going to get worse in the days to come.”

A study conducted by the Dubai-based Al Mesbar Studies & Research Centre highlights a meeting that took place in 2003 between senior UAE leaders and the Muslim Brotherhood in the UAE. According to the report the group reneged on a promise to dissolve itself after an initial agreement to do so thereby ‘missing an historic opportunity to mend ties with the government.’

Details of the January 25 Egyptian revolution might play a bigger role than we might expect in the re-emergence of the group in the Gulf and the suspicions surrounding it. Over the past few weeks it has become evident that one of the biggest gainers in the Egyptian revolution is the Muslim Brotherhood.

During the initial stages of the revolt against the regime of former president Hosni Mubarak, the Ikhwan as they are known, were careful not to make their presence visible and slogans such as ‘Islam is the solution’ were absent from Tahrir square. This was due to them not wanting the revolution to be labelled Islamist. Therefore a marriage of convenience took place and for a few short weeks Muslim Brotherhood members stood side by side with moderate Muslims, Coptic Christians, liberals and socialists.

Following the successful deposing of the Mubarak regime, the Muslim Brotherhood witnessed a resurgence in Egypt where the movement was founded 83 years ago. After decades of being denied legitimacy, the Ikhwan have now formed a political party known as the Freedom and Justice Party and announced that they will contest up to 50 per cent of the seats in parliament although they have said that they will not seek a majority in parliament.

What Gulf governments fear is that the petitions signed by a cross-section of the community that call for change and reform, are similar attempts by Gulf Muslim Brotherhood elements to seek regime change, by entering a temporary marriage of convenience with liberals and moderates, as was the case in Egypt.

These alliances would then also be broken once the group feels empowered enough and able to stand on its own. This would explain the reasoning behind finding recognised liberal Emirati thinkers and academics on the petition side-by-side with members of the UAE Muslim Brotherhood.

There is no doubt that Gulf Muslim Brotherhood members feel emboldened by the recent developments, especially in Egypt. Islamic groups across the region are witnessing their own spring. Where they were suppressed previously, they are now gaining more and more power.

From the moderate Ennahda party in Tunisia led by the charismatic Rachid Gannouchi who likens his party to the ruling AKP in Turkey, to groups in the kingdom of Jordan that enjoy strong ties with the Gulf states and is also witnessing an emboldening of Muslim Brotherhood rhetoric.

The group’s leader in Jordan intensified activity on the streets, which included calls for a transformation into a constitutional monarchy and was crowned with a meeting with King Abdullah of Jordan in February. A meeting that would certainly draw some concerns in the ruling circles of fellow monarchies in the Gulf.

However, the Muslim Brotherhood is not likely to succeed in penetrating Saudi Arabia, what is perhaps their endgame, due to the internal dynamics of the kingdom. The ruling elite enjoys a strong relationship with the clerical establishment from which it draws legitimacy.

This relationship has only been strengthened in the course of the Arab Spring when a significant portion of the $130 billion (Dh477 billion) benefits package that the Saudi King announced over the past few months was directed towards appeasing the clerics.

Amongst them was the building of new regional headquarters for the Committee for the Promotion of Virtue and Prevention of Vice and generous financial benefits. But perhaps most significant was a new media law that bans publishing material that damages the reputation of these senior clerics who have in turn issued fatwas against any political petitions.

Although the most advanced politically, Kuwait’s parliamentary laws don’t allow political parties to be formed, however, loose political blocs carry equally significant clout. Despite not being referred to officially as Muslim Brotherhood, the Kuwaiti branch of the Ikhwan is the most entrenched in the Gulf in terms of political legitimacy, making it a possible outpost to oversee the group’s activities in the Gulf.

The Muslim Brotherhood bloc in Kuwait’s National Assembly includes the MPs Jamaan Al Harbash and Abdul Aziz Al Shayji, who were behind the second public questioning demands of the current Prime Minister according to the London-based Saudi-owned Asharq Al Awsat newspaper.

The MPs are part of a bloc known as the Islamic Constitutional Movement, formed after the liberation of Kuwait, although an Islamic movement is believed to have started three decades earlier following Kuwait’s independence.

The Muslim Brotherhood has displayed a sharp ability to organise and form community support initiatives in countries where there is significant poverty such as Egypt and Jordan, and in the Gaza Strip. They are at a disadvantage though in that regard in the Gulf states, since the wealthy monarchies are able to use the increasing oil income to provide generous services and financial benefits to their citizens.

Muslim Brotherhood members in the Gulf states unlike in other parts of the Arab world do not announce their affiliation to the group publicly. They also completely avoid using the word Ikhwan in their literature along with the recognisable symbol of a green circle featuring two crossed swords with a Quran on top and the word ‘prepare (yourselves)’ underneath. Instead the Gulf branches of Muslim Brotherhood mostly use the neutral Arabic word Islah, which means reform or repair, in their registration documents, names and slogans.

In a classic staring contest dilemma, both the Gulf governments and the Gulf Muslim Brotherhood wait for the other party to blink first and finally utter the term Ikhwan. On the one hand, an official state accusation of the suspected members of foreign political affiliation would result in a flat out denial citing popular causes such as reform.

On the other, the Gulf Muslim Brotherhood members would risk a community backlash if their ties to organised foreign groups were exposed due to the fact that members pledge allegiance to a supranational entity rather than to fellow citizens and the country. In the midst of this staring contest it is the Gulf citizens who are left seeking clarity.

This aversion to going public in the Arabian Peninsula, the cradle of Islam, is partly due to them wanting to avoid a government crackdown. It may also be because of the lack of support that these groups believe they command in society at large.

The Gulf states today will likely have to alter their strategies of dealing with the Muslim Brotherhood movement ‘threat’ from individual and local level strategies to possible Gulf-wide collaboration as a result of the recent developments in the region.

In the meantime, perhaps by continuing to proceed with reforms and citizen empowerment in a gradual but sustainable pace, the Gulf states can deny the Muslim Brotherhood the opportunity to claim to carry the mantle of legitimate public empowerment and reform.

There may be a risk that alienating such individuals may result in further radicalisation of their beliefs. It is precisely because Muslim Brotherhood members are vigilant about their identities that the Gulf states must be wary about handling such a delicate issue.

No doubt the Gulf governments find themselves in a conundrum where on one side there exist legitimate popular demands for reform and public empowerment, and on the other the threat of a radicalised movement that after decades of obscurity is finally gaining legitimacy through pragmatic tactics.

Should the Gulf states delay reform until the threat of the Muslim Brotherhood subsides? Or should they proceed with the full knowledge and confidence that the tolerant and aware citizens of the Gulf will not allow themselves to fall prey to imported ideology no matter how tactful and pragmatic it is?

It is also likely that should the Muslim Brotherhood in Egypt gain a significant portion of parliamentary seats and begin imposing their ideology through reversing economic and political liberalisation and female empowerment, the Egyptians, a tolerant and empowered people, will themselves reject the movement sooner or later.

Sultan Sooud Al Qassemi is a non-resident fellow at the Dubai School of Government. You can follow him at www.twitter.com/SultanAlQassemi. This article was first published in UAE daily, Gulf News.