Libyan Chaos: The Colourful Life and Times of Khalifa Hifter 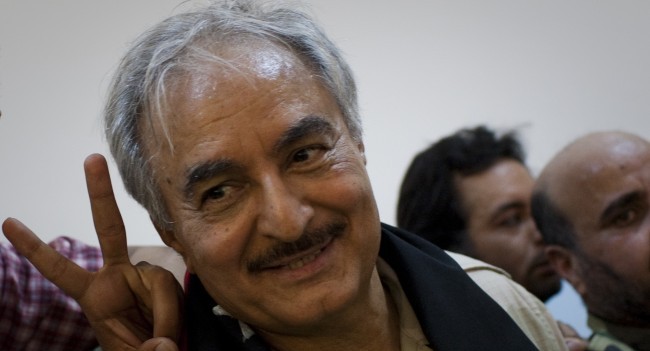 On Friday, Feb 14, 92 prisoners escaped from their prison in the Libyan town of Zliten. 19 of them were eventually recaptured, two of whom were wounded in clashes with the guards. It was just another daily episode highlighting the utter chaos which has engulfed Libya since the overthrow of Muammar Ghaddafi in 2011.

Much of this is often reported with clichéd explanations as in the country’s ‘security vacuum’, or Libya’s lack of a true national identity. Indeed, tribe and region seem to supersede any other affiliation, but it is hardly that simple.

On that same Friday, Feb 14, Maj. Gen. Khalifa Hifter announced a coup in Libya. “The national command of the Libyan Army is declaring a movement for a new road map” (to rescue the country), Hifter declared through a video post. Oddly enough, little followed by way of a major military deployment in any part of the country. The country’s Prime Minister Ali Zeidan described the attempted coup as “ridiculous”.

Others in the military called it a “lie.” One of those who attended a meeting with Hifter prior to the announcement told Al Jazeera that they simply attempted to enforce the national agenda of bringing order, not staging a coup.

Hifter’s efforts were a farce. It generated nothing but more attention to Libya’s fractious reality, following NATO’s war, branded a humanitarian intervention to prevent imminent massacres in Benghazi and elsewhere. “Libya is stable,” Zeidan told Reuters. “(The parliament) is doing its work, and so is the government.”

But Zedian is not correct. His assessment is a clear contradiction to reality, where hundreds of militias rule the country with an iron fist. In fact, the prime minister was himself kidnapped by one militia last October. Hours later, he was released by another militia. Although both, like the rest of the militias, are operating outside government confines, many are directly or loosely affiliated with government officials. In Libya, to have sway over a militia is to have influence over local, regional or national agendas. Unfortunate as it may be, this is the ‘new Libya.’

Some will find most convenient ways to explain the chaos: ‘East Libya is inherently unruly’, some would say; ‘it took a strong leader like Ghaddafi to maintain the national cohesion of a country made of tribes, not citizens,’ others would opine. But the truth is oftentimes inconvenient and requires more than mere platitudes.

Libya is in a state of chaos, not because of some intrinsic tendency to shun order. Libyans, like people all over the world, seek security and stability in their lives. However, other parties, Arab and western, are desperate to ensure that the ‘new Libya’ is consistent with their own interests, even if such interests are obtained at the expense of millions of people.

The New York Times’ David Kirkpatrick reported on the coup from Cairo. In his report, “In Libya, a Coup. Or Perhaps Not,” he drew similarities between Libya and Egypt; in the case of Egypt, the military succeeded in consolidating its powers starting on July 3, whereas in Libya a strong military institution never existed in the first place, even during Ghaddafi’s rule. In order for Hifter to stage a coup, he would need to rely on more than a weak and splintered military.

Nonetheless, it is quite interesting that the NYT chose to place Hifter’s ‘ridiculous’ coup within an Egyptian context, while there is a more immediate and far more relevant context at hand, one of which the newspaper and its veteran correspondents should know very well. It is no secret that Hifter has had strong backing from the US Central Intelligence Agency (CIA) for nearly three decades.

The man has been branded and rebranded throughout his colorful and sometimes mysterious history more times than one can summarize in a single article. He fought as an officer in the Chadian-Libyan conflict, and was captured alongside his entire unit of 600 men. During his time in prison, Chad experienced a regime change (both regimes were backed by French and US intelligence) and Hifter and his men were released per US request to another African country, then a third. While some chose to return home, others knew well what would await them in Libya, for reasons explained by the Times on May 17, 1991.

“For two years, United States officials have been shopping around for a home for about 350 Libyan soldiers who cannot return to their country because American intelligence officials had mobilized them into a commando force to overthrow Col. Muammar el-Qaddafi, the Libyan leader,” NYT reported. “Now, the Administration has given up trying to find another country that will accept the Libyans and has decided to bring them to the United States.”

Hifter was then relocated to a Virginia suburb in the early 1990’s and settled there. The news is murky about his exact activities living near Washington D.C., except for his ties to Libyan opposition forces, which of course, operated within a US agenda.

In his thorough report, published in the Business Insider, Russ Baker traced much of Hifter’s activities since his split from Ghaddafi and adoption by the CIA. “A Congressional Research Service report of December 1996 named Hifter as the head of the NFSL’s military wing, the Libyan National Army. After he joined the exile group, the CRS report added, Hifter began ‘preparing an army to march on Libya’. The NFSL, the CSR said, is in exile ‘with many of its members in the United States.”

It took nearly 15 years for Hifter to march on Libya. It also took a massive war that was purported to support a popular uprising. Hifter, as Baker described, is the Libyan equivalent of Iraq’s Ahmed Chalabi, a discredited figure with strong allies in Washington D.C. Chalabi was sent to post-Saddam Iraq to lead the ‘democratization’ process. Instead, he helped set the stage of the calamity underway in that Arab country.

It is no wonder why Hifter’s return was a major source of controversy. Since the news of his CIA affiliation was no big secret, his return to Libya to join the rebels in March caused much confusion. Almost immediately, he was announced by a military spokesman as the rebels’ new commander, only for the announcement to be dismissed by the National Transitional Council as false. The NTC was largely a composition of mysterious characters that had little presence within Libya’s national consciousness. Hifter found himself as the third man in the military ladder, which he accepted but apparently grudgingly so.

Despite the coup failure, Libya will subsist on uncertainty. Arab and Western media speak of illegal shipments of weapons arriving into various Libyan airports. The militias are growing in size. The central government is growing irrelevant. Jail breaks are reported regularly. And Libyans find safety in holding on tighter to their tribal and clan affiliations. What future awaits Libya is hard to predict, but with western and Arab intelligence fingerprints found all over the Libyan bedlam, the future is uninviting.