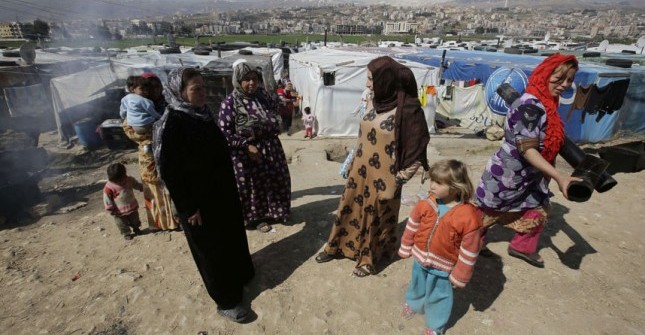 One of the greatest tragedies of the Syria war – other than the hundreds of thousands of Syrians killed, maimed, disappeared, detained and tortured, the economy’s collapse and the destruction of between 60 and 70 percent of the country — is the growing numbers of refugees and internally displaced persons (IDPs).

More heartrending is the fact the figures will keep growing.

Already, over 1.6 million people have little prospect of going back to their Syrian homes in the foreseeable future.

One way or another, being a refugee will affect them for the rest of their life — ask any Palestinian, 65 years on…

According to UNHCR, one million Syrians took refuge in Lebanon, Jordan, Turkey, Iraq and Egypt in the six months since December 2012.

“With little prospect of being able to safely return to their homes in the short term and growing hardship in host countries, Syrians face desperate circumstances. At the same time, the governments of the region hosting Syrian refugees and the humanitarian community face an increasingly challenging and complex humanitarian crisis which, beyond refugees’ immediate protection and assistance needs, threatens the balance of the entire region,” UNHCR says.

Apart from the 1.6 million people who fled to neighboring countries, some 4.25 million are believed to be displaced within Syria and many more are affected by the war.

What is so baffling, considering the figures, is the apathy of the key international players, chiefly the United States and the European Union countries.

Based on arrival trends since the beginning of the year, UNHCR estimates the number of Syrian refugees in need of assistance across the region may reach 3.45 million by year-end 2013. They will be hosted in camps and, for the most part, in local communities.

In an effort to grapple with what might become the largest refugee crisis ever, the United Nations is asking for a record-breaking $5.1 billion in humanitarian aid for Syria and neighboring host countries.

Each refugee has a tale of horror to cope and live with forevermore.

With the help of British charity Syria Relief, a group of women in a Syrian refugee camp in Jordan is coping by sewing and cooking in a DIY workshop.

Each of the women at the workshop is as busy as a bee. Their eyes hide a thousand tales but they only have time for work – all 20 of them embroidering and cooking to support refugee families and their own.

Alarabiya TV anchor Rima Maktabi toured the camp in Jordan and met the women at their improvised workplace.

When they talk, it is mostly about recollections and the loved ones they lost or left behind.

Umm Imad seems weighed down by her 60 years. She embroiders clothing to support family and relatives. Her son was killed in Syria. After burying him, she fled to Jordan.

“They can place me in a golden castle after losing my son, but that would mean nothing to me,” she tells Maktabi. ‘I simply want to be by his side, that’s all.”

The Syrian women in the Alarabiya video cover their faces and hide their fear. Even in Jordan, they feel the need to protect their own identity in order to save from harm relatives who stayed behind in Syria.

UK-based Syria Relief tries to alleviate the Syrian refugee burden. It set up the women’s workshop to raise money from the sale of its output. The money goes to those in need.Syrian activist Samara says, “When we arrived in Jordan we discovered something called mini projects – meaning you use simple tools to produce something. We didn’t want to burden our host society.”

Numerically, this is the largest refugee crisis in the history of the modern Middle East.

In Jordan, more than 100,000 Syrians live in the teeming Zaatari refugee camp, set up in July 2012, now the second largest in the world. But the vast majority has settled in cities and towns around the country. Syrian refugees can now make up fully half the population of some northern cities.

As of mid-January 2013, the UN has registered almost 176,000 refugees in Jordan. The Jordanian government estimates 250,000 have entered the country.

In Lebanon, some 510,000 refugees already make up more than 10 percent of the population. Lebanon has elected not to build refugee camps. So the influx is straining the country’s decrepit infrastructure and overwhelming its border towns and villages.

Then there is Turkey. Nearly 400,000 refugees fled to government-funded camps early in the Syrian civil war.

According to a study by Salam Kawakibi, a Syrian political scientist based in Paris, there are some five million internally displaced Syrians within their own country. The majority can today be found in or near Damascus, Aleppo, Homs, Deir Ezzor and Idlib.

There are currently almost 70,000 refugees registered with the UNHCR in Iraq. The vast majority reside in the Kurdistan province of Duhok, mostly within Domiz camp — an autonomous region in the far north of the country.

Syria Relief, which is helping refugees with mini projects, was set up in September 2011 to provide help and support to Syrian families in need, in and outside Syria.

Syria Relief is a non-political, non-denominational, non-governmental organization, coordinates a number of charitable activities taking place in the UK to provide help and support to Syrian families and individuals in need, in Syria and outside it, irrespective of religion, geographical location, or political persuasion.

The women’s sewing and cooking will certainly help make a difference for some of the refugees around them. But they will be far from the $5.1 billion needed in humanitarian aid.

In a frightening infographic, UNHCR appeals for the $5.1 billion that will help 3.45 million refugees and 6.8 million in need inside Syria — or a total of 10 million Syrians — by putting the figure in context. The $5.1 billion apparently is less than

Will the world be up to the humanitarian aid challenge or will the Syria war go down in history as the point when humanity lost its meaning?