Democracy and Revolutions: Drawing a Line Is Not Easy 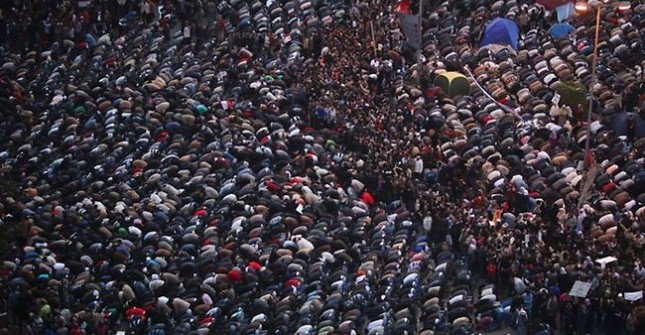 Democracy is constituted by the express and active will of real, living people, not by a box; this is especially true when these people are engaged in an on-going revolution, charting their and their nation’s future

The US government, a substantial section of mainstream Western media and the ousted Muslim Brotherhood all seem to agree: what took place in Egypt over the past few days was a military coup, a setback for the country’s alleged “transition” to democracy.

Irrespective of the variety of vested interests involved, what the three detractors of one of the most potent popular revolutionary upsurges in modern history share is contempt. Twenty-two million signatures (at nearly 50 percent of the nation’s adult population) are collected demanding the ousting of the president; the same demand is made by some 17 million people (at nearly 30 percent of the adult population) as they hit the streets throughout the country, in what has been described as the biggest demonstration in the history of mankind, and they do so against a barrage of threats and predictions warning of 30 June’s “rivers of blood,” and stay there.

Unprecedented it may be, yet not really worth seeing (the Washington Post persisted in speaking of “rival demonstrations” between Morsi supporters and the “opposition”), it is not democracy; it is the army and the “deep state.” Nothing short of the most profound sense of contempt for these very people could explain such utter blindness.

For the Muslim Brotherhood the contempt is deep-seated within a doctrine that constructs the leaders of the Gama’a as the ultimate interpreters of God’s will on earth, and as such owed blind obedience, and a lot of hand-kissing, by their “flock” – little wonder then that a rebellious Egyptian people have come to call them “sheep.”

From the Western side of the above equation – and I am still dealing here with ideological perspective rather than crass interest – it is the equally deep-seated conviction that such people as Arabs and Muslims are incapable of insisting on the sort of “liberties” that “Western Man” takes for granted.

Certainly, race has become passé, now replaced by “culture,” but what with our ostensibly inherent and immutable “Muslim” culture all we presumably can hope for is the kind of stunted and deformed “democracy” that Morsi and his tribe were offering us, never mind freedom of expression, speech, belief, assembly and protest, never mind also the frenzied power grab of Mubarak’s oligarchic and deeply authoritarian state machinery, kept fully intact but for the change of its bosses.

(In June of this year, the deposed Brotherhood president appointed in one sweep 17 new governors from among his group and its allies, a mere three months ahead of planned parliamentary elections, the better to rig them more effectively).

None of it, however, seemed to really matter, minor snags along the “transition,” since all we Arabs and Muslims could hope for and deserve is a 2 percent margin in the ballot box – that is democracy enough in terms of our “culture.”

Yet, there is another aspect to the blindness. Throughout history, popular revolutions by one people have had a tendency to inspire revolutionary upsurges by other peoples, just as Egypt’s was inspired by Tunisia’s, Libya, Yemen, Bahrain and Syria by both. For such a revolution to lead to a bungling, grimly oppressive Islamist regime, whose single claim to “democracy” is ostensibly “free and fair” elections is to drastically undercut such inspirational value. Would the Greeks find inspiration in such an outcome, or the Brazilians?

It was only on the fourth day of Egypt’s second revolution, and following intense American pressure to keep Morsi and the Muslim Brotherhood in power, that US President Barak Obama seemed to discover – all of a sudden – that democracy is not reducible to the ballot box.

Well, hey hurray! In fact, the history of democracy the world over is one where democratic liberties are won on the street, not the ballot box. Even if we set aside the founding democratic revolutions of the modern world, from Cromwell to Robespierre, via America’s founding fathers (beside which Egypt’s twin revolutions appear sparkling clean – “legitimacy” – wise), the extension of the franchise was won on the street, and so was the right of women to vote; trade unions, which were crucial in defining the very meaning of democracy and democratic liberties in today’s world, did not come out of the ballot box, but were born and evolved on shop-floors and on the street, and so has been the redefining of democracy in terms of women’s rights and liberation, well beyond the right to vote.

And last but not least Mr. Obama, need we remind you that the mere thought of running for office would not have occurred to you had it not been for the Montgomery Bus Boycott, the Greensborro Sit-Ins, the March on Washington and the hundreds of other battles, big and small, waged with tremendous sacrifice, on the streets of the self-proclaimed “greatest democracy on earth,” by a great many people, including such “legitimacy”‐unsavory characters as Malcolm X, Rap Brown, Stokely Carmichael and Angela Davis?

A very long and heroic march, full of blood and tears, put you in office Mr. Obama, and it was on the street that the heroes of these battles marched. And throughout the ballot box merely translated, almost always partially, and in stunted form, the gains won, yes, on the street.

Which seems to bring us straight back to our own erstwhile president, Dr. Morsi himself.

In his final, customarily incoherent, address to the nation, the former president (and don’t you just love the prefix “former” attached to the title of two presidents in a little over as many years) repeated the word “legitimacy” literally dozens of times. But here is a little reminder Mr. former-president, you were actually in prison when your predecessor, the “legitimate” president of the country, voted into his fourth term in what your American and other Western allies then hailed as Egypt’s first multi-candidate presidential elections, was illegitimately unseated. (There was nothing in the Egyptian Constitution then in force that allowed the president to cede his powers to something called the Supreme Council of the Armed Forces – SCAF).

We do not know the real story behind your escape from prison, whether it was the people in charge who broke you out of it, or a Hamas contingent imported especially for that purpose, as has been suggested in recent months. And frankly, I do not care. Morsi and other Muslim Brotherhood leaders were political prisoners, and in a revolution, setting political prisoners free is right and proper, even if “illegitimate.”

The thing is, of course, that since the revolution the powers that be in Egypt, hijackers all, have been juggling “revolutionary legitimacy” and formal, legal legitimacy as stipulated by the Constitution and the law of the land, willy-nilly, arbitrarily – and always in ways best tailored to suite their immediate ends. The SCAF did so, over and over again, and so did the Muslim Brotherhood.

The starkest and most flagrant example of this was the “elected” president’s flaunting of constitution, law and democratic norms, by issuing, in November 2012, a Constitutional Declaration immunising his decisions against judicial review, immunising as well that mockery of a legislative body, the consultative Shura Council (the third of which members are appointed by the president, the other two-thirds scornfully voted in by a measly 7 percent of the electorate), and vesting it meanwhile with full legislative authority, and immunising furthermore, a Constituent Assembly, which had been transformed into a closed club of the Muslim Brotherhood an its Salafi and Jihadi allies. Both these institutions had been facing imminent rulings of unconstitutionality by Egypt’s Supreme Constitutional Court.

And what was Morsi’s justification of such draconian measures which clearly aimed at perpetuating the Muslim Brotherhood’s sway over the country until such a time as humanity meets its maker? “Revolutionary legitimacy!” Well, Mr. former-president, this is exactly what is called being “hoist by your own petard,” with the added qualification that yours’ was that of a hijacker, while the people who unseated you derived their revolutionary legitimacy from a real, living revolution, historically unprecedented by virtue of 22 million signatures, by virtue of millions on the streets.