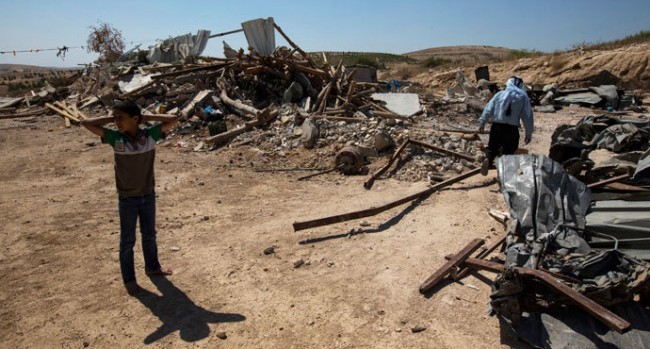 As US envoys shuttle back and forth in search of a peace formula to end the Israeli-Palestinian conflict, a matter supposedly settled decades ago is smouldering back into life.

In what was billed as a “day of rage” last month, thousands of Palestinians took to the streets to protest against a plan to uproot tens of thousands of Bedouin from their ancestral lands inside Israel, in the Negev.

The clashes were the worst between Israeli police and the country’s large Palestinian minority since the outbreak of the second intifada 13 years ago, with police using batons, stun grenades, water cannon and arrests to deter future protests.

Things are only likely to get more heated. The so-called Prawer Plan, being hurried through parliament, will authorise the destruction of more than 30 Bedouin villages, forcibly relocating the inhabitants to deprived, overcrowded townships. Built decades ago, these urban reservations languish at the bottom of every social and economic index.

Bedouin leaders, who were ignored in the plan’s drafting, say they will oppose it to the bitter end. The villages, though treated as illegal by the state, are the last places where the Bedouin cling to their land and a traditional pastoral life.

But the Israeli government is equally insistent that the Bedouin must be “concentrated” – a revealing term employed by Benny Begin, a former minister who helped to formulate the plan. In the place of the villages, a handful of Jewish towns will be erected.

The stakes are high, not least because Israel views this battle as a continuation of the 1948 war that established a Jewish state on the ruins of Palestine.

Avigdor Lieberman, the foreign minister, argued last week that the fight over the Negev proves “nothing has changed since the days of the tower and stockade” – a reference to heavily fortified outposts the Zionists aggressively built in the 1930s to evict Palestinians from the land they had farmed for centuries.

Mr Lieberman’s view reflects that of the government: “We are fighting for the lands of the Jewish people, against those who intentionally try to rob and seize them.”

The labelling of the Bedouin as “squatters” and “trespassers” reveals much about the intractability of the wider conflict – and why the Americans have no hope of ending it as long as they seek solutions that address only the injustices caused by the occupation that began in 1967.

In truth, both Israel and the Palestinians understand that the war of 1948 never really finished.

Suhad Bishara, a lawyer specialising in Israeli land issues, has called the Prawer Plan a “second nakba”, in reference to the catastrophic events of 1948 that stripped the Palestinians of their homeland.

Israel, meanwhile, continues to conceive of its 1.5 million Palestinian citizens – however peaceable – as just as alien and threatening to its interests as the Palestinians in the occupied territories. The roots of the Prawer Plan can be traced to one of Zionism’s earliest principles: “Judaisation”. There are cities across Israel, including Upper Nazareth, Karmiel and Migdal Haemek, founded as Judaisation communities next to large Palestinian populations with the official goal of “making the land Jewish”.

Judaisation’s faulty premise, in the pre-state years, was the fantasy that Palestine was “a land without a people for a people without a land”. Its sinister flip side was the cheery injunction to Zionism’s pioneers to “make the desert bloom”, chiefly by driving out Palestinians.

Nowadays, the term “Judaisation”, with its unpleasant overtones, has been discarded in favour of “development”.

There is even a minister for “developing the Negev and the Galilee” – Israel’s two areas with large concentrations of Palestinians. But officials are interested only in Jewish development.

Last week, in the wake of the clashes, the Israeli Haaretz daily published leaked documents showing that the World Zionist Organisation – an unofficial arm of the government – has been quietly reviving the Judaisation programme in the Galilee.

In an effort to bring another 100,000 Jews to the region, several new towns are to be built, for Jews only, dispersed as widely as possible in contravention of Israel’s own national master plan, which requires denser building inside existing communities to protect scarce land resources.

All this generosity towards Israel’s Jewish population is at the expense of the country’s Palestinian citizens. They have not been allowed a single new community since Israel’s founding more than six decades ago. And the new Jewish towns, as Arab mayors complained last week, are being built intentionally to box them in.

For officials, the renewed Judaisation drive is about asserting “Israeli sovereignty” and “strengthening our hold” over the Galilee, as if the current inhabitants – Israeli citizens who are Palestinian – were a group of hostile foreigners. Haaretz more honestly characterised the policy as “racism”.

Judaisation casts the conflict between Israelis and Palestinians in zero-sum terms, and thereby makes it unresolvable. In considering its Palestinian citizens, Israel speaks not of integration, or even assimilation, but of their enduring status as a “fifth column” and the Jewish state’s “Achilles heel”.

That is because, were principles of justice and equality ever to be enforced, Palestinians in Israel could serve as a gateway by which millions of exiled Palestinians might find their way back home.

With the policy of Judaisation revoked, the Palestinian minority could end the conflict without violence simply by pulling down the scaffolding of racist laws that have blocked any return for the Palestinians since their expulsion 65 years ago.

This is why Israeli prime minister Benjamin Netanyahu demands as part of the current peace negotiations that the Palestinians sanctify the Judaisation principle by recognising Israel as a Jewish state. It is also why the talks are doomed to failure.