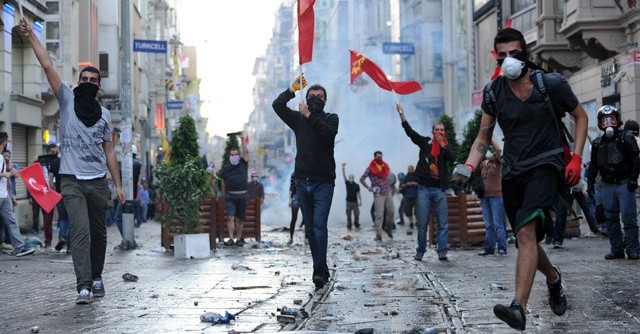 If there is one lesson Turkish Prime Minister Recep Tayyip Erdogan should have drawn from the popular revolts that toppled four Arab leaders and sparked civil war in Syria in the last two years, it is that police brutality strengthens protesters’ resolve and particualrly that of militant, street battle-hardened soccer fans.

As police on Friday unleashed tear gas and water cannons on demonstrators opposed to the planned destruction of a historic park on Istanbul’s Taksim Square, thousands of fans from rival clubs, united for the first time in decades, arrived to protect the protesters and raise morale.

In a replay of events on Cairo’s Tahrir Square that toppled Egyptian president Hosni Mubarak, thousands of fans took up positions, erected barricades, counterattacked the police and threw tear gas cannisters straight back into the ranks of law enforcement.

“It was a critical moment. Supporters of all the big teams united for the first time against police violence. They were more experienced than the protesters, they fight them regulalrly. Their entry raised the protesters’ morale and they played a leading role,” Bagis Erten, a sports reporter for Eurosport Turkey and NTVSpor said.

To be sure, Turkey is not Egypt, Taksim is not Tahrir, at least not yet, and Mr. Erdogan’s Islamist Justice and Development Party (AKP) is not the Muslim Brotherhood. Turkey unlike Egypt has long been a pluralistic society, albeit with warts, and had a tradition of protest. Whether Taksim turns into Tahrir is as much dependent on the protesters’ ability to persevere and on whether Mr. Erdogan maintains his defiant stance or listens to criticism that is widespread rather than continueing to bank on the fact that he retains a massive base of popular support among conservative segments of Turkish society.

What started out as an effort to save trees has mushroomed into the most serious challenge to Mr. Erdogan’s decade in government that intially was marked by serious democratic reform, significant economic growth and Turkey’s emergence as a regional powerhouse. Mr. Erdogan is Turkey’s first prime minister in decades to have swept three elections with enough votes to form a one-party government.

Yet Turkey outranks countries like China, Iran and Eritrea in the number of journalists it has incarcerated. And while the gap between secular and conservative segments of society initially narrowed under his rule, Mr. Erdogan’s more recent hubris and haughtiness coupled with Islamist-tinted measures has renewed secular suspicion of his true intentions.

That suspicion together with excessive police force is what drives the mushrooming protest in a society that is more or less split between secularists and conservatives. Some secularists wonder whether the police intervention in Gezi Park does not have roots that go back to 1909 when that location was where under the Ottomans the Young Turks defeated the Hunter Brigades who were calling for the introduction of Islamic law.

What is emerging is that there are four apparent parties to the current crisis in Turkey: the secularists, Mr. Erdogan’s Islamists, the police and the military. Mr. Erdogan’s Islamist rival Fethullah Gulen, a powerful, self-exiled, Pennsylvania-based cleric, who wields influence in the police may well have seen the protests as an opportunity to undermine the prime minister. Mr. Erdogan’s party colleague, President Abdullah Gul, is viewed as close to Mr. Gulen. In a veiled reference to Mr. Erdogan, Mr. Gulen recently preached against hubris. For their part, reports circulating in Istanbul say that the military, which shares secularist suspicisions, has refused police requests for help and that a military hospital had even handed out gas masks to protesters.

Secularist suspicion is also what prompted militant, mostly secular Turkish soccer fans used to fighting each other, to unite much like they did in Cairo. The fans were driven by an instinctive dislike of the police that makes them sensitive to excessive use of force, particularly when it is aimed at suppressing legitimate expression of dissent.

Tension was already mounting between the police and the fans before their entry into Taksim Square. Police last month attacked Carsi, the militant Besiktas JK club’s support group and the most politicized of the supporters, as they marched after a final league match to celebrate the end of the season. The clash was sparked by the fact that the fans were getting to close to Mr. Erdogan’s Besiktas office near the club’s stadium.

“The intensification of police control inside and outside the stadia led the ultras to adopt a mode of military organization and a warlike attitude against the police. As a result football hooliganism qua social problem has to be regarded as the legacy of such policing,“ Italian sociologists Alessandro Dal Lago and Rocco De Biasi argued already 15 years ago in an essay about militant Italian soccer fans.

“What happened on Taksim is incredible, it is unbelievable. Two weeks ago we were discussing how divided we were, how intolerant fans of Galatasaray, Fenerbahce, Besiktas, Trabsonspor and others were. We felt the culture of football was deteriorating. Occupation Gezi Park (the Taksim Square park) has changed that,” a Turkish militant said.

On Taksim Square, the fans, taunting the police, chanted in unison:

Have courage if you are a real man,

Take off your helmet and drop your batons,

Then we’ll see who the real man is.”

The ball is in Mr. Erdogan’s court. Restraining his police and saving trees on Taksim are unlikely to do the trick. Mr. Erdogan will have to re-build bridges and demonstrate that he listens to those who elected him as well as those that didn’t by among other things pursuing an agenda that is inclusive rather than overtly Islamist.