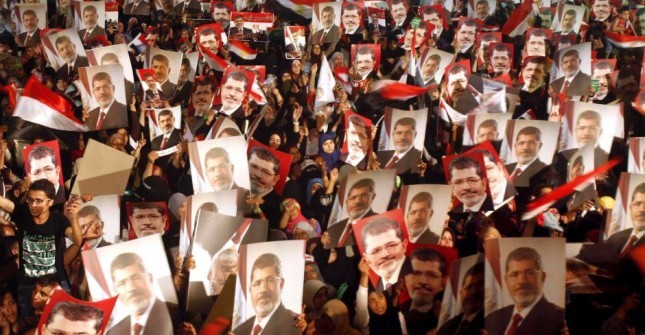 The argument over whether what happened in Egypt on Wednesday, July 3, was a coup or a revolution is really an argument over the legitimacy of the actions taken. If it was a revolution, it was perhaps a manifestation of the popular will, and so would have a sort of Rousseauan legitimacy. If it was merely a military coup against an elected president, then it lacks that legitimacy.

In fact, there certainly was a popular revolutionary element to the events, with literally millions of protesters coming out on Sunday and after, in the biggest demonstrations in Egyptian history. You can’t dismiss that as merely a coup d’etat from on top by a handful of officers.

But on Wednesday there was also a military coup, provoked by the officer corps’ increasing dissatisfaction with President Muhammad Morsi as well as a determination not to stand by as the country threatened to devolve into chaos, as rival street crowds confronted one another.

The Minister of Defense and de facto head of the military establishment, Brig Gen. Abdel Fattah al-Sisi, was the one who set forward the framework for the change in government.

He said that the Dec., 2012, constitution rushed into law by Morsi would be suspended, and a balanced constituent assembly would be formed to revise it. (Dissatisfaction with the Muslim Brotherhood constitution was one of the drivers of Egypt’s Revolution 3.0).

There will be new presidential and parliamentary elections in the coming months.

The interim president is Adly Mansour, the acting chief justice of the Supreme Constitutional Court.

Freedom of the press will be guaranteed, he said, and a mechanism established to allow the youth to be partners in making policy decisions.

Al-Sisi said that the officer corps had been in dialogue with the various political parties and forces since the crisis of November, 2012, when Morsi abruptly declared himself above the law, then pushed through a non-consensual, somewhat theocratic constitution (turnout for the referendum on it was only 30%), then tried to pack an upper house or Senate with Brotherhood members and sympathizers and use it to push through fundamentalist legislation. He said that all the political actors on the Egyptian stage showed a willingness to compromise to end the crisis except Morsi, who refused to show any flexibility.

A last attempt at national reconciliation, brokered by the officers, began June 20, but Morsi’s speech on Tuesday offered nothing that would satisfy the people.

In the end, the revolution and the coup worked in tandem. They were a “revocouption.” Such a conjunction is not unusual in history. The American Revolution against the British was a war before it issued ultimately in a Federal government, and the first president was the general who led the troops. Likewise, the 1949 Communist Revolution in China was not just a matter of the civilian party taking over; there had been a war of liberation against Japan and a civil war between Mao Ze Dong’s Communist troops and the Guomindang, and Mao’s leadership of the Red Army was central to the revolution.

The Rebellion or Tamarrud Movement began in late April (though it built on longstanding youth movements like Kefaya’s Youth for Change and April 6, which had come to see Morsi’s dictatorial tendencies as a threat to values of the revolution). Its young founders felt that President Muhammad Mursi, elected June 30, 2012, had broken his faith with the people and acted extra-legally so many times and so egregiously that he ought not to be allowed to stay in office. They engaged in two main sorts of collective action to get him out. One was a petition drive, in which they sought to collect 15 million signatures asking him to step down. He had been elected by about 13 million to 12 million against his rival Ahmad Shafiq, so 15 million signatures were enough to show that he had lost his popular mandate, in their view.

The other was a call for millions to camp out in the main city squares of the country’s cities beginning on June 30, insisting that they would not leave until Morsi resigned and called new elections. They succeeded wildly with both tactics, and anti-theocratic sentiment was one of the reasons people joined them. Referring to Muslim Brotherhood leaders, crowds at Damietta chanted, “Katatni and Elarian: Egypt won’t become Iran.” The movement was a recall movement, similar to the one Californians launched against Governor Grey Davis when they made him run out of season against Arnold Schwarzanegger (Davis lost). The difference, of course, is that recalls are woven into California law whereas there is no such provision in the Egyptian constitution.

The split personality of the Wednesday revocouption was apparent in the positions many of the youth organizations took in favor of pluralism and of continuing to allow the Muslim Brotherhood’s Freedom and Justice Party to participate in politics and to run for office. Many of the youth seem to have seen Morsi as the problem, not necessarily his party.

In contrast, many of the military officers (and a section of the youth movement) frankly despise the Muslim Brotherhood as a manipulative and grasping cult that uses dishonest tactics to grab power and subject other people to itself. These anti-Brotherhood figures pointed to the attempt to prosecute popular comedian Dr. Bassem Youssef for criticizing Morsi as typical of the Brotherhood’s intrinsic intolerance.

The officer corps did not display much respect for pluralism after the 9:30 pm announcement of the road map.

They closed pro-Muslim Brotherhood television channels and arrested the reporters, though they only detained them a few hours before releasing them. This move appears to have been tactical, ensuring that the Brotherhood media could not help get out a call for resistance to the revocouption. Then the officers issued arrest warrants for 300 major figures in the Muslim Brotherhood, and proceeded to detain Morsi and his circle (including Essam Elarian and former speaker of the now-dissolved lower house of parliament, Saad Katatni), but also Muslim Brotherhood officials who had not held a government post, such as Supreme Guide Muhammad Badie and his no. 2, big businessman Khairat al-Shater.

The military appears to intend press charges against Morsi, Elarian and Katatni dating back to the late zeroes, when they were imprisoned. It was the January 25, 2011, revolution that allowed their supporters to break them out of jail. The military seems to want to insist that they were justly imprisoned for real crimes and that their jailbreak was a further act of illegality.

The mass arrests and the resurrection of Mubarak-era phony prosecutions are both extremely troubling, since they have the effect of criminalizing the Muslim Brotherhood and creating again the category of thought crimes in Egypt, the abolition of which was one of the gains of 2011.

The Muslim Brotherhood and its supporters maintain that Wednesday’s events were nothing more than a seedy military coup against a legitimate, freely elected president. They are angry and despondent about having the military steal from them the fruits of their victory at the polls. Some more radical elements of the Brotherhood have threatened to turn to terrorism as a result of Morsi being deposed.

What Rebellion and al-Sisi have done is extremely dangerous. Not only does it risk undermining the legitimacy of democratic elections, it risks discouraging Muslim religious groups from participating in democratic politics. The danger is real. A similar revocation of the results of a revolution in Algeria late in 1991 threw the country into a decade and a half of civil war that left over 150,000 dead. The ‘debaathification’ program of the post-2003 Iraqi government, which was vindictive toward former members of the Baath Party, probably helped throw that country into a low-grade guerrilla struggle that continues to this day. Egyptians who think their country is immune from such phenomena are fooling themselves.

Egypt’s future stability and prosperity now depends on whether the officer corps and youth are mature enough to return to pluralist principals and cease persecuting the Muslim Brotherhood just because Morsi was high-handed. Their media has to be free and the 300 officials have to be released unless charged with really-existing crimes on the statute books. And it depends on whether the Muslim Brotherhood is wise and mature enough to roll with this punch and to reform itself, giving up its cliquish and cult-like internal solidarity in favor of truly becoming a nation-wide, center-right, democratic opposition party. If they take this course, they have a chance of emulating Turkey’s Justice and Development Party (AKP) and one day coming back to power (an observant Muslim prime minister was forced out in 1997, but members of his party just regrouped and ultimately came to rule the country). If the Muslim Brotherhood adherents instead turn to terrorism and guerrilla actions, they will tear the country apart and probably blacken the name of political Islam for decades.

At the moment, neither of those two groups is demonstrating the maturity and high-mindedness that would reassure me about the prospects for a genuinely democratic transition.