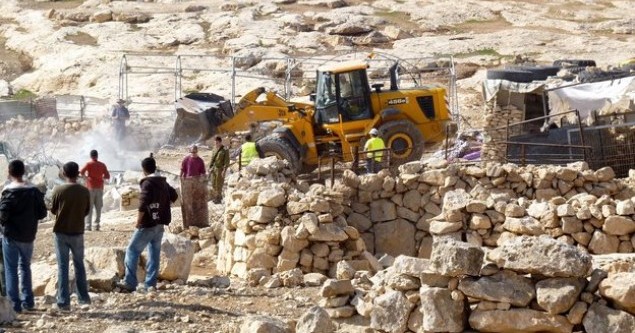 Is Israel preparing to annex Area C, as a growing number of analysts have recently been speculating?

This week, on a visit to the Israel’s tourism bureau in Nazareth, I came across an official brochure, “Your Next Vacation: Israel”, that suggests the answer. The brochure is supplied to travel agents around the world as well as to hundreds of thousands of tourists who arrive in Israel each year.

Inside is a map, produced by the Ministry of Tourism, that shows both Israel and the occupied territories. Helpfully, it incorporates Israel’s interpretation of the territorial demarcations created by the Oslo Accords of the mid-1990s.

Oslo divided the West Bank into three parts temporarily – for a period of five years – while Israel and the Palestinians were supposed to negotiate a final-status agreement that, it was widely assumed, would lead to the creation of a Palestinian state in the West Bank, Gaza and East Jerusalem.

Area A, the smallest part of the West Bank and restricted chiefly to the main Palestinian cities, was placed under the full control of the newly created Palestinian Authority.

Area B, mainly covering the areas around the cities, was under the shared control of the PA and Israel, with Israel taking charge of security matters and the Palestinians responsible for civil affairs.

Today, Areas A and B together cover about 39 per cent of the West Bank.

But by far the largest portion of the West Bank, Area C, was handed over to Israel’s full control. It was assumed by most observers that this land, 61 per cent of the West Bank, would eventually become the territorial bulk of a future Palestinian state.

Over the past two decades, however, Israel has used its hold over Area C – and the lack of an agreement, due to its own intransigence – to entrench and expand the settlements there.

There are now nearly 350,000 Jewish settlers living in more than 250 settlements and outposts dotted all over Area C (a further 200,000 settlers live in East Jerusalem). These settlers, backed by Israeli soldiers and a network of civilian and military bureaucrats, have created a reign of terror that has gradually encouraged Palestinians in Area C to migrate to the cities, still nominally under Palestinian Authority control.

There were once hundreds of thousands of Palestinians in Area C, most making their living from agriculture. Today, some estimates put that number below 100,000, but the population is certainly no higher than 150,000. Of these, most live in extreme poverty and insecurity:

Further, what the Oslo Accords assumed would be Israel’s temporary control of Area C has become effectively permanent – part of what the Israeli Supreme Court recently acknowledged as Israel’s “prolonged occupation” of the West Bank.

What all this means is that the debate about whether Israel is going to annex Area C is largely academic. The annexation has already taken place, just not formally. The advantage of this discreet method of annexation – what Israeli general Moshe Dayan once termed “creeping annexation” – is that Israel is under no pressure to confer citizenship on the few Palestinians remaining in Area C.

The brochure map provides a helpful illustration of Israeli thinking. It was created by the Tourism Ministry in 2007, before the current right-wing government of Benjamin Netanyahu came to power on a platform of tearing up the Oslo Accords. That was the period of Ehud Olmert’s government, which was supposedly committed to reaching an agreement with the Palestinians based on a two-state solution.

The map offers a clear indication of how even Israel’s supposed peace-makers envisage the Palestinians’ future.

The map fails to delineate any territory identifiable as the West Bank, referring to it instead as the Biblical kingdoms of Judea and Samaria. That is also the way Israeli textbooks have presented the West Bank to generations of Israeli schoolchildren: as a single territorial unit of Greater Israel, ruled over by Israel. The Green Line was erased on Hebrew maps from the moment the occupation began.

But the tourism map has been drafted not for a domestic audience but for a foreign one.

What is most surprising is that the map acknowledges the Oslo Accords, but only in part. It marks out Areas A and B, designating them in pink and yellow respectively.

But where is Area C on the map? According to the map’s legend, there is no Area C. It has disappeared. It is not designated and it is shown on the map in the same colours used for “Israel proper”.

When Israeli officials ask tourists at the country’s international airport or at the borders if they are intending to cross into the occupied territories, it appears that they are not actually referring to most of the West Bank – Area C.

The map give us an acute insight into how even the peace camp envisions the rosiest imaginable future: Palestinians corralled into a tiny pseudo-state on about 9 per cent of historic Palestine, split between two cages, the West Bank and Gaza, and denied a capital in East Jerusalem. This is the picture Israel implicitly presents to millions of tourists.

In the view of more hardline Israelis, of course, there are worse scenarios – though, we may conclude, the Tourism Ministry is not ready just yet to publicise them.