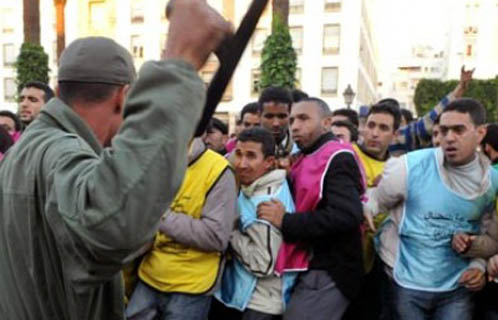 The organizers of the 12 February demonstration have vowed to hold weekly demonstrations until the government meets their demands. The CNCD, the coalition of opposition forces organizing the protests, suffers numerous obstacles in mobilizing the critical mass needed to produce the political pressure seen in Tunisia and Egypt. It lacks a mass following and it has not been able to attract large numbers of followers from the lower classes and rural people into its ranks.

Additionally, the most vocal personalities associated with it — Said Sadi of the RCD and Ali Belhadj for example — alienate other opposition groups and many mainstream Algerians, put off by Sadi’s aggressive secularism and links to the security services and Belhadj’s religious views and links to the historic FIS. The CNCD benefits from good links to student groups though these need to be expanded to a broader set of campuses.

Algeria lacks the credible social intermediaries that help make popular mobilization possible and effective; part of this is the result of regime policy (the near total absorption of civil society into the FLN during the one-party phase for example which has hindered business and labor groups from building strong roots in society) and partly the result of the atomization caused by careless urbanization and the Civil War (and the colonial experience before that). Social and political fragmentation give way to many of the problems facing Algerian society today and empower the regime’s hand in politics significantly.

At the same time, while many Algerians are fed up with the political and economic situation in their country, there is a significant continent fearful of sudden political transitions and mass movements recalling the country’s bitter civil war which followed snap “democratization” after a youth uprising in 1988. This creates skepticism and hesitation among key elites and in the population at large (though among older people more than youths).

The CNCD may benefit from the student protest movement, turning out tens (and more) of students for protests and sit-ins at the Presidential Palace and the Ministry of Higher Education; nurses are on strike and demonstrating; farmers are threatening sit-ins at the Ministry of Agriculture; unemployed residents are reported to be doing the same at town halls in various parts of the country.

Many of these protests are narrowly focused and can be addressed on their own terms by changing ministers or issuing or repealing decrees or the like; unless they are brought into a wider opposition narrative that links the demands of dissatisfied engineering students or farmers looking for better irrigation policy to the inadequacies and structural injustices of the regime itself, combining sectorial demands for change into something much greater.

The bulk of the legal opposition parties are avoiding the demonstrations if not actively condemning (or rather mocking) the 12 February crowd. The MSP condemned the march categorically, in line with its membership in the ruling coalition but called on the opposition to use “other peaceful means” besides demonstrations; the FNA has spoken in support of the demonstrations but has criticized Said Sadi and is not participating in them directly (its leader, Moussa Touati, said members could participate but that the party would not while calling for strikes and noting that withdrawing his APN delegates is “on the table”); the PT has criticized the demonstrators saying “half of them were journalists assigned to cover it and there was no public involvement in the process”.

The efficiency of the security apparatus combined with organizational problems within the CNCD (aside from its numbers), such as its tendency to give advance notice of times and places for demonstrations and sit-ins which make it easy for police to occupy locations before protestors do (the CNCD has resolved for another demonstration on Friday, 19 February to be followed by protests each week after until the government meets their demands).

The Algerian security forces have shown a keener eye for preemption and greater restraint than Tunisia’s or Egypt’s. Past experience cautions Algerian officials to refrain from using live ammunition and impressive force on demonstrators, understanding that such action leads to more agitation against police and eventually the political leadership. Algeria’s regime operates much like an old Roman garrison, defending its colonists from raids by locals trying to get rid of an exploitative pestilence. Like any military outpost, the regime has learned well how to use economic and factional levies to extend its lifespan.

This is not to say the regime is queasy about using overwhelming force: as soon as demonstrations cease being manageable headaches there will be swift, unrelenting repression (though not necessarily successful in the political sense, though the likelihood of successful repression is somewhat higher in Algeria than it was in Egypt or Tunisia as a result of the regime’s overall mentality, the general weakness and inexperience of Algerian political parties and civil society, Algeria’s lower global profile and status as a major energy exporter (and resultant relative independence, also note: there is no Algerian Camp David) and its ability to use gas money to regulate regional demands and co-opt ideological and political leaders).

Western condemnations or expressions of concern are unlikely to make deep dents in the regime’s overall position though it may help prod along pro forma concessions and to some degree moderate immediate responses. But thus far the regime’s representatives have been dismissive of foreign judgements and the PT, officially an opposition party, released a spirited communique criticizing France and the United States’ comments in particular, rebuking State Department calls for restraint by referencing America’s own USA PATRIOT ACT and attacking EU countries’ (i.e., France) “discriminatory policies toward the Roma,” further pressing France: “should it not show restraint when suppressing the banlieues and promising to clean up the Karcher?” One wonders what the PT hopes to accomplish in this respect.

On all these fronts its important to note that the Algerian regime has considerably more experience with the kinds of dissent that shook Tunisia and Egypt. This has stopped the Algerian protests and riots from escalating in the way they did in Tunisia and Egypt. Algeria’s civil military relations should also be considered. Algeria’s military features many similarities to Egypt’s in its relationship to state policy but enjoys a more central role in decision-making but has less prestige with the population at large. One cannot see the Algerian military intervening in a moment of crisis resulting from popular unrest and being greeted by smiling demonstrators.

This blogger wrote a depressing piece for Foreign Policy.com on the overall situation as it looked about two or three days ago. Its conclusion may be proven wrong. One continues to hear rumors around an imminent cabinet reshuffle, surely being thoroughly considered (as the three party coalition meets to “consider” the country’s problems), may signal some key shift in the balance or focus of power — the technocrats (especially the longest serving and least popular ones) may be the most likely candidates for a toss around.

The Algerian cabinet is very old, in terms of its, a point made here in the past and in a recent issue of El Watan. The emergence of young, open-minded technocrats would be a positive development, of course depending on their political and ideological loyalties and affinities.