A ‘Virtual’ Solution to the Israeli-Palestinian Issue? 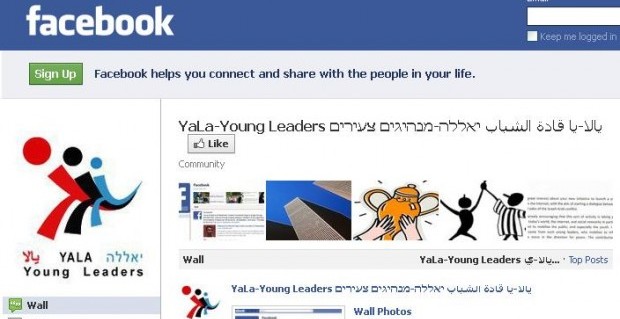 Just days after long-time Israeli-Palestinian peace negotiators Yitzhak Molcho and Saeb Erekat clashed yet again at a meeting in Jordan, thousands of young people from across the Middle East gathered together online for an event which set a new standard for mutual understanding and partnershipConferences bringing together Jews and Arabs might be nothing new. But what set this particular event apart is that it happened in the virtual world of Shaker, a Facebook application that allows for instantaneous interaction between users utilising cartoon-like personas that have conversations or attend events.

The brainchild of YaLa Young Leaders – an online movement formed by Israelis and Palestinians last May and already “liked” by more than 50,000 people on Facebook – the conference garnered vast media attention and even attracted some high-profile dignitaries, including Jordan’s Prince Hassan bin Talal, US Secretary of State Hillary Rodham Clinton, blind opera superstar Andrea Bocelli and Barcelona football coach Josep “Pep” Guardiola, among others.

More than 12,000 people “attended” the two-day online event, indicating that there is a solid base of people still committed to finding a way to resolve the on-going conflict between Israelis and Palestinians.

YaLa is a play on the Arabic word for “get a move on!” and is a phrase also incorporated into everyday Hebrew. The YaLa movement includes volunteers from numerous countries around the Middle East and is now in the process of determining what steps to take next in order to keep this momentum going.

“The idea is to give young people, who are as capable as some of the main leaders, the chance to participate”, says Nimrod BenZev of the Peres Center for Peace, the Israeli organisation that helped establish YaLa together with Ramallah-based Yala Palestine.

BenZev refrains from saying that the online event was conducted in order to create “peace”; rather, he says it was to “improve regional cooperation and to find a way to end the conflict and the violence”.

“We are trying to create empathy and a sense of a joint future”, he says, adding, “peace is just not a fashionable word anymore and people in this region are sick of hearing it”.

Indeed, the focus of the virtual conference was to find fresh voices and allow them to create resolutions in a more “democratic” way.

Those who logged onto Shaker for the virtual conference found themselves in a green and colourful world, where their cartoon-like personas could engage in discussion or attend one of the events taking place.

Attendees could visit the music room, contribute to a “book project”, or view the games portal and help develop an online gaming initiative. But perhaps most importantly, those who joined the conference could have their say about the movement’s “Declaration of Principles” and help set its agenda for the future.

Among the conclusions reached by the thousands of young people who interacted online was the need for a virtual academy that will promote new ideas and provide webinars – or web-based seminars – to help train a new set of young leaders.

“We want to create a strong lobby in the Middle East to affect policy, build a better future for everyone and use our influence to stop future wars”, states Hamze Awawde, one of YaLa’s young Palestinian leaders.

“We see this movement as the basis of change and we need strong young people who are well educated and intellectual. Then we will be able to change our future”, he says.

Despite some of the social pressures in the region that discourage relations between Israelis and Arabs, Awawde points out that YaLa, thanks especially to the virtual conference, has been successful in attracting newcomers who share the vision.

Khaled Al-Jacer, a YaLa leader from Kuwait, says that the movement has finally given him a chance to interact – albeit virtually – with Israelis.

“I had never communicated with or met any Israelis in my life before I joined YaLa”, says Al-Jacer, explaining that until now he was not able to build a mental image of Israelis as human beings.

“I [have] now found that I have a lot in common with Israelis”, he says, adding that from what he has learnt about Israel’s progress in technology, the Jewish state might even be a “catalyst for regional development and success”.

“As for peace”, continues Al-Jacer, “I think it is the only option – it is a must! There will never be a military solution to this century old conflict. Each side must compromise and the sooner they realise this fact, the sooner we will have peace.”

Ruth Eglash is a senior reporter at The Jerusalem Post. Last year she became the first recipient of the United Nations X-Cultural Reporting award for a story she wrote with a Jordanian journalist.