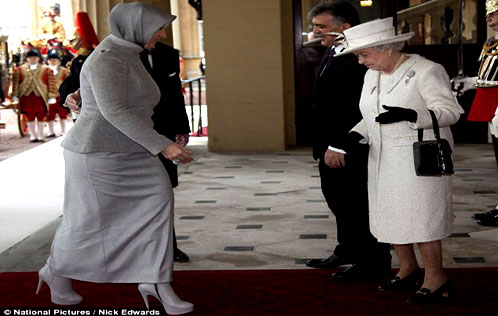 First the feet emerged, covered in light grey leather ankle boots, with heels as long and thin as needles. Then the legs draped in a grey skirt. And eventually she came into view, towering above the pavement in her unexpected stilettos. This wasn’t Angelina Jolie, nor a Bond girl, but the wife of the president of Turkey, on a visit to the UK with her husband, to meet Her Majesty.

The Queen, ever the symbol of restraint and decorum in a world that has become excessively overt in its expression, was clearly shocked. Even the paparazzi managed to capture her gobsmacked on film. Behind one’s frown one was wondering if it was a cackle of hilarity that was being suppressed, or a grimace of horror. Her Majesty has seen everything but the six-inch futuristic spikes shocked even her.

President Gul’s visit is important to both Britain and Turkey, who are looking to strengthen their relations. Turkey is a rising power and one of the world’s economies bucking the trend of the current financial crisis. Turkey is a friend Britain wants to have. So it is hard to know if the British media coverage of the shocking heels will help or hinder diplomacy.

Hairunnisa Gul is more usually controversial for wearing her headscarf in her capacity as wife of the president, something that has outraged Turkey’s hardline secularists. It is a welcome change – perhaps a calculated one – to divert attention to her feet.

The British press rather like the shoes of high- profile women. Last year Sheikha Mozah, the wife of the Emir of Qatar, captured the attention of the print media with her fur boots with “icicle” heels. Her shoes were a hit and marked her out as a leading lady to watch.

Leading British ladies are wearing more demure footwear. The Queen of course has her conservative pumps. Earlier this summer, Theresa May MP, one of Britain’s most senior female politicians, was splashed all over the press after mis-telling a story about a man supposedly granted leave to stay in Britain because he owned a cat.

She made great media fodder because the shoes she was wearing that day were cute little leopard skin kitten heels.

Research released this week by IBM suggests that the height of women’s heels can tell us something about the state of the economy. It is a bit like the Hemline Index, which was proposed in 1926 by George Taylor. It suggested that women’s hemlines go up in boom times, and down in recession. The inverse relationship applies to heels.

According to the IBM expert: “Usually, in an economic downturn, heels go up and stay up – as consumers turn to more flamboyant fashions as a means of fantasy and escape.” Their research analysed social media discussions about heel heights. Contrary to expectations they found that heel height is about to go down. “This time, something different is happening – perhaps a mood of long-term austerity is evolving among consumers sparking a desire to reduce ostentation in everyday settings.”

The fact that the leading ladies of Turkey and Qatar are wearing eye-popping heels tells us something important not about fashion, but about a new world order. For the second year in a row, Qatar is the world’s fastest-growing economy. Turkey is one of the Next 11, and growing in stature politically. On the other hand, Britain’s Queen along with Theresa May are wearing low pumps, and barely there kitten heels. Only time will tell which theory of heel height will prove true, and who is living in reality, and who is escaping into fantasy.