‘Oil in the West Bank’: Guess Who’s Claiming It? 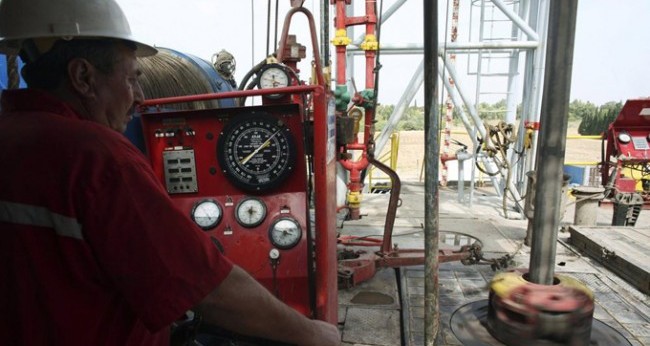 Israeli investors had reason to celebrate last month with the news that Israel may soon be joining the club of oil-producing states, in addition to its recent finds of large natural gas deposits off the coast.

Shares in Givot Olam, an Israeli oil exploration company, rallied on reports that it had located larger oil reserves at its Meged 5 site than previously estimated.

The company, which says it has already sold $40m worth of oil since the Meged field went operational in 2011, now believes that the well is sitting on exploitable reserves of as much as 3.53 million barrels. According to Palestinian officials, the reserves may be far bigger.

Only one cloud looms on the horizon. It is unclear how much of this new-found oil wealth actually belongs to Israel. The well sits on the so-called Green Line, the armistice line of 1948 that formally separates Israel from the occupied Palestinian territories.

According to Palestinian officials, Israel has moved the course of its concrete and steel separation wall – claiming security – to provide Givot Olam with unfettered access to the site, between the Israeli town of Rosh Haayin and the Palestinian village of Rantis, north-west of Ramallah.

Dror Etkes, an Israeli researcher who tracks Israeli activities in the West Bank, said the Meged site was “a few dozen metres” inside the Green Line.

Israel and Givot Olam, however, have made access difficult, arguing that Meged 5 is affected by an Israeli military firing range next to it on the other side of the Green Line, in occupied Palestinian territory. In the past, Israeli media have been barred from filming or photographing the site.

Etkes, however, said he was unaware of any military training ever having taken place at the firing range.

But what seems clear is that the oil field extends over a very large area, with much of the reserves believed to lie under Palestinian territory in the West Bank.

Oil in the occupied territories

Although the Israeli energy and water ministry declined to comment publicly on Meged 5, a senior official privately told Al Jazeera that the field extended at least 125 sq km, and possibly as much as 250 sq km.

According to the Oslo accords, Israel is obligated to coordinate any exploration for natural resources in shared territory with the Palestinian Authority, and reach agreements on how to divide the benefits.

“The problem for us is that the occupation is not just about settlements and land confiscation. Israel is also massively profiting from exploiting our resources. There’s lots of money in it for Israel, which is why the occupation has become so prolonged,” he said.

Last year, when Meged 5′s reserves were believed to be 1.5 million barrels – less than half the current estimates – Jamil al-Mutaur, deputy chairman of the Palestinian Environmental Quality Authority, threatened to sue Israel in the international courts for its unilateral operations at Meged.

Gidon Bromberg, director of environmental group Friends of the Earth Middle East, said his group would submit questions to the Israeli government about Meged 5.

“If there are reserves of oil under the occupied territories, then absolutely Israel must talk to the Palestinian Authority about any exploration being undertaken to extract them,” he said.

The expectation of a dramatic increase in future profits for Israel from drilling at Meged 5 comes shortly after the World Bank issued a report arguing that Israel was destroying any hope that a future Palestinian state could be economically viable.

According to the World Bank, Israel’s occupation is preventing the Palestinians from exploiting key natural resources, either by plundering them for itself or by making them inaccessible to Palestinians through movement restrictions and classifying areas as military zones.

The World Bank report did not include the Meged oil field among the Palestinian natural resources it listed. A spokeswoman said there had not been enough data available for its researchers to assess the significance of the oil field.

In the report, the World Bank focuses on a large area of the West Bank designated as Area C in the Oslo Accords, which continues to be under Israel’s full control and where Israel has built more than 200 settlements.

Area C, comprising nearly two-thirds of West Bank territory, includes most of the Palestinians’ major resources, including land for agriculture and development, water aquifers, Dead Sea minerals, quarries, and archaeological and tourism sites. It is also where much of the Meged reserves are likely to be located.

Israel’s energy and water ministry is led by Silvan Shalom, a close ally of Prime Minister Benjamin Netanyahu and a supporter of Israel’s settlement programme in the West Bank.

Naftali Bennett, who is the trade and industry minister and the leader of the pro-settler Jewish Home party, has repeatedly called for Israel’s formal annexation of Area C.

According to the Bank’s research, the Palestinian Authority could generate at least $3.4bn in extra income a year if given full control of Area C – though that figure does not take account of the expected boom in oil revenues.

The World Bank spokeswoman said the figure was “very conservative” as there were some resources, such as the oil field, for which its researchers had not been able to collect data.

Nonetheless, even the income from resources identified by the World Bank would increase the PA’s GDP by a third, reducing a ballooning deficit, cutting unemployment rates that have reached 23 percent, easing poverty and food insecurity and helping the fledgling state break free of aid dependency.

But none of this could be achieved, said the Bank, as long as Israel maintains its chokehold on Area C – or what the Bank calls “restricted land”.

Mariam Sherman, the World Bank’s director in the West Bank and Gaza, said: “Unleashing the potential from that ‘restricted land’ … and allowing Palestinians to put these resources to work would provide whole new areas of economic activity and set the economy on the path to sustainable growth.”

John Kerry, the US secretary of state, revived peace talks between Israel and the Palestinians this summer after promising the PA that it would help raise $4bn to invest in the Palestinian economy, much of it directed at projects in Area C.

However, the World Bank report suggests that Israeli movement restrictions in Area C and its refusal to issue development permits make ventures there too risky for Palestinian investors.

Khatib said: “The PA is facing a $2bn deficit and desperately needs to invest in major projects taking advantage of our natural resources. That is the only way to end the PA’s dependence on international aid.”

Israel’s Prime Minister, Binyamin Netanyahu, has said he is pursuing “economic peace” with the Palestinians in the occupied territories in lieu of diplomatic advances. The PA, by contrast, characterises Israel’s policy as one of “economic warfare” against Palestinians.

Israel’s long-standing policy towards resources in the occupied territories suggests it is unlikely to honour its obligations under international agreements on the spoils from the Meged oil field.

Etkes said: “The reality is that Israel is enjoying the economic fruits of the occupation by exploiting resources that belong to the Palestinians.”

In the case of the region’s main aquifers, which lie under the hills of the West Bank, Israel has demolished hundreds of Palestinian wells to maintain its exclusive control over water resources. Settlements and military bases have been located over the main extraction points.

A report by al-Haq earlier this year showed that Israel took 89 percent of the total water withdrawn from the West Bank aquifer, leaving the Palestinians with only 11 percent. As a result, Israelis had on average 300 litres of water a day each, compared with just 73 litres for Palestinians – below the 100 litres per capita recommended by the World Health Organisation.

Regarding another key resource, Israel’s Supreme Court ruled in 2011 that a dozen Israeli firms should be able to continue extracting stone for construction from West Bank quarries, because Israel’s occupation was no longer considered temporary but had become “prolonged”.

The ruling was widely criticised by legal experts, who argued it ignored prohibitions on resource theft in international law, including the 1907 Hague Convention.

The PA has estimated the annual value of the stone quarried by Israel at $900m.

Meged 5 would not be the first time Israel has been found to have plundered its neighbours’ oil reserves.

In 1975 it emerged that Israel had been drilling at the Abu Rudeis field following its occupation of the Sinai Peninsula during the 1967 war. The oil field supplied two-thirds of Israel’s domestic needs before Israel was forced to hand back the wells to Egypt.

Israel continued to try to exploit Sinai’s oil, drilling further south at the Alma field but had to return those wells too when it signed the Camp David peace agreement with Egypt in 1979.

Hundreds of sites inside Israel and the occupied territories were surveyed for oil in subsequent years without significant success – until the Meged find.

Israel’s announcement in recent years of discoveries of large natural gas deposits in the Mediterranean has increased tensions with neighbouring countries, especially Lebanon, which has claimed that Israel is drilling in areas where maritime borders are disputed.

Two deposits, named Tamar and Leviathan, are expected to make Israel a gas exporter by 2016.

The Palestinians have located their own significant gas field just off the coast of Gaza. In 2000, the then Palestinian president Yasser Arafat declared the site “will provide a solid foundation for our economy, for establishing an independent state”.

However, Israel has repeatedly stymied efforts to extract the gas, arguing that the profits would be used to fund terrorism. Instead, the Palestinians have continued to be dependent on Israel for meeting their energy requirements

Since 2009 Israel has also violated the Oslo accords by reducing Palestinians’ access to Gaza’s maritime waters, from 20 nautical miles to three.

According to one analyst, Anais Antreasyan, the most plausible interpretation of Israel’s actions is that it hopes eventually to “integrate the gas fields off Gaza into the adjacent Israeli offshore installations”, thereby “blocking Palestinian economic development”.

In the view of Atreasyan and others, Israel’s aim is to prevent the emergence of the kind of independent Palestinian economy that would follow if the Palestinians were able to tap lucrative income streams from the gas fields off Gaza and the likely oil under the West Bank.

“This way,” Khatib said, “Israel can more easily keep the Palestinians struggling from day to day, just to survive economically.”

One Response to ‘Oil in the West Bank’: Guess Who’s Claiming It?