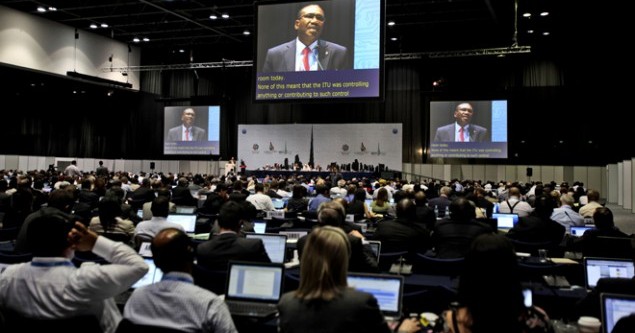 Cue spirited PR campaigns from Google (which has gone as far as to use the hallowed homepage to drum up support for it’s ‘Take Action’ campaign for a ‘free and open Internet’) and others, pointing out that we shouldn’t be letting governments decide on the future of the Internet. This is interesting, as that’s precisely what governments think they not only have the right to do but, working on behalf of their respective peoples, should be doing.

Dubai, meanwhile, gets a win for hosting the event and racks up some nifty international publicity.

Of the many aspects of the ‘Internet age’ being discussed (in many cases, I fear, by people whose understanding of telecommunications is rooted firmly in yoghurt pots and string) is how telcos can share in the enormous revenues being derived from companies using the Internet to provide services to users. These people, argue the telcos, should be paying to use our networks.

It’s not only absolute tosh as a proposal, it would be laughable if it weren’t being actually listened to at the ITU. Telcos built the rods for their own backs long ago – they built roads and then insisted in charging tolls for the use of those roads which were calculated by the minute. Now they’re trying to charge by the value of freight or the transaction you’re travelling to close. With precious little innovation on offer, they’re now challenged by the fact they have simply become bulk data providers, irrelevant to us in the main and certainly no active part of the thriving, active and profitable ecosystem of the Internet.

So what they want the ITU to do is grant them a charter to continue doing what they have done so well in the past – sit back and tax network users for using their networks, charging unfairly high rates for minimum quality service and contributing not one jot of value to the communities they are meant to serve.

For me the debate regarding regulation is of little interest – governments already regulate effectively enough at the state level and if they all decide to do more regulatin’ I suspect there’s little we can do.

But the telcos and their bid to pass a cash cow’s charter? That’s the one that’ll affect you and me the most, I suspect…