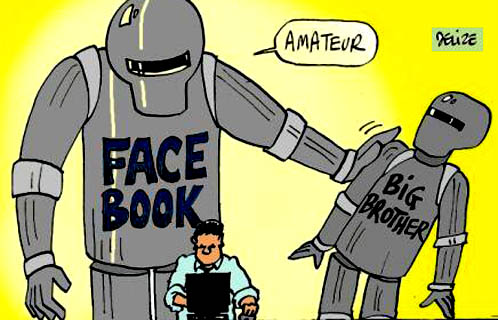 The recent massive facepalmohmigodicantbelievetheydidthat scandal involving Facebook hiring a bunch of mendacious flaks to tout around fear-mongering stories about Google’s ‘privacy issues’ merely highlighted (as Gulf News’ Scott Shuey pointed out in his Saturday column) the issues of online privacy in general – and didn’t leave Facebook unscarred. Amusingly, Shuey points out that, in his experience, most PRs are “…soulless drones who would sell their own mothers to keep a client happy.

I can’t disagree with him, but then most social media sites and online publishers are soulless bots who are already selling us all to keep clients happy. It’s a marriage made in heaven, no?

As time goes by, we’re putting more and more data out there – and that data can be interconnected in ever-more creative and interesting ways. I was highly tickled the other day to do a Google Image Search on myself, looking for a picture someone had taken of me wot we needed for a presentation. As well as the usual daft pictures of me (of which the sunflower one is a firm favourite), the search started to throw up images from my blog and, as we go further down the search, images from people associated with me for one reason or another. The growing tree of interconnectedness was fun, if mildly disconcerting – try doing an image search on yourself and see what I mean (I assume you’re in the habit of Googling yourself or have set up an alert on yourself/your unique identifying keyphrase).Bing also delivers, although relevance appears weaker and the associations come in more strongly and earlier.

Here’s a scary trick. Take a look at your Google Search History, linked here. You’ll have to sign in with Gmail and then you can access your entire history of search – every last query stored for posterity on Goog’s servers. I deleted mine, believe me you don’t want to see the things I was looking up while I was researching Beirut, something I have alluded to in posts passim!

The basic rule of thumb is that if you put it out on the web (and by that I most definitely include Twitter and all other things comfortingly transient), it stays out on the web. Take three or four seemingly disconnected pieces of data and you can start to build a profile – the more comprehensive the profile, the more sticky every new piece of data becomes until you can build exponentially more intelligent data sets that define you very nicely indeed.

Facebook has consistently been in trouble over things like privacy settings and is often accused of encouraging people to share too much. But that’s the trouble with social search – you’re selling increasingly intelligently filtered access and so you need to get people to share more as well as create more from what they do share. It’s a self-fulfilling beast. And it’s after your data.

There’s no need to buy a nuclear bunker quite yet, but it would do as well to be aware that you’re now essentially a public figure. And you’re leaving footprints behind all the time…