How I’ve Been Inspired by the ‘Arab Revolutions’ 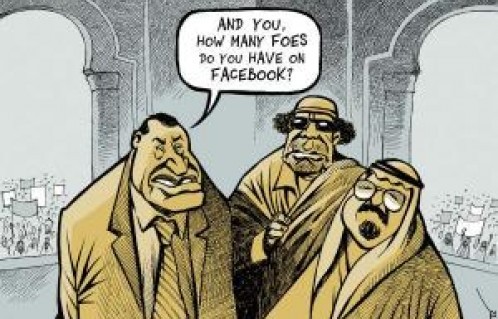 My interest in political and human rights and social media started recently with the revolution in Egypt. Before January 2011, politics and human rights never interested me. But like many other Arab youth, the changes in the Arab world opened my eyes and mind to a new world. And there is no turning back.

In early 2011, the revolutions in Tunisia and Egypt gave me, and many others, the courage to voice our thoughts without fear or hesitation.

When the tide of Arab Awakening reached Bahrain, I decided I needed to have a louder voice as a woman and I established an online presence by creating my own blog under my real name.

At first, I was afraid of the possible repercussions. But when people began to be harassed, arrested and killed in the protests, the fear in me was killed too. I watched those people sacrifice everything, while I helplessly stood still. After that, I felt I needed to share what was once very personal to me – my writings – with the world. I felt obliged to speak up because it was the least I could do. And so I wrote.

I tweeted about women’s right to be present on the street, as many people were opposed to the idea of women demonstrating alongside men; about women’s right to vote and occupy leadership positions, as many people to this day prefer to vote for men over women; about Bahraini women being able to pass citizenship on to their children since currently it’s passed down only through the father; and about the right to revolt, the right to demand justice and the right to participate in writing our own constitution.

The social media world has become a place to make new friends and meet like-minded people. Even my mother, who was once computer illiterate, became more involved and learned new ways of interacting with others and extracting the latest news. Now, whenever she meets a person with an iPad or a Blackberry, she asks: “Do you have Twitter? What’s new?”

It felt as though the women of my country had finally acquired a voice. And I’m not talking about female activists or journalists, but the average women – younger, older, of different educational backgrounds – who have joined their peers to demand rights, their rights.

More recently, I joined with a group of Bahraini youth to dedicate a tweet a day to human rights. The hash tag facility on Twitter helped us spread the fire, so to speak. The word spread about this initiative and soon we were all both students and teachers. Everyone participated, even non-Bahrainis, in discussing and educating others about our rights.

It is taking time for people to learn about their rights and for women to realise their importance in our societies, especially during this critical time of change. It will take time to demand and obtain what is ours. But change is happening.

So what’s next for social media in my part of the world?

I think it ought to be incorporated in school programmes. Perhaps it is still hard for many governments to initiate this step due to a lack of resources but alternatives are available. In every village, there are always a couple of houses with internet access. If those couple of houses can become a hub for those around them, we can manage to connect, and teach, an entire village.

Moreover, people with access to such information could start home workshops and teach their neighbours how to interact online.

Governments may better appreciate the potential of social media in coming years but it is up to citizens to engage today. Tweet once a day, participate in social media meetings, volunteer to teach and brainstorm ways to benefit your society! Never underestimate the knowledge you have; pass it on.

Samah Hussain is an architect, passionate about human rights and writing. Hussain’s blog can be found on samahhussain.blogspot.com.