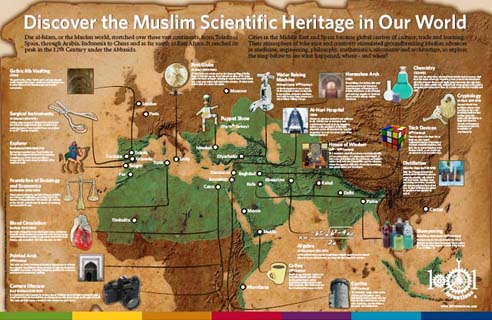 Eight-year-old Marissa Campis is playing a game that is part of the new exhibition, “1,001 Inventions: Discover the Muslim Heritage in Our World” at the New York Hall of Science in Queens, New York. The touch screen displays a family room, asking visitors to select the items invented during the height of Islam’s “Golden Age”, which lasted for 1,000 years between the 7th and 17th centuries.

“What they made was interesting – like an old fashioned camera,” said Marissa, referring to her favourite invention, a camera obscura, which paved the way for modern day photography. She didn’t know it yet, but she was learning about Muslim culture from Asia, Africa and the southern part of Europe.

The New York Hall of Science was the first stop of the American tour after installations in London and Istanbul drew a recording-breaking 800,000 visitors.

The exhibition’s displays engage visitors not only by explaining how scientific inventions work, it also challenges negative stereotypes of Muslims that have become commonplace as a result of those who associate their hateful actions with Islam. This was reflected by a Pew Research Center report from 2009 that states 38 percent of Americans say Islam encourages violence more than other faiths.

The exhibition breaks down the stereotype that Muslims are associated with violence. By informing visitors of the rich cultural heritage of Muslims, the installation also dispels the narrative that has been shaped by Orientalism, a Western perspective of the East that is often criticised for misrepresenting Eastern civilisation as being less innovative and generally in opposition to Western culture. This view has prevailed for centuries in the West. The scientific achievements from Islam’s Golden Age are surprising to all visitors regardless of their religion; this will be the first time many Muslim Americans learn about these inventions as well since it is a period of time that is not taught in most schools in the West.

While the era covered by the exhibition is considered the Golden Age of Muslim civilisation, this was the same period as Europe’s Dark Ages. This disparity is addressed in the short film 1001 Inventions and The Library of Secrets that introduces the exhibition, starring Academy Award-winning actor Ben Kingsley. The film, in which Kingsley plays 12th century Turkish inventor Al Jazari, follows a group of 21st century teenagers who are taken by Al Jazari on a journey to meet scientists and engineers from Islam’s Golden Age. The film won the Best Educational Film award at 2010 Cannes Film Festival.

As they walk through the purple and gold themed exhibition hall, visitors are drawn to the centrepiece of the display, a 20-foot replica of a water-powered clock created by Al Jazari. And across from the clock is a suspended model of a flying machine designed by 9th century inventor Abbas ibn Firnas, who some consider to be the first person to make a scientific attempt at flying. Yet another popular feature is a drawing of the ship used by the 15th century Muslim Chinese admiral Zheng He, whose ships have been estimated to be as large as football fields.

The display also focuses on non-Muslim scientists and inventors, such as Maimonides – the 12th century Jewish physician from Cordoba, Spain – who worked with Muslim philosophers. His place in the exhibition reveals the successful intercultural partnerships of scientists that led to some of the greatest scientific inventions in history. This history of partnerships is also reflected by the fact that inventors from Islam’s Golden Age built upon the knowledge of their predecessors from Ancient Rome and Greece, and the work of Muslim scientists was later used by European inventors during the Renaissance Era.

Such links demonstrate the rich legacy of scientific achievements shared by humanity.

The “1,001 Inventions” exhibition, an initiative of the Foundation for Science, Technology and Civilisation, a non-profit, non-religious and academic organisation in the UK, will be in New York until April. Its next stop will be the California Science Center in Los Angeles before it moves to the National Geographic Museum in Washington, DC in 2012. Visitors of the exhibition will learn that we can look past today’s differences between East and West because history shows us that the greatest scientific inventions still used today are a result of the partnerships of scientists from across the world.

Marium Sattar grew up in London and is currently pursuing her Master’s degree at Columbia University’s School of Journalism.