What Are the Egyptian Military Planning? 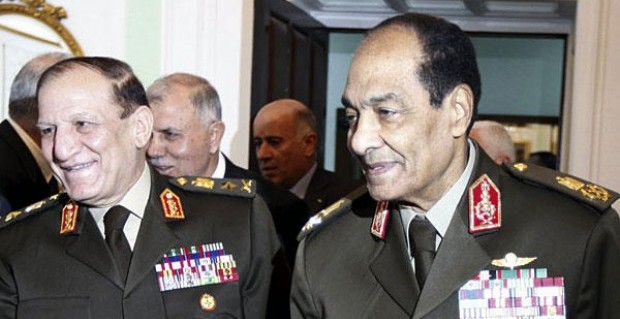 Al-Hayat reported that Egypt’s military council is making odd demands on the eve of the presidential election scheduled for May 23-24. The Supreme Council of the Armed Forces (SCAF) says it wants the new constitution to be drafted before the president assumes office. Presumably this demand derives from the old constitution’s provisions that give the president enormous powers, powers the military don’t want to place in the hands of a civilian president. The military is also hinting around about the necessity of a presidential council.

The April 6 organizations, New Left youth, have called for a big demonstration by a broad range of political forces on Friday to protest continued military rule and interference in the political process. So far a lot of political parties are indeed saying they will support the call, including the liberal Muslim party, Wasat, the secular Wafd, and others. April 6 – Ahmad Maher is said to have distributed 122,000 leaflets calling on people to participate, and April 6 – The Democratic Front has distributed over 100,000. The April 6 groups, which have split, have their origins in student support for a textile workers strike at Helwan on April 6, 2008. They were key to calling for the Jan. 25, 2011, demonstrations that began the Egyptian Revolution and the overthrow of Hosni Mubarak.

The April 20 demonstration at Tahrir Square will demand a representative constituent assembly and the withdrawal of the military from politics.

It is mysterious why the military made these demands. The constitution cannot possibly be drafted before the July 1 deadline for the officers to return to their barracks. The parliament’s attempt to establish a constituent assembly has been struck down by the courts as unrepresentative (it was heavily dominated by the Muslim Brotherhood and by members of parliament). A new assembly has to be appointed that is more representative, and then it has to convene and begin working on a new constitution. No one thinks all this will happen in the space of 10 weeks.

In addition, the military has started talking about setting up a “presidential council.” It is not clear what in the world they mean by this. In essence, the 22-man officer council comprising SCAF now serves as a collective presidency, with Field Marshall Husain Tantawi as first among equals. Do the officers want to create a smaller subset to rule the country until the new constitution is finished, and do they envision making the elected civilian president just cool his heels until that point?

I saw leading presidential candidate Amr Moussa on Aljazeera this morning insisting that there be a complete and immediate turnover of power to the new president on his election.

Moussa has just put forward his platform, which concentrates on lifting Egyptians out of poverty. He launched it from a poor neighborhood. Moussa is a liberal secularist, a long time secretary general of the Arab League and a former Egyptian foreign minister who broke with the Mubarak regime. When I was in Egypt last summer, Moussa was doing things like attending the weddings of working class people, as a way of campaigning. He is among the few presidential candidates with that sort of common touch. Even though the Muslim fundamentalists got a landslide in last fall’s parliamentary elections, it would still be possible for Moussa to pull out the presidency.

2 Responses to What Are the Egyptian Military Planning?