Why Gaddafi Should be Fearful of History 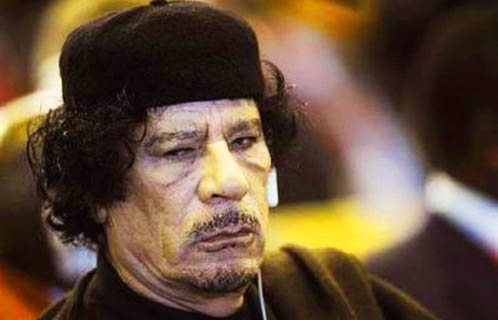 Libya’s President, Colonel Muammar al-Gaddafi, has unleashed a murderous response to the the calls for reform launched by unarmed protesters in the east of the country.  His recipe for regime longevity is to kill those who say No!

So far over a hundred Libyans have been killed and hundreds more wounded in clashes with Gaddafi’s security apparatus.  In the face of near silence from the world (Mr Obama, Hello!) we have to thank the often-maligned Human Rights Watch NGO for informing us of the extent of this lethal crackdown.

In 1969 Gaddafi overthrew the Senoussi monarchy and fashioned the Libyan Arab Republic on Nasser’s Egyptian model.

In a stroke of genius he set up in 1977 the world’s only super- or ultra-republic, the so-called jamahiriyya.  Theoretically it is a state where power and wealth are in the hands of the people.  Also theoretically, Gaddafi is not a president but merely the Leader of the Revolution, or more officially Brotherly Leader and Guide of the Revolution.  Realistically, he’s recognized the world over as head of state and treated as such and certainly holds the reins of power in Libya.

He is now seeking to crush the rising tide of popular anger against his rule.  Colonel Gaddafi would do well to remember that eastern Libya was the birthplace of Omar al-Mukhtar, the legendary leader of Libyan resistance to the brutal Italian occupation of the country.  Captured by the Italian fascists in 1931 and condemned to death, the 69-year-old was executed shortly thereafter.  He is reported to have defiantly told his Italian captors:

We do not surrender..  We win or we die..  This is not the end..  You will have to fight the next generation and the generations that follow.. As for me..  I will outlast my executioners.

Omar al-Mukhtar was hanged at a concentration camp in Solluch, about 48 km from Benghazi, the eye of the storm now consuming Gaddafi’s regime.

Gaddafi has taken Libya on a torturous, tortuous 40-year-long road of Arab unity, revolutionary zeal, isolationism and sanctions, military forays into African states and finally pan-African unity. Today he is the King of Kings of Africa, or something like that.

He will seek to crush the rising tide of popular anger against his rule. But being a nomadic son of the desert he should know better than anyone else that the desert sands are always shifting and if one remains in one place for long virtually everything moves along even if the encampment remains in place.