The U.S. and Muslim Brotherhood: A Match Made in Heaven? 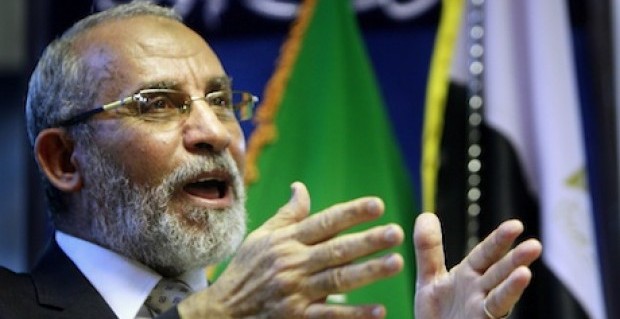 Egypt continues to struggle with violence in the wake of political uncertainty and transition. Yet despite the domestic turmoil, there has been a positive development – the relationship between the United States and the Muslim Brotherhood has improved after decades of mutual distrust. In January, high-level US and Muslim Brotherhood officials met and posed for pictures at the headquarters of the Brotherhood-affiliated Freedom and Justice Party (FJP) in Cairo. This meeting constitutes the first step towards greater understanding between the two sides and an acceptance of new political realities in the region.
For decades, the Muslim Brotherhood criticised the United States for supporting dictatorships in the Arab world. On the other hand, the United States never believed political Islamic movements to be capable of adopting and abiding by the rules of democracy and maintaining US interests in the region.

This gradual thawing in US-Muslim Brotherhood relations wouldn’t have taken place without recent political changes, primarily the results of Egypt’s parliamentary elections, in which the FJP garnered roughly 45 per cent of the powerful lower house seats. Pragmatism on both sides calls for each party to try to understand the other better. Simply put, the Muslim Brotherhood and the United States both have a vested interest in maintaining a relationship with each other.

On the other hand, for the Muslim Brotherhood and the United States to enter into a partnership, they will need to start a real and open political and economic dialogue. A less interventionist approach in Arab and Muslim countries coupled with more economic assistance would be high on the list of potential Brotherhood gains from this partnership. In order for the new model to succeed, stereotypes of the “radical Islamists” and “imperialist America” need to fall by the wayside. By honestly brokering a just and lasting solution to the Arab-Israeli conflict and treating the rising democracies in the Arab world as equals, the United States can help the Brotherhood get rid of its stereotype of an “imperialist America”. And by reconciling their ideology with their new responsibilities, and understanding American interests in the region, the Brotherhood can help Washington to move past the image of the group as “radical Islamists”.

On an economic level, the Brotherhood will likely seek an increase in US foreign aid to Egypt. US aid to Egypt currently includes $1.3 billion in military aid and $250 million for economic development, education and related causes; the United States has provided aid to Egypt, accompanied by political pressures, over the past three decades. The Brotherhood can aim for an economic partnership that ensures more American investments are injected into Egypt’s crumbling economy, as well as a free trade agreement allowing more Egyptian exports into the American market. Given its ideological inclination toward a free market economy, the Brotherhood can learn a great deal from America’s capitalist model.

While the Brotherhood will not go as far as adopting an American-inspired neo-liberal approach to the economy – as such an approach was one of the reasons Egyptians revolted against the Mubarak regime – the United States might still help the FJP create a blueprint for an efficient economy that can compete in increasingly globalised markets. For example, American experts can assist the new government of Egypt in developing an economic program that can help Egyptian industries manufacture a considerable number of goods that the country currently imports. If it is efficiently implemented, such a program can trigger a breakthrough in the Egyptian economy and help lift millions out of poverty.

The Brotherhood is in fact currently preparing a “Renaissance Project” which is meant to achieve high rates of economic growth through boosting industrialisation and exports, adopting good governance, and triggering breakthroughs in education and health services. The ultimate aim of this project would be to transform Egypt from a rentier economy – which primarily counts on revenues from oil, the Suez Canal and expatriates’ remittances – to an economy growing through industrial and agricultural exports. In drafting this project, FJP senior members are flying to Japan, South Korea, Singapore, India, Turkey, Germany and Brazil to learn from international success stories. Their next stop could be Washington, where they can benefit from American expertise in achieving high levels of growth, industrialisation and boosting small and medium enterprises and good governance.

The forging of an open relationship between the United States and the Brotherhood might have stalled for decades. Yet now, more than ever before, it seems the right time to begin to explore such mutually beneficial and sustainable partnership.