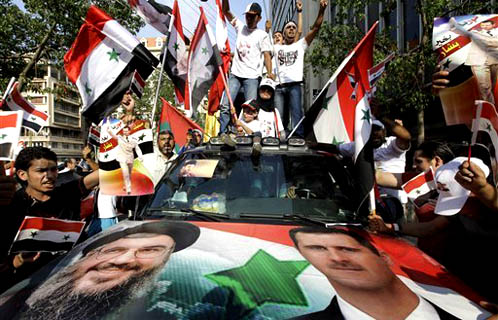 Pro-government rallies in Syria are a bit like carnivals. There’s lots of noise, music and colourful banners, and the whole family gets to join in. Mum, dad, kids and crazy, old grandpa all come along for the fun.

There’s something vaguely sinister about all that forced fun. It’s not natural. The same thing applies to the demonstrations. While there is no doubt that people are there by choice, grateful for the opportunity to show that many Syrians are still faithful to their leader, the chain smoking mukhabarat agents and truncheon wielding policemen keep you somewhat on edge.

These pre-ordained and rigidly controlled spectacles of loyalty are even more frequent now than they were at the start of the Syrian unrest 4 months ago. And they have evolved. The first demonstrations were more like late night drag races. Hardcore supporters would screech around the new city, honking their horns and keeping everyone awake at night.

Later, the demonstrations took the form of mass car rallies, the Arab version of vintage automobile enthusiast gatherings in Kent. Thousands of cars, minivans, buses and taxis took part in a perpetual orbit around the Ummayad roundabout. If Syria had any environmentalists, they wouldn’t have been happy.

The government took things further a week or two later when they encouraged about half of the Damascus population to take to the streets, this time on foot.

When I say encouraged, I mean it in the mukhabarat’s sense of the word. School children and government employees were bussed in from across Damascus. University students were pushed out of their accommodation and threatened with arrest should they decide to stay at home.

Security agents herded students out of the campus and then refused entry to anyone trying to get back in. Because if you’re in class, then you’re not out on the streets declaring your love for Bashar.

But these were badly organised, uncouth affairs. As the opposition protests evolved and matured, so too would the pro-government rallies. Recent events, and they are now indeed events, involve stages, speeches and live music. The guys with little stalls selling flags and Bashar t-shirts turn up hours before to secure the best positions. Invitations are now even sent out via text message to the entire population of Damascus.

Where to next for pro-government rallies? Expectations have been raised and regime supporters will now want ever greater events. Maybe celebrity appearances would be a good starting point; it seems to work at American election gatherings.

And as Ramadan sets in, few people will want to shout and wave banners while they fast. But even in the evenings they will need more reason to leave home and their favourite Ramadan season TV series. Might I suggest free, government-sponsored Iftar meals on Umaween Square followed by some chanting and flag waving?