The Real Meaning Behind the Picture: Man’s Inhumanity to Woman 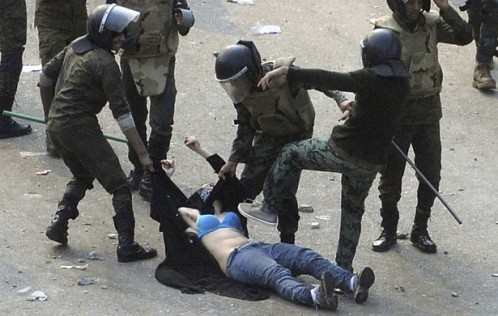 There it is above: the picture that sums up the resistance to political renewal more than any other image possibly could. It has been flashed across the world: a woman’s body exposed to anonymous male aggression. The issue is less the moment of an ongoing event which has riveted attention for almost a year than its symbolic depth. There are other images of security men beating protesters, including women. There are far more brutal shots of bloodied corpses and disfigured bodies. But this is the kind of picture that launches a thousand and one more protesters. Not only within Egypt. It is the kind of image that should shock us all, because it exposes an ugly truth we do not want to admit.

This is the kind of picture where the meaning far outstrips the specifics of the event. We do not know, nor do most people want to know, who she is or what she said or why she was singled out (if she was the only one), because she stands for the fragility of all protests against raw power. The reality is that force is entrenched. The purpose of military and security is to implement the policy of those who define power. Yes, there are revolutions and mutinies, but the need to control always wins out after a political house is “cleaned.” At times the power enforcers will give a little, but there is a point at which the batons are brandished and blood pours from the bodies of those who dare defy power.

What could this woman, dressed in the symbol of supposedly protective modesty — the hijab — have done to receive such treatment? Did they think she concealed an AK-37 beneath her black cover? Did they think any woman on her own posed a danger to men armed with crowd control equipment? Did they stop and think she is somebody’s daughter, probably somebody’s sister, perhaps someone’s wife or mother? No, because that is the ultimate tragedy of controlling protests, whether here on a Cairo street or a policeman spraying Occupy Wall Street young women with pepper spray. The only thing different this time is that the moment has been captured on film. It will never really be over, but replayed over and over again as a reminder that the violence never ends against those who dare protest a monopoly on violence.

While this beating was happening, several Egyptian protesters were killed and far more people were being eliminated in Syria. Such deaths are a daily occurrence in Yemen. Iraq and Afghanistan have not ceased to be killing fields. So why does this particular image have such power? Perhaps because it can resonate on all sides. For the liberal here is the epitome of woman’s ultimate lack of defense against male power. She had not stripped her own clothes off; she came to the square in the modest dress that was supposed to protect her, to set her off as immune to such actions. For the conservative here is the shame of exposing the body of a woman in public, not that of a criminal or a sorceress but a woman who dressed Islamically.

But there is another angle to this image that goes far beyond Egypt. Men virtually everywhere expose women’s bodies for their own perceived needs. On a gender scale the only real difference between this image and a simulated sex attack in a pornographic shot is that the woman is acting for money in the latter. But in both cases the message is that men are the ones who control women. It is a male power play to clothe the woman in any kind of dress and it is an ultimate male right to remove those clothes to suit his own purpose. A woman’s body is for the male to define. The young Egyptian blogger who posed naked, or nearly so, to speak up for freedom over her own body was roundly criticized by liberals and conservatives alike for rocking the voting public’s boat. How dare she defy the norm and expose her body voluntarily. It would only give more votes to the Islamic parties: such was the fear. But the issue is never really about the naked body, which men desire at almost any cost, but the fact that a woman dared defy the demanding male gaze by not letting the male strip her unilaterally or commercially. Look at the image above and look at the image of the blogger. If you see no difference, than you are the baton the security men wield against a defenseless body.